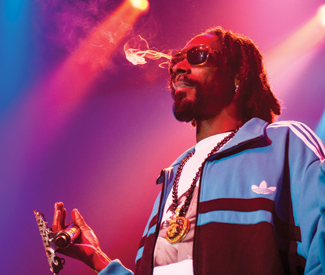 STREET SEEN Snoop wore rhinestone-dripping dichotomy to his 420 concert at the Fillmore. Trust, I was stoned enough to come up with theories based around it.

This year’s preposterous stoner holiday weekend in San Francisco featured a Haight Street-Hippie Hill clusterfuck that snarled traffic lanes for those hoping to flee the THC clouds for lands with slightly more manageable level of good vibes. Down South in Santa Cruz, cops confiscated a two-pound joint stuffed with an estimated $6,000 worth of Cali green from the traditional festivities in the hinterlands of the town’s UC campus.

I stayed far from such daytime fray, though we did manage to snap some photos of Hill-bound bridge-and-tunnelers seeking the 71 bus in their UNIF “Weed Be Good Together” tank tops (available, of course, at Urban Outfitters for some astronomical sum.) They seemed nice enough. I hope they weren’t the ones who left Golden Gate Park trashed with 10,000 pounds of garbage. Yes, that’s an actual park worker estimate.

Not mad at tasteful stoner styling. All park photos by Caitlin Donohue

My camera and I opted for the slightly more local version of 420 at Dolores Park, where neon Spring Breakers fashion trumped pot leaves and the gentleman proudly sporting a Rastafarian flag as a cape was the exception, rather than the bleary eyed rule to the sunburning throngs. Capturing flicks of various, impressively large picnic buffets, I was proud of my fellow stoners for the most part. Has weed culture progressed to the point where we need not don fake dreadlocks or shiny plastic leaf necklaces to proclaim our affinity to legalization? Down.

Later that evening, after clearing the multi-layered gauntlet of security at the Fillmore (I don’t remember there being metal detectors the last time I came through for a hip-hop show, granted that was for Macklemore) and waiting for his hour-late, $75-ticket appearance, Snoop Dogg put on a predictably fun show. “Classic smash hits” were performed, as promised by the show’s promotional materials. Nate Dogg was piped in for choruses, back from the dead. The crowd sang along to each song, unchallenged by the repertoire of a man as familiar to the world’s hip-hop fans as the MTV logo. He covered “Jump Around,” but even this seemingly unnecessary riff seemed in keeping with much of the first half of the show’s reliance on material from eras gone by.

All Snoop photos by Matthew Reamer

But pacifist, Bunny Wailer-blessed Snoop Lion and his Major Lazer-produced album Reincarnated was entirely absent. Perhaps I was the only one harboring hopes of a surprise appearance by tween daughter Cori B. — whose turn on the hook for “No Guns Allowed” I like to imagine as payback from Daddy for the time those cops found firearms in the family home.

You could see it in his bling, this lack of commitment to his new persona. Though a rhinestone lion swung from Snoop’s slim neck, far more apparent was the garish fist-covering knuckle “Snoop Dogg” piece, which partially obscured his microphone. One wonders if the Lion persona will stick around long enough for Snoop to compile an impressive, be-maned collection of accessories. Maybe not — much of the shtick seems redundant for a rapper already famous for smoking more weed than federal agent bonfires in Humboldt County.

But old school the entirety of the set was not. Singles by Katy Perry and Bruno Mars in which Snoop guest-raps each made the hip-hop purists in the crowd spit. Despite the overwhelming scorn around me, I bopped to Perry’s “California Girls” — but even I couldn’t stomach the aging rapper juxtaposed with the chorus of Mars’ “Young, Wild, and Free”. I wondered if he could be convinced that “No Guns Allowed” ventures far closer to “classic good hit” arena than pop prince crossovers ever will.

Uhhhh, like, what else happened? Oh right, there was a shooting at Denver’s massive 420 celebration, the first since Colorado legalized the stuff for recreational use. The news would have been a bummer, had I not gotten to catch up with my girl Coral Reefer, who was a speaker on the Cannabis Cup’s first panel discussion about social media and weed.

“It has been amazing,” said the chipper Reefer, who runs a near 24/7 train of political information and nug glamour shots on her various social networks and Stoney Sunday YouTube potcasts. “Colorado’s been so hospitable and generous.”

News of the shooting — which left two attendees at Denver’s Civic Center Park with non-life-threatening injuries and several with injuries sustained while being trampled during the ensuing chaos amid the estimated 80,000 crowd — didn’t reach attendees at the Cup until a few hours later, Reefer said.

“It was complete sadness. Everyone I spoke to was so disappointed that we had experienced such a great day of community and positive vibrations, and a few miles away something so terrible had happened.”

But at the Cup itself, peace reigned, with the possible exception of the grumblers stuck in the at-times hours-long wait to get in. Reefer says the sophistication of marijuana concentrates continues to improve at these mega-events, and the variety of pot accoutrements — like local brands of vape pens — is impressive. “There’s so much issue with crossing state lines with cannabis products, it seems like each state has developed their own economy when it comes to cannabis goods.”

For Reefer, even the chaotic Civic Center scene signified a growing interest in marijuana she sees as positive. “We need to understand there are millions of people on our side and we need to be prepared when they come to us,” she said.

She also wanted to reinforce that this is one party the Golden State wants in on. “More and more people are celebrating cannabis in Colorado. California needs to step up and legalize, because it’s getting really fun out here.”

Perhaps — a la Snoop’s schizophrenic accessories — someday no one will feel the urge to don crocheted red-yellow-and-green beanies, or make a reggae album, merely to proclaim allegiance to marijuana. Dear government, if we drop the culturally derivative stoner trappings, will you accept that weed has been a part of us all along?