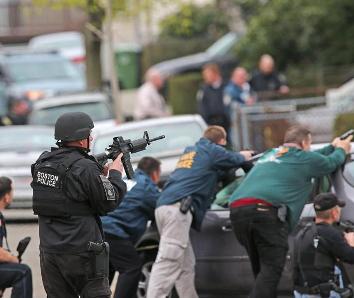 Ever since the horrible, awful bombing at the Boston Marathon, I’ve been doing what every crazy newshound does and spending far too much time on the Internet trying to get the latest scrap of information. This morning, none of us could drag ourselves away from the developing story.

And I have to say: There are thousands of web sites covering this, mostly be aggregating other people’s content. But the real work of finding and reporting news has been done by the old-fashioned traditional mainstream media that we all so freely dismiss as dinosaurs.  The New York Times and The Boston Globe have done an exceptional job, as has the Associated Press. That’s in large part because they still employ significant numbers of staff reporters, with the experience and contacts to accurately cover this kind of story.

The MSM screws up a lot, and allows politicians to avoid accountability, and has all sorts of biases. But nobody else has the ability to cover a tragedy and disaster like this.

Of course, not all is perfect. The New York Daily News and CNN have screwed up badly. The rightwingosphere is so obsessed with Muslim Terrorists that it’s seeing them everywhere, creating them out of paranoid visions if necessary.

But if there weren’t newspapers and broadcast outlets with old-fashioned reporting staff, we’d be far less informed and more reliant on official law-enforcement sources. The old business model is falling apart, but there’s still a need for actual news outlets.

And for my money, the absolute best source of accurate, fair, complete, and insightful coverage has been that very, very old medium — raido — and that old goverment-funded institution, NPR.

Something to think about when a real major news event happens.