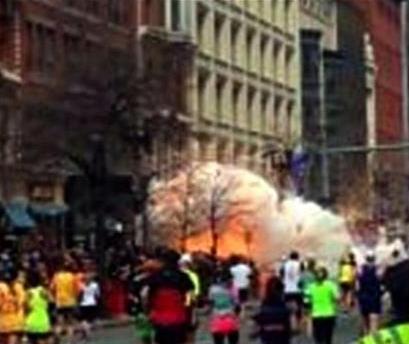 It’s hard to know what to say about the Boston Marathon bombings. Except that I don’t believe the guy on the roof did it, and I don’t believe the government did it to get its hand down our pants, and nobody has any idea if some organized domestic or foreign terrorist group was responsible or if it was a lone nut. Whoever it was, the person doesn’t seem to have been overly sophisticated in the making of explosive devices; this one was pretty crude. Or maybe the bombmaker knew exactly what he (could be she, but there aren’t many female mad bombers) was doing, and wanted to look like an amateur.

We do know this wasn’t a suicide bomber. The perp wanted to get away.

I suspect we will find him soon enough. There are so many agencies and people looking for the bomber; unless this was the work of someone who remotely triggered the bombs by cell phone from somewhere far, far away, there’s not going to be anywhere to hide. Also: So many cameras everywhere these days. The bomber — or the person who placed the bombs — is on film in downtown Boston. Almost certainly.

As we did after 9/11, we will probably over-react. New invasive rules on transport systems, more spying, more surveillance …. all things that wouldn’t have prevented a single angry bomber from carrying out the attacks. People who are opposed to gun control will say: See! Gun-control laws won’t stop pressure-cooker bombs!

There will be increased security at public sports events. I don’t know how they’re going to deal with Bay to Breakers, which not only winds through the city, past lots of places where bombs could be hidden, but also involves thousands of trash cans and porta-potties. You can’t get rid of those; the people who live along the course would be livid when their front yards and driveways became trash heaps and pissoirs. Searches will be more serious at AT&T park, which means lines will be longer. We can live with that.

If you want some perspective on what it feels like to be terrorized, check out my old friend Don Ray’s blog on “the sitting duck syndrome.” He notes:

The bombs that exploded at the finish line of the Boston Marathon have created the same response in people across the United States. The repeated blasts (repeated and repeated and repeated on television) have communicated with the primitive, “I have to survive” reptilian brains of millions of people. It has put them on notice that, “It could happen here. Today. Tomorrow. Even right now.” Welcome to the world of terrorism. It’s very effective. People in other parts of the world already know about this. So in the coming weeks and months, some of us will feel the need to carry weapons or to avoid crowds completely. Others of us will look at the violence that’s happening in distant parts of the world and maybe begin to become a little bit empathic. Maybe — just maybe — some of us will equate U.S. drones and missiles and bombs with the sitting duck, unexpected violence that is the intended byproduct of terrorists.

Not to get all foreign-policy preachy here, but that’s something to think about.