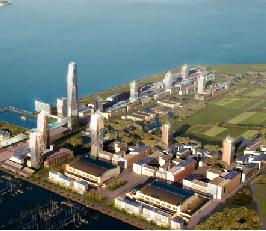 So Mayor Lee goes to China with plans to celebrate the signing of a deal that would bring $1.7 billion in Chinese investment into the lagging Treasure Island redevelopment project, and instead the whole thing falls apart. Not good for the cross-Bay rivalry: Gov. Brown, a former mayor of Oakland, landed $1.8 billion in Chinese money for his city’s big project, while Lee lost out.

But there’s a bigger problem. It’s hard to see how anyone would want to invest in Treasure Island right now, when:

The island is sinking,

The Bay is rising,

There’s only one way on or off the island, and it’s already so crowded that a modest event like the Treasure Island Flea Market ties up traffic in both directions for hours, and

The place is radioactive.

Matt Smith and Katherine Mieszkowski of the Bay Citizen did what the Navy and the city of San Francisco refused to do. They went out with a couple of red buckets, dug up some soil and had it tested for Cesium-137. Bingo: The place suffers from far worse contamination that anyone was letting on. And there might be even more:

Until the early 1990s, the Navy operated atomic warfare training academies on Treasure Island, using instruction materials and devices that included radioactive plutonium, cesium, tritium, cadmium, strontium, krypton and cobalt. These supplies were stored at various locations around the former base, including supply depots, classrooms and vaults, and in and around a mocked-up atomic warfare training ship – the USS Pandemonium. CIR’s samples were taken from under a palm tree 50 feet from a classroom building where cesium-137 was kept, according to military archives. A 1974 radiation safety audit identified cesium samples used and stored there with radioactivity several times the amount necessary to injure or kill someone who mishandled them. In 1993, shipping manifests from the same building showed even greater amounts of cesium-137 taken away from the same site that year.

Now some experts say that development plans need to be put on hold while the entire place is checked out more carefully:

“The fact that there is a level above standards is a clear mandate for further study and assessment of the extent of contamination and its origin,” Beyea wrote in an email, adding that more systematic testing is particularly important given that public play areas are planned nearby. “Building a playfield is not an appropriate plan at this time,” he wrote, “given the tendency for little children to put things in their mouths.”

Would you loan a couple billion dollars for a development project on that site?

In theory, of course, the Navy is responsible for the cleanup. In practice? Good luck with that. The Pentagon is blaming the sequester for forced budget cuts in everything including the Blue Angels; you think anyone’s going to write a very big check any time soon for a very complex environmental clean-up job on an artificial island that will soon be underwater?

I used to think the best thing to do with Treasure Island was to leave as much open space as possible for soccer and baseball fields, then slowly let it sink back into the Bay. Now apparently it’s a bad idea even to have kids playing there.

And what about the people who already have moved into housing at TI? Anyone going to test their soil?

Anyone want to take bets on whether anything much is ever going to be built there?