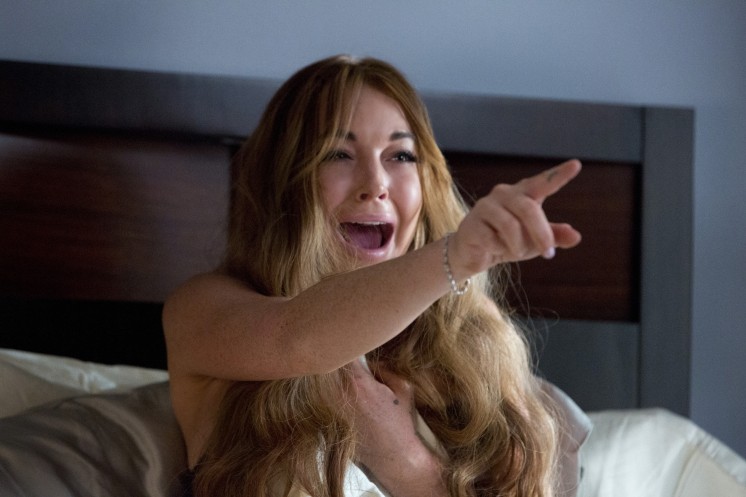 Better order your popcorn with a side of open-mindedness this week, what with To the Wonder (meh) and Upstream Color (woo!) launching themselves at audiences. Less experimental types can settle for ensemble drama Disconnect or Scary Movie 5, the latest in the pop-culture parody series.

Read on for the rest of this week’s new films, including the latest from Danny Boyle and Robert Redford, plus a perfectly-timed-to-maximize-on-the-start-of-baseball-season Jackie Robinson biopic.

The Company You Keep Robert Redford directs and stars as a fugitive former member of the Weather Underground, who goes on the run when another member (Susan Sarandon) is arrested and a newspaper reporter (Shia LaBeouf) connects him to a murder 30 years earlier during a Michigan bank robbery. Both the incident and the individuals in The Company You Keep are fictive, but a montage of archival footage at the start of the film is used to place them in the company of real-life radicals and events from the latter days of the 1960s-’70s antiwar movement. (The film’s timeline is a little hard to figure, as the action seems to be present day.) Living under an assumed name, Redford’s Nick Sloan is now a recently widowed public interest lawyer with a nine-year-old daughter, still fighting the good fight from the suburbs of Albany, NY — though some of his movement cohorts would probably argue that point. And as Nick heads cross-country on a hunt for one of them who’s still deep underground, and LaBeouf’s pesky reporter tussles with FBI agents (Terrance Howard and Anna Kendrick) and his besieged editor (Stanley Tucci) — mostly there to pass comment on print journalism’s precipitous decline — there’s plenty of contentious talk, none of it particularly trenchant or involving. Redford packs his earnest, well-intentioned film with stars delineating a constellation of attitudes about revolution, justice, and violent radical action — Julie Christie as an unrepentant radical and Nick’s former lover, Nick Nolte and Richard Jenkins as former movement members, Brendan Gleeson as a Michigan police detective involved in the original investigation, Chris Cooper as Nick’s estranged and disapproving younger brother. But their scrutiny, and the film’s, feels blurry and rote, while the plot’s one major twist seems random and is clumsily exposed. (2:05) (Lynn Rapoport)

42 Broad and morally cautious, 42 is nonetheless an honorable addition to the small cannon of films about the late, great baseball player Jackie Robinson. When Dodgers owner Branch Rickey (Harrison Ford) declares that he wants a black player in the white major leagues because “The only real color is green!”, it’s a cynical explanation that most people buy, and hate him for. It also starts the ball curving for a PR shitstorm. But money is an equal-opportunity leveling device: when Robinson (Chadwick Boseman) tries to use the bathroom at a small-town gas station, he’s denied and tells his manager they should “buy their 99 gallons of gas another place.” Naturally the gas attendant concedes, and as 42 progresses, even those who reject Robinson at first turn into men who find out how good they are when they’re tested. Ford, swashbuckling well past his sell-by date, is a fantastic old coot here; his “been there, lived that” prowess makes you proud he once fled the path of a rolling bolder. His power moves here are even greater, but it’s ultimately Robinson’s show, and 42 finds a lot of ways to deliver on facts and still print the legend. (2:08) (Sara Maria Vizcarrondo)

My Brother the Devil Though its script hits some unsurprising beats, Sally El Hosaini’s drama is buoyed by authentic performances and a strong command of its setting: diverse London ‘hood Hackney, where sons of Egyptian immigrants Rashid (James Floyd) and Mo (Fady Elsayed) stumble toward maturity. After his best friend is killed in a gang fight, older “bruv” Rashid turns away from a life of crime, but dropping his tough-guy façade forces him to explore feelings he’s been desperately trying to deny, especially after he meets photographer Sayyid (Saïd Taghmaoui). The only thing he knows for certain is that he doesn’t want his little brother to start running with the drug-dealing crew he’s lately abandoned. The less-worldly Mo, already dealing with a tidal wave of typical teenage emotions, idolizes his brother — until he finds out Rashid’s secret, and reacts … badly, and the various conflicts careen toward a suspenseful, dread-filled, life-lessons-learned conclusion. Added bonus to this well-crafted film: sleek, vibrant lensing, which earned My Brother the Devil a cinematography prize at Sundance 2012. (1:51) (Cheryl Eddy)

No Place on Earth “Every cave I enter has a secret,” muses caver Chris Nicola in his clipped New York accent at the start of No Place on Earth. An interest in his family’s Eastern Orthodox roots brought him to the Ukraine soon after the Soviet Union dissolved; while exploring one of the country’s lengthy gypsum caves, he literally stumbled over what he calls “living history:” artifacts (shoes, buttons) that suggested people had been living in the caves in the not-too-distant past. Naturally curious, Nicola investigated further, eventually learning that two families of Ukrainian Jews (including young children) hid in the caves for 18 months during World War II. Using tasteful re-enactments and interviews with surviving members of the families, as well as narration taken from memoirs, director Janet Tobias reconstructs an incredible tale of human resilience and persistence; there are moments of terror, literally hiding behind rocks to escape roaming German soldiers, and moments of joy, as when a holiday snowfall enables precious outdoor playtime. Incredibly, the film ends with now-elderly survivors — one of whom lived just seven miles from Nicola in NYC — returning to “say thank-you to the cave,” as one woman puts it, with awed and grateful grandchildren in tow. (1:24) (Cheryl Eddy)

Trance Where did Danny Boyle drop his noir? Finding the thread he misplaced somewhere along the way from Shallow Grave (1994) to Slumdog Millionaire (2008), Boyle strives to put his own character-centered spin on the genre in this collaboration with Grave and Trainspotting (1996) screenwriter John Hodge, though the final product feels distinctly off, despite its Hitchcockian aspirations toward a sort of modern-day Spellbound (1945). Untrustworthy narrator Simon (James McAvoy) is an auctioneer for a Sotheby’s-like house, tasked with protecting the multimillion-dollar artworks on the block, within reason. Then the splashily elaborate theft of Goya’s Witches’ Flight painting goes down on Simon’s watch, and for his trouble, the complicit staffer is concussed by heist leader Franck (Vincent Cassel). Where did those slippery witches fly to? Simon, mixed up with the thieves due to his gambling debts, cries amnesia — truth appears to be locked in the opaque layers of his jostled brain, and it’s up to hypnotherapist Elizabeth (Rosario Dawson) to uncover the Goya’s resting place. Is she trying to help Simon extricate himself from his impossible situation, seduce Franck, or simply help herself? Boyle tries to transmit the mutable mind games on screen, via the lighting, glass, and watery reflections that are supposed to translate as sleek sophistication. But devices like speedy, back-and-forth edits and off-and-on fourth-wall-battering instances as when Simon locks eyes with the audience, read as dated and cheesy as a banking commercial. The seriously miscast actors also fail to sell Trance on various levels — believability, likeability, etc. — as the very unmesmerized viewer falls into a light coma and the movie twirls, flaming, into the ludicrous. (1:44) (Kimberly Chun)