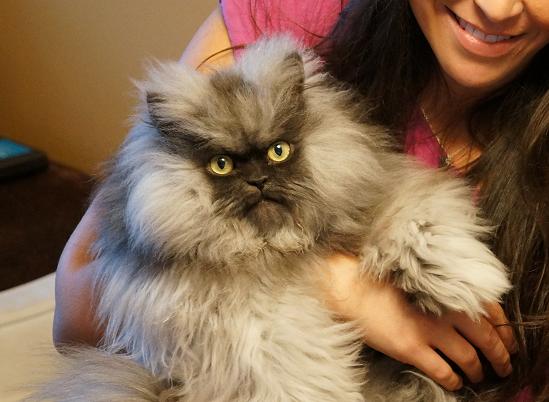 I got — and am continuing to get — in quite a few conversations with loved ones and people I get stuck chatting with at parties, about favorite Internet cats. Such has been the all-consuming process that is this week’s “Cat Pack” cover story. And shocked, I am shocked each time someone is ignorant of Colonel Meow‘s charms. The luxuriously eyebrowed black-and-gray Persian longhair from Washington State, and his owner Anne Marie Avey’s megalomaniac prose have entered our cultural vernacular.

And so I offer you this, in its full and unabridged version — an interview with Colonel Meow. No, not an interview with Avey — look to the cover story for the voice of Colonel’s human slave. The Colonel was good enough to respond to me himself.

Some day I wish to squeeze him. For now, his words:

SFBG: Hi Colonel, it’s a pleasure. So why do you think so much attention is being paid these days to Internet cats?

CM: I don’t think it’s strange that cats get so much attention. It’s about time cats get the respect we deserve. We used to be beside every world leader, addressing their subjects, being hand fed tuna, and getting major press left and right. But now we are demoralized to the short 15 second videos of us licking our balls without privacy, sitting in boxes like buffoons, pleading for food like beggars. I can only hope that my fellow Meowmericans will stand up to their slave beasts and make them post relevant content that shows our superior skills compared to “stupid pet tricks”. I’m confident we will grow and realize our true potential. There’s a need that the people want, and that need is more cat videos.

SFBG: Describe the average day in the life of a hairy Internet celeb.

SFBG: How much time do you spend on photoshoots?

>>CLICK HERE FOR AN INTERVIEW WITH LUNA THE FASHION KITTY, ANOTHER ONE OF THIS WEEK’S COVER MODELS

CM: I’m constantly on the go. So my slave beasts take all the photos. Sometimes they put themselves in the picture, but I fixed that problem by Photoshopping their heads onto Jabba the Hutt. You can steal that if you want.

SFBG: Describe your touring experiences. What were living conditions like for you?

CM: I’ve done a few tours in Afghanistan, but it was mostly to support a brand of cat food that’s illegal in the states.

SFBG: What do you hope will be your cultural legacy?

CM: Oh, Caitlin, I don’t need a LEGACY. (chuckles) But I will say if I make it a better place for minions, than that’s all that matters. And by better place I mean cats for people to come and worship daily, cat videos and pictures on every jumbo screen in America, scotch sold on every street corner, and The Hunger Games: Canine Edition.

SFBG: Who do you see as your role models?

CM: Genghis Khan, Shaka Zulu, and Charlie Sheen. They really know how to top themselves.

SFBG: What does success look like for Colonel Meow?

CM: Success is a litter box full of turds, you have to be willing to dump somewhere else when the time comes.