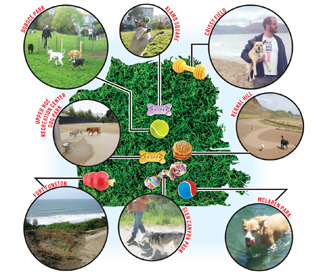 San Francisco has more dogs than children, which might be a comment on the price of housing — even the largest canine companion doesn’t need a bedroom. But with all of those furry beasts seeking exercise in a dense urban area, the city’s made a point of finding places for dogs to run, romp, and play — with some success, and some … well, not such great success.

We’ve taken on the task of finding some of the best dog parks, and offer this opinionated guide. Remember, not all dog parks are created equal. Some are great if you just want open space to toss a ball; others are better for the dog that likes to wander around and explore. Some are perfect for the social animal that loves lots of canine company; some serve the more solitary types.

Our ratings reflect the level of cleanliness (will I be constantly stepping over, or in, poo?), friendliness (are the park-goers, human and canine, nice to be around and welcoming, or is there a cliquishness or conflicts between different types of users?) and dog-fun terrain (Just dirt? Lots of trees and bushes? Gophers to chase? Water to drink — and play in?)

Lots of room on this often-windy hilltop. Hiking trails offer spectacular city views; paved roads are nice for jogging. Amazing rock formations surround a couple of open flat areas for romping and ball-chasing. Dog and human water fountains. Very friendly; everyone who uses the place is used to off-leash dogs. Sadly, some take the vegetation and rocky hillsides as an excuse not to clean up; if you’re off trail, watch where you step. Entrances at the top of Bernal Heights Boulevard and at Folsom and Ripley.

You can walk a few hundred yards into Glen Canyon and feel miles away from the city. The canyon floor, with a creek (mud! exciting!) running through it, is cool and shady with trees, thickets, and blackberries. The hillsides are grassy, steep, and sometimes attract rock climbers. Most days, there are off-leash dogs walking and playing — but there are also picnic areas, ball fields, and a (fenced) kids’ playground where it’s best not to allow dogs to roam freely, and sensitive habitat restoration areas where off-leash dogs can wreak havoc. Sometimes users complain about off-leash dogs; if you keep poochie on leash, it’s still a great hiking area. Absolutely do not let your dog wander off in the deeper parts of the canyon, where coyotes have made a home; it’s best for all parties if they are undisturbed.

The south side of the park is undergoing renovations right now, but you can enter at Diamond Heights and Sussex (watch the traffic, there’s no crosswalk) or at the end of Bosworth.

The second-largest park in the city is often overlooked, but it’s got some nice wooded trails — and the only pond in the city where dogs are actually allowed to go swimming. It’s not a nasty, slimy-covered puddle, either; the water’s clear and there’s a (concrete) doggie beach where your canine can ease into a dip. It’s shallow enough near shore for those with short legs and deep enough and long enough for the big dogs to have a nice refreshing swim or practice their water-retrieval skills. There’s some misinformation on the web about how to find the dog-swim area. You don’t want McNabb Lake, on the east side of the park; that’s a playground and picnic area with a nice duck pond where dogs are not terribly welcome. The parking lot for the dog area is off the westernmost part of the John F. Shelley loop, near the big blue water tower. You can see the pond from the road, and it’s a very short walk down. Bring a towel and be prepared to get wet; humans can’t swim there, but the beach is small and wet doggies love to shake.

This popular spot used to be called “dog shit park.” It’s the place where Harvey Milk famously announced his legislation mandating that people pick up their canine companions’ stinky piles. It’s a lot better now — in fact, this is a rare place where the interaction between dogs and children is well-managed and everyone seems happy. The kids are fenced off in the upper area, the dogs run free in the lower area, and people just out for some sun sit in between. Still: watch where you walk. The ghost of Harvey’s soiled shoe remains.

The dogs here tend to be a bit rambunctious, perhaps because of the limited space, so don’t be surprised if a few more aggressive ones bound up to you as you enter, which can intimidate the more skittish of both species. The (human) regulars tend to know each other. McKinley School’s Dog Fest turns the place into a grand celebration of the canine spirit every spring.

The walkable trails — surrounded by lush trees, non-native plants, and flora — that lead down to sandy dunes, cliffs, and Ocean Beach itself make up Fort Funston, a former military base, and current highly traveled dog park. In fact, it’s one of the Bay Area’s most popular mixed-use canine-friendly sites, usually sweeping the Bay Woof’s Beast of the Bay awards, this year winning “Best Hiking Trail” and a runner-up for best overall dog park. There are multiple pathways to explore, great views, and a few doggie amenities along the way. On the rare warm weekend (always with a breeze), there might be dozens of pups lapping up the cooling dribble of water from one of the small water fountains. It gets crowded (some dog owners say it’s too crowded) on the weekends, but is less congested during the week. The off-leash factor is also currently up for review, so those in charge caution owners to pick up after and keep a close eye on their pets. It’s part of the Golden Gate National Recreation Area and is operated under the authority of the National Park Service.

Park in the lot off Skyline Boulevard.

The dogs atop the sloping west side of Alamo Square Park like to play — and they do so in the rather small dirt-and-grass area allotted for off-leash fun. It’s typically a hyper bunch of small pups, chasing, fetching, leaping after frisbees, and entwining regulars in the old twisted leash dance on the vertical pull up the hill. Thankfully, the typically business and/or tech-veering dog owners in Alamo Square are usually quite friendly, pick up after their pets, and won’t give you side-eye if your darling drools on another’s chew toy. There’s also a water fountain for thirsty pups and a give one/take one plastic doo-doo bag stand at the base of the hill. But be forewarned, the other side of that hill is the one with the classic SF view of the Painted Ladies, so it’s where tour buses dump the masses for photos ops. Fido is less than welcome there without a leash, and it can get scary for less sociable pups. Plus, just below, the park dips directly into the busy intersection.

With boardwalk walkways, grassy play areas, a bombshell view of the Golden Gate Bridge, and long stretches of California coast, Crissy Field, part of the Golden Gate National Recreation Area, is a frisky pup’s beachy playland. There are even small outdoor showers, specifically for washing the sand off paws, not human feet. The regulars know where to avoid walking without a leash, and will kindly tell you so on arrival. And there’s plenty of room for running, fetching, and playing (canine) or catching up (human). Plus, check out interesting wave formations due to sand bars, and the marshy areas of the former Army airfield, first opened to the public in 2001. There’s also enough sanded open space to keep a distance from other pets, if you’re dog’s the less-than-cordial type.

Beach and Mason, in the Presidio.

This relatively diminutive fenced enclosure is more typical of suburban neighborhoods — a very pre-planned park feel. Connected to the Noe Valley Recreation Center, it’s helpful that this dog run is in the heart of the city, fully gated, and easy for humans to access, for a quick game of fetch or poop jaunt. The entirely fenced in park is great for new dog owners and those with easily spooked puppies. Weirdly, this kind of enclosure seems a rarity in the city. But other than convenience and safety (both considerably important in the pup playtime world) it offers little amenities to the average pup or companion. Also, there is sometimes a slight urine odor, likely due to the closed in nature, and while friendly, the crowd often seems more focused on getting in and out, quickly.