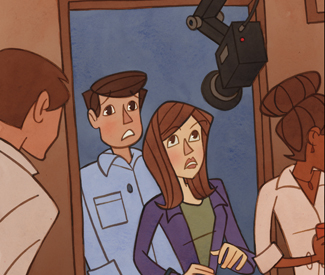 In late 2010, the SFPD proposed a draconian set of new security requirements for drinking establishments in the city, including requirements that they do video surveillance and take an image of all patrons’ identification cards and make them available to police upon request, without a warrant or any other controls (see “Going to a club — or boarding an airplane?,” 12/7/10).

That proposal ran into a wall of opposition from the American Civil Liberties Union, California Music and Culture Association, progressives on the Board of Supervisors, and others, who said such a blanket policy violates privacy protections in the California Constitution. The Entertainment Commission held a hearing on the proposal in April of 2011 and voted unanimously to reject the proposals.

At that point, they seemed to just disappear, but they didn’t. Instead, SFPD internally decided at that time to begin asking the California Department of Alcoholic Beverage Control to insert a video surveillance requirement in most new liquor licenses in San Francisco, which escaped public notice until Sup. Scott Wiener raised the issue at the April 2 Board of Supervisors meeting.

“If you have an establishment that perhaps has a track record of bad things happening, that’s one thing. But absent that, I don’t believe that this is justified,” Wiener said as he voted against the requirement in a pair of new liquor licenses. Although Wiener was alone in opposing those applications, Sup. David Campos said he shared Wiener’s concern and the pair called an upcoming hearing on the new policy.

Two days later, at the board’s Neighborhood Services and Safety Committee meeting, Wiener again raised the issue and sought to have the new requirement removed from a pair of proposed liquor licenses: Cesar’s Ballroom on 26th and 3rd streets, the latest project of veteran local club owner Cesar Ascarrunz, and Nosa Ria, a market in Hayes Valley that will import gourmet food and wine from Spain.

“It’s the exact opposite of some kind of rowdy bar or nightclub where people are going in and getting drunk and really bad things are happening,” Wiener said of Nosa Ria, for which he persuaded fellow Sups. Eric Mar and Norman Yee to vote to remove the video surveillance condition before approving the application.

That condition stated: “The petitioner shall utilize electronic surveillance and recording equipment that is able to view the outside of the premises, including all entrances and exits, and that is actively monitored and recorded. The electronic surveillance shall be utilized during operating hours. Said electronic recording shall be kept at least 30 days and shall be made available to the Department or Police Department upon demand.”

Mar said he agreed with Wiener that “a broad discussion of electronic surveillance requirements would be important for this committee,” but Mar then voted against removing that condition from the Cesar’s Ballroom application, saying, “I think we need surveillance in certain spots on a case-by-case basis, and I think this is an area that needs surveillance.”

When SFPD first sought new video surveillance tools — back in 2005, when the department asked for 71 video cameras at high-crime intersections around the city — it was rigorously debated in public hearings for months. And when they were finally approved by the Board of Supervisors, they included an extensive set of controls on when SFPD could request footage — the department wasn’t even allowed to control the cameras directly — how it could be used and when it must be erased.

The legislation also required a follow-up study of their effectiveness in deterring and prosecuting crimes. Conducted by the University of California’s Center for Information Technology Research in the Interest of Society (CITRIS) in 2008, the report found the cameras had no impact on violent crime rates but a small deterrent impact on property crimes in the filmed areas.

As a tool for prosecuting crimes after the fact, “There has been limited success with the cameras acting as a ‘silent witness,’ with footage standing in for witness testimony; some anecdotal evidence suggests that the existence of CSC program footage can actually deter witnesses from cooperating under the assumption that the cameras have caught all necessary evidence,” the report said, also noting that twice in the 120 police requests made by 2008, footage resulted in charges being dropped or downgraded.

But today, SFPD apparently believes that times have changed, and that the rigorous oversight and evaluation of video surveillance tactics and their implications on people’s privacy rights — or even the need to notify the public that SFPD is seeking new ways to watch citizens — are no longer necessary.

“Over the last few years, we’ve increased the number of recommendations for video surveillance, for a few reasons,” SFPD spokesperson Gordon Shyy told the Guardian, citing how cheap and ubiquitous the technology has become and the role that video footage can play in solving crimes.

Yet attorney Michael Rischer with the ACLU of Northern California, who actively opposed the SFPD’s proposal in 2011 and was dismayed to hear the department secretly and unilaterally expanded its video surveillance reach after its proposal was rejected, said that reasoning is exactly why there are legal controls on the expanding police state.

“Both of those justifications are exceedingly troubling and they demonstrate why the San Francisco Police Department should not be doing this in some room sealed off from the public,” Rischer said. “The police have this totally backward. The ease and cost of doing this is a reason why these protections are in place.”

Unlike under federal law, Californians have an explicit constitutional privacy guarantee and a body of case law defining that right in great detail. But the SFPD doesn’t seem to be aware of the nuances of that case law, such as the distinction it makes between people’s expectation of privacy on public streets versus in private businesses.

“When you enter a bar or restaurant, you don’t have an expectation of privacy,” Shyy told us.

But Rischer said that just isn’t true under the law. He noted that people do indeed have a reasonable expectation that they can enter a gay bar without being outed, for example, or that police won’t be able to demand video from a gathering in a bar where subversive political ideas are being discussed. And those concerns are exacerbated by SFPD’s policy that bar owners must simply turn over footage “upon demand.”

“The notion that the government is requiring a business to conduct surveillance of its patrons and to turn it over to the Police Department without any judicial oversight or even rules is deeply troubling and probably unconstitutional,” Rischer said.

Shyy said SFPD will “only request them when a crime has been committed,” but he also admitted that the conditions it is requesting on liquor licenses don’t set that limit and the policy hasn’t been reviewed by the Police Commission or other local oversight bodies.

ABC spokesperson John Carr told us his department doesn’t have a position on video surveillance and hasn’t tracked whether other jurisdictions are seeking the condition. As for whether it routinely includes SFPD’s recommended conditions, he said, “ABC reviews each application on a case by case basis.”

There are indications that SFPD sometimes resorts to bullying bar owners into turning over video surveillance without legal authority to do so. Jamie Zawinski with DNA Lounge last month blogged about Officer Simon Chan telling the club that it was required to keep video footage and turn it over upon request, which club operators informed the SFPD wasn’t true. “It’s just another sneaky, backdoor regulation that ABC and SFPD have been foisting on everyone without any kind of judicial oversight, in flagrant violation of the Fourth Amendment,” Zawinski wrote.

Regarding that incident, Shyy would only confirm that most bars aren’t yet required to keep and turn over video footage. And he said SFPD will cooperate with the hearing Campos and Wiener have called. “At this point, we don’t believe we’re violating people’s constitutional rights, but we’re willing to have that discussion,” Shyy said.

Wiener said that on April 3, he discussed the issue with Police Chief Greg Suhr, who indicated a willingness to cooperate with public hearings on the policy. But Wiener said he’s bothered by the fact that SFPD seems to have put this new policy in place right after being unsuccessful in doing this through a public process in 2011.