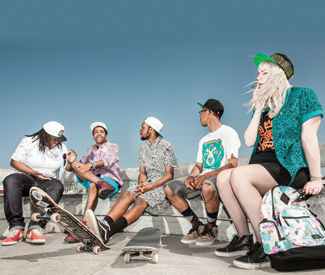 STREET SEEN What’s in a lookbook? When you’re a styling collective that works with one-of-a-kind vintage items, the question is somewhat challenging. Only one person can buy each outfit in Retrofit Republic‘s newest “Tastemakers” style book, after all.

But co-founder Julia Rhee explains to me in an email that her brand is about way more than call-and-response trend manufacturing. “We could’ve exclusively sourced from the big box stores when we started our business,” she writes. “But we wanted to show clients that we don’t have to live in a throwaway culture that constantly churns out fast fashion with no regard to the environment.”

Rhee and co-founder Jenny Ton counsel clients who make appointments at their private showroom for styling tips that unique pieces that don’t quite fit can be adjusted. “When in doubt, roll it, cuff it, belt it,” she says.

Given the preponderance of grown-and-sexy types at the release party for their newest lookbook on April 13 at the SoMa-sleek Tank18 tasting room, it would seem that SF (a town whose picked-over thrift stores should tip you off on our luv for secondhand) is down for the Retrofit message.

Or maybe there’s another message the party people were responding to. Because instead of populating their campaigns with traditional models, Retrofit is known for making mannequins out of the Bay’s social changers. “Tastemakers” features food justice activist-sustainable chef Bryant Terry, feminist tech networker Angie Chang, founder of genderqueer youth leadership advocates Brown Boi Project B. Cole. Past books have included Supervisors Jane Kim and David Chiu.

“As people of color, we’re not often given the space to be positively highlighted and affirmed that we are beautiful,” Ton writes. “So instead of waiting for that space and change to happen, we decided to take it into own hands, on our terms, to be the change we want to see in fashion and in this world.”

Are we really becoming the outer borough to Silicon Valley’s Manhattan? The fact that Мишка, a Greenpoint brand, is opening up its first store in the city next to a tattoo shop on 25th Street in the Mission is one sign that: yep, maybe. Or maybe it says more about how the Internet is globalizing hipster culture — the brand already has stores in Tokyo and Los Angeles.

Мишка is the kind of low brow movie-inspired streetwear brand (read: many hats and t-shirts) that inspires hordes of young enthusiasts so gung ho that the brand’s national marketing coordinator Leigh Barton tells me, her bloodshot eyeball-adorned fingernails lightly gripping a cappuccino cup in a Haight Street coffee shop a few blocks from where she was hosting last week’s warehouse sale, kids will show up to stores ready to work for free, just for good vibes and freebies to further their sartorial addiction.

The company already has a passionate Bay Area fan base, and co-founder Mikhail Bortnik tells me in an email the feeling is mutual. “The art, music, and culture that has been oozing out of the city for decades has influenced our brand and art greatly,” he writes.

SF store manager Chris Brennan actually shot a lookbook last summer featuring the Bay’s new crop of hip-hop heartthrobs: Chippy Nonstop, Antwon, and Trill Team 6 were among the models — which makes sense given that Мишка’s a hybrid project — Bortnik and co-founder Greg Rivera also run Мишка Records, which recently released Cakes Da Killa’s rad sophomore effort The Eulogy and had its hand in Das Racist’s early mixtape glory as well. Keep an eye out to see how the company will be contributing to the ongoing rhythms and melodies here in the Bay.