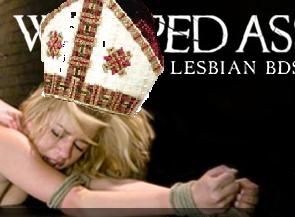 Yes, for while Love Actually came in at #6, a scene featuring Lea Lexis and Krissy Lynn on “lezdom bondage” Kink site Whipped Ass followed close behind at #8, and #13 was occupied by Tiffany Starr and Sheena Shaw on the TS Pussyhunters site.

We’re putting out the feelers to Kink to see how news of their influence in — and being robbed of revenue by — the world’s most flamboyantly attired country is being recieved by the company, stand by for post updates.

UPDATE: Acworth has released a statement that implies the Vatican will espace legal action from the website:

Read Acworth’s full statement here, featuring more Kink-Church comparisons like, “what is subspace if not a way to exorcise demons?”