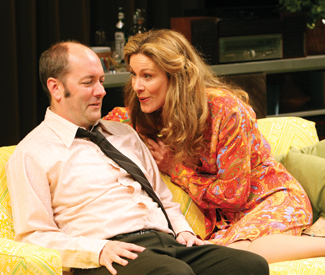 THEATER “Oh, this stupid war. I don’t know who to blame anymore, do you?”

So asks aging American divorcée Mary-Ellen (Marcia Pizzo), in 1975 Southern California, of Vietnamese war refugee Bao (Jomar Tagatac), who has lost his entire family back home. It’s a fraught question that, maybe fittingly, receives no answer. But it’s made all the more complicated and troubling in the Magic Theatre production of Julie Marie Myatt’s 2009 comedy-drama, The Happy Ones.

That’s because Bao and Mary-Ellen’s precarious perches, at the edges of the so-called American Dream, do not get pride of place. The narrative center goes to Walter Wells (a sure Liam Craig), cheerful business owner and middle-class patriarch who suffers an irreparable loss after his adored wife and two children die in a head-on collision with a car — driven by Bao.

Of course, the causes of suffering, and the consequences of violence, are very different when comparing a road accident with a war of genocidal proportions. But in The Happy Ones the emphasis on grief as universal, the overweening urge to see everybody just get along, obscures reality, substituting easy humor and sentimentality for a serious look at either systemic violence or, for that matter, the nature of happiness. No wonder Mary-Ellen doesn’t know who to blame.

Helmed by California Shakespeare Theater’s Jonathan Moscone, the production stresses the play’s emotional comedy about sorrow, forgiveness, shared pain, and the power of friendship, offering able performances and well-shaped scenes that smoothly unfold a palatable nostalgia trip whose sentiments are rooted in a claim to a certain class-based suburban memory.

Erik Flatmo’s set is a shabby period living room in a white Orange County suburb, complete with a blown-up studio portrait-photo of the happy family hanging over the fireplace with its untouched Duraflame logs. Martinis, audible splashing from a backyard pool, Sundays at the Unitarian Church, hickeys, tuna casseroles with crumpled potato chips on top — it’s the Kodachrome image of the American 1970s as advertising agencies would have us remember it.

Myatt has worked the terrain of war, home front trauma, uneasy solidarity, and vague spiritualism before to more profound effect. Her earlier play, Welcome Home, Jenny Sutter (produced locally by TheatreFIRST in 2011) dealt head-on with the Iraq War and the plight of its American veterans with its titular character, a black female soldier deeply traumatized by her experience on the front lines who finds some respite among a community of misfits on the desert-edge outside Los Angeles. It’s a perhaps looser but also more acute investigation that wrestles with class, gender, and race in a more vigorous way. The distance offered by the nostalgic period setting in The Happy Ones, by contrast, seems to have made it too easy to hold all of that at arm’s length.

“Things change,” the grief-stricken Walter propounds to his concerned friend Gary (Gabriel Marin), a hapless and commitment-phobic Unitarian minister now dating Mary-Ellen who seems to have been in love with pal Walter’s wife and life. Yes and no, the play suggests — somewhat unwittingly — as we’re left at the launch of a buddy movie instead of on the brink of the world we’ve in fact inherited.

Bao turns out to be the only one who can help Walter navigate his grief. As Gary and Mary-Ellen make awkward attempts to cheer up their friend, it’s Bao who actually helps — taking the place of Walter’s late wife as the person who cleans, cooks, buys groceries, keeps house. Having tried to kill himself just after the accident, Bao now literally begs to serve Walter, in terms that imply a kind of living erasure that has a very gendered dimension to it in the patriarchal culture of the ’70s.

“You can’t repay me for killing my family,” objects Walter. “It doesn’t work like that.” Reparations, of whatever kind, seem to be running in the wrong direction here. Would this relationship remain as conceivable as it supposedly is here if Bao were an Iraqi refugee in 2013? If the playwright means for the lines to appall us, as they should, the production seems indifferent to this subtext.

So Mary-Ellen’s rhetorical question about the responsibility for the war lingers between two relative outsiders who, with a combination of pity and desire, orbit around a central character whose social position is the normative one — with real-world power and privilege that neither Bao nor Mary-Ellen can match, and the one most directly associated by reason of class, gender, and race with the interests promulgating war abroad.

This should be the basis of a painful awakening in the audience, a scathing critique of the solipsism of power. But it ends up seeming more like the re-inscribing of the same order. The racism, imperialism, and sexism shaping the lives of Bao and Mary-Ellen are gently broached at best, trivialized at worst. Walter’s grief and personal transformation remain paramount. And if Bao and Mary-Ellen seem to have gained some hopeful ground by the end too, it is only because each has, desperately but also willingly, hitched his or her future to a white man. *