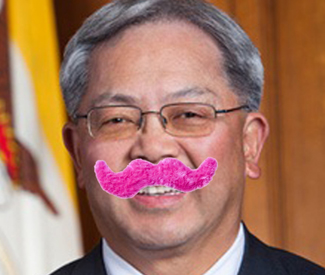 Hansu Kim has been involved in the San Francisco taxi industry for more than a decade. He helped design the current system of buying and selling cab permits, or medallions. In 2011, he led a group that bought DeSoto Cab, and now he runs what many say is the best-managed livery company in the city. Taxis are his career — and he’s about ready to pull the plug.

“You can quote me on this, because I’m very serious,” Kim told us. “If the city can’t solve this problem, DeSoto will drop out of the taxi business. We’ll run limos or something else. Because the whole industry is headed for collapse.”

The problem Kim is talking about: The rise of companies that act like cabs, offering rides for hire, but operate outside of the rules and regulations that the traditional industry is mandated to follow.

They’re called Lyft, Sidecar, Uber, and Tickengo, and they offer the same basic model: You can track a ride on your phone based on geolocation, the driver can choose whether to pick you up — and you pay a fee that the companies call voluntary but everyone knows is the basis of a venture-capital-funded business model.

They refuse to accept the city’s oversight, running without the medallions that traditional cabs need to pick up passengers.

Cab regulators are furious: “Those of us who know the situation know there’s a reason that taxis have been regulated for 350 years,” Chris Hayashi, who runs the taxis division of the city’s Municipal Transportation Agency, told us. “If you follow this to its logical conclusion, it will kill the entire industry.”

That’s a problem for a number of reasons — for one thing, Hayashi said, “you’re not going to find one of these new services picking up a disabled grandmother at the hospital and taking her home to the housing projects.”

But there’s another element that policy-makers need to consider: By allowing the faux cabs to operate, the city is risking the loss of some $300 million in projected revenue, money that is supposed to underwrite Muni and public transit.

Hundreds of drivers who bought medallions with long-term loans may wind up underwater — and the local credit union that financed them could lose millions.

Two years ago, San Francisco radically changed the way it distributes taxi medallions. Since 1978, the valuable permits were given out essentially free to working drivers, on the basis of a waiting list that could be as long as 15 years.

Now, they’re sold at a fixed rate; any active driver can buy one, and every time one is bought or sold, the city gets a substantial cut.

Some 300 have already been sold, with most of the drivers taking out a special loan from San Francisco Federal Credit Union. It’s a good deal — a permit holder can count on not only the money from driving but another $2,500 or so a month from renting the medallion out for shifts when he or she isn’t in the car.

But competition from Lyft and the others has already eroded the value of the medallions. “Absolutely, it’s happening,” Hayashi said. “We’re asking the commission to lower the price to $250,000 to reflect that.”

And they may have to lower it more — a lot more — in the future.

Everybody agrees the city’s taxi industry is a mess — customers constantly complain that they can’t find cabs, particularly at busy times. And the new tech-driven alternatives have sprung up to provide competition.

But from the perspective of a driver, it’s already almost impossible to make a good living. “We’re still okay, but a lot of people aren’t” Kim said. Paying off a medallion loan, leasing or buying a car, and paying for gas leaves so little left over at the end of many shifts that some of the most experienced drivers are thinking of leaving.

The result, Hayashi argues, will be a race to the bottom, with less-qualified and less-experienced drivers hustling ever harder for a fare — which means more accidents as desperate cabbies speed around town, running lights and cutting corners. It’s also bad for the tourism industry — inexperienced drivers aren’t good for the city’s reputation.

In the end, Carl Macmurdo, the head of the Medallion Holders Association, told me, “We’re looking at the total deregulation of the industry.”

That may be fine for some people — particularly those who are young, able-bodied, and tech savvy. But it’s not so good for the rest of the city.

Regulated cab drivers not only have to undergo a background check and training, they’re under a legal mandate to pick up everyone — or any age or ethnic group. They can’t turn down a fare because the person wants to go to a part of town they don’t like. They can’t legally discriminate.

The newcomers have no such rules.

“I took Lyft twice,” Hayashi said. “My customer profile on the system is now so low that I can never get another ride. I’m told I must have said something the drivers didn’t like.

“Traditional cabs have to pick up everyone. Unless you’re on Facebook, have a valid credit card, and are hip and cool to your driver, you can’t get picked up. That’s just not a good system for a diverse city.”

There are plenty of other issues: The new outfits don’t have the same level of insurance that traditional cabs require. “And you have to remember, it’s like your mother said — don’t get in a car with a stranger,” Hayashi added. “When you have no idea who these drivers are and they haven’t been screened properly … it’s scary.”

So far, Hayashi’s efforts to crack down on the rogue cabs have not won her much support from City Hall. The mayor is a big fan of the new model, and few supervisors have stepped forward to demand accountability.

They aren’t considering that taxis are more than just a business — they’re part of a civic transportation infrastructure. But those city officials with stars in their eyes about the latest disruptive technology might also want to look at the cold, hard numbers. By allowing the traditional industry to collapse, they will be allowing an immensely valuable public asset — those medallions — to become worthless, and will be forcing taxpayers to find another $300 million to make up the difference.