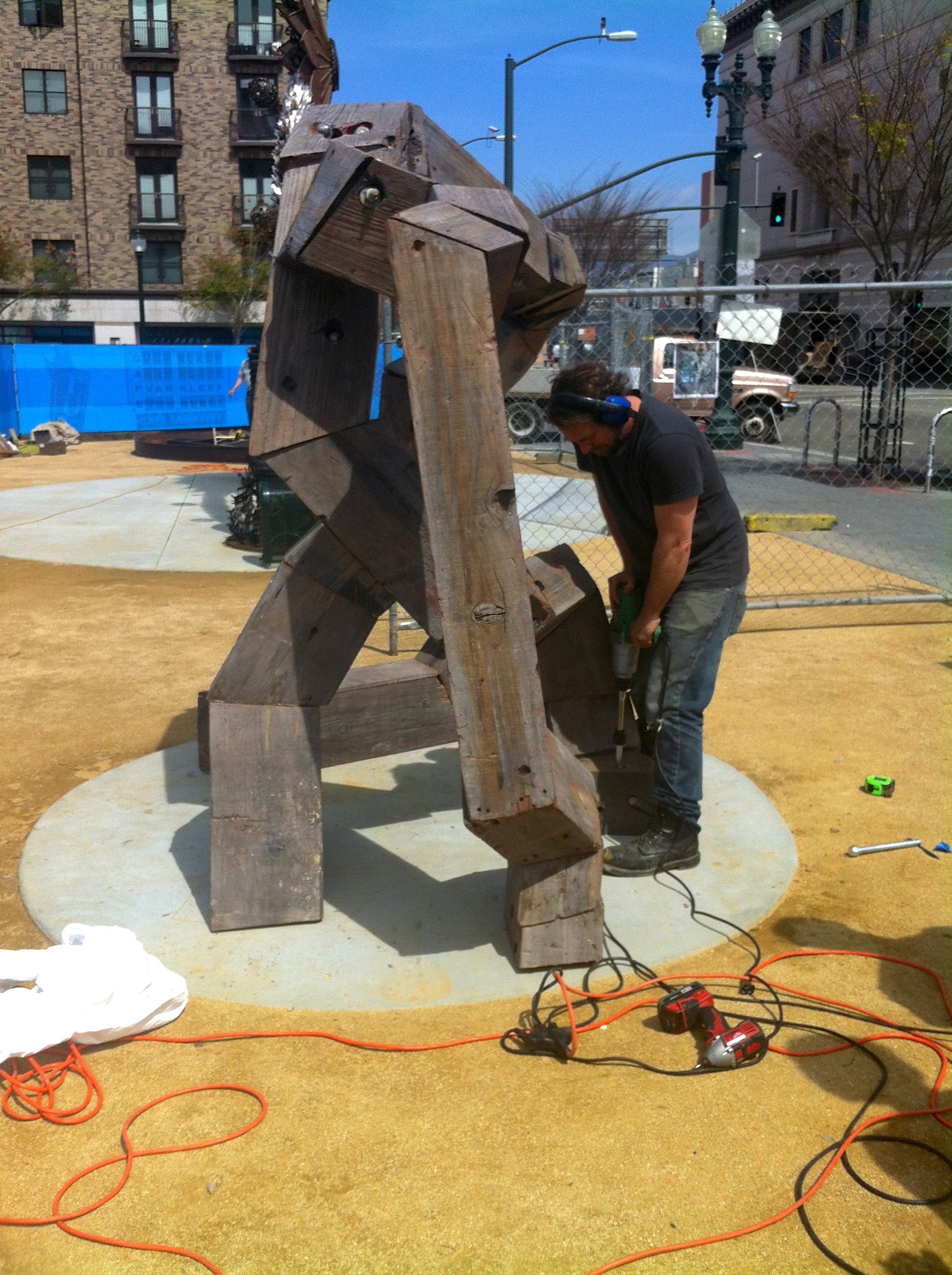 Last Tuesday, in the parcel of land off of Telegraph Avenue between 19th and 20th Streets in Oakland, Randy Colosky discussed the orientation of his wooden sculpture, The Pressure to Hold Together That Which Held Things Back Part 2. Three assistants and two arts commissioners weighed in. The word of the hour, it seemed, was “dialogue.”

“It’s about starting a dialogue,” Steven Huss, the city’s Cultural Arts Manager, said on the phone earlier that day. He reiterated the same on site as he moved a portable chain-link fence aside to enter the Uptown ArtPark, a large-scale temporary sculpture garden that will open to the public tonight during Art Murmur. His favorite part of the park’s construction, he told me, was talking to people who stopped to ask questions.

Huss is experienced in the art of dialogue. Over the past three years, he has witnessed and participated in the many that have transpired between the community, the city, and developers during the planning of the space’s use.

As a part of a redevelopment effort to enliven Oakland’s uptown area, the city bought the parcel in 2005 and began to lay out plans for an apartment complex and Henry J. Kaiser Memorial Park, which now hosts the monument, Remember Them: Champions for Humanity, which honors a wide array of humanitarians such as Frederick Douglass, Elie Wiesel, and Harvey Milk. The piece of land adjacent to Telegraph, known as Parcel 4, was slated to become a parking lot, but members of the community objected.

After an blogging effort, an exhaustive campaign at city council, and a plan that aligned with an initiative to promote public art in Oakland, a proposal began to crystallize in the summer of 2009. In October 2010, after searching for funding, Huss earned a Creative Placemaking grant from the National Endowment for the Arts, which the city agreed to match. Other sponsors stepped in, including Burning Man offshoot Black Rock Arts Foundation, which was eager to exhibit work in an urban setting.

On the phone and in the park, though, Huss’s tone flattened as he discussed the years of bureaucratic coordination and lightened as he talked about the art and the space that had almost reached completion. For the time-being, the logistics had been settled and he was relieved and excited that he could look forward to filling the space. In the empty back-alley of the three-sided lot perimeter that comprises the ArtPark, Huss enthusiastically described the potential dance and theater events that could enliven the space. In what he called “immersive theater,” the audience would participate in the production.

Programming will focus on “dialogue, not didacticism,” added Kristen Zaremba, Senior Public Art Manager for Oakland, as Huss went to talk through the fence to a passerby who had shouted a question about how long the project had been underway.

As they talked, Zaremba spoke to a woman who was drilling into the concrete pad at the base of Karen Cusolito’s Dandelion, then pointed out the steel wool tufts that the artist recently added to compose the anther of the giant flower.

The 20-foot tall sculpture, the final in the row along 19th Street, complements the other nine works in the park in the play between the organic and the industrial that adheres to the exhibition’s theme, “repurposed.” In ascending height order from Telegraph back along 19th, the pieces form an oversized garden of welded steel, recycled bicycle parts, and in the case of Colosky’s second piece, Barbican, engineered ceramic honeycomb, a material found in the catalytic combustor of a car. The effect is both whimsical and striking.

When we returned to the plot along Telegraph, Colosky’s piece had assumed its arch-like form that he envisioned. Though a completed version of Pressure had already been exhibited before it came to the Art Park (all except one by Eric Powell were finished work), the artist enjoyed the process of revising the reclaimed redwood retaining wall pieces to fit the circular base. “In remaking things, you get to explore all the possibilities,” he said. He and his assistants agreed that the new configuration worked well, and they bolted it down then cheered. “That ain’t going nowhere,” Colosky proclaimed with a grin.

As the group sat down to lunch, a man on the sidewalk shouted, “Making our city look good! Welcome.”

On Friday, the chain-link fence will depart and the Uptown ArtPark will receive its official welcome in a ceremony that will include speeches by Mayor Jean Quan and city council members, an organized bike ride, and because above all, Huss wants to celebrate the artists of Oakland and the vibrant scene they have created, it will also include conversations with the artists, most of whom will be on site.

At a certain point, though, serious dialogue will end. “Friday will be fun,” Huss said. After years of planning, Parcel 4 will open as a community gathering place. “It’s a party.”