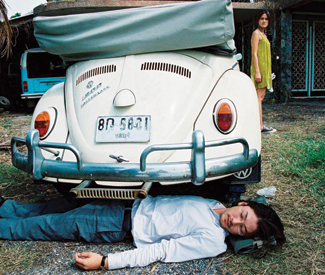 FILM Thai filmmaker Pen-ek Ratanaruang’s international breakthrough, Last Life in the Universe, came out 10 years ago, but its themes of isolation and loneliness still feel very much of the moment. Eternally cool Japanese star Tadanobu Asano plays librarian Kenji, whose Better Off Dead-style existential turmoil leads him to attempt suicide, or at least think long and hard about it, multiple times. His morbid fantasies are varied: hanging (with a note, “This is bliss,” later repurposed by his crass brother as scratch paper: “Gone jogging”); gunshot; bridge-jumping.

The latter brings him into contact with a pair of sisters, Nid and Noi (real-life siblings Laila and Sinitta Boonyasak); when Nid is suddenly killed in a car accident, Kenji and Noi form a cross-cultural attachment against the backdrop of the girls’ ramshackle Bangkok house — a riot of dirty dishes and slobbery that contrasts sharply with Kenji’s obsessively tidy apartment, though that space has been lately littered by two dead bodies, courtesy of some inconvenient yakuza-on-yakuza violence.

Working from a script by Thai writer Prabda Yoon, and benefiting from Christopher Doyle’s meticulous cinematography, Ratanaruang structures his film along a non-linear timeline, suggesting, as Doyle points out in Last Life‘s DVD commentary, the way the human mind jumps back and forth, mixing flashes of memories into perceptions of the present. It’s a film that will most benefit a viewer willing to pay close attention to its “implications, rather than explications, of ideas” (Doyle again), and certainly holds up under repeat viewings. Another added benefit of watching it again: appreciating the humor that Ratanaruang sneaks in on occasion, as when director Takashi Miike (whose Asano-starring 2001 Ichi the Killer is referenced early on), in a cameo as a gangster, tells a woman she has seaweed stuck in her teeth. (It’s all in the delivery.)

Director, writer, cinematographer, and star reunited in 2006 for the noirish Invisible Waves, which has its own moments of dark comedy, as Kyoji (Asano), a chef with underworld ties, murders his lover at the behest of her husband — his boss — before sailing on the world’s grimmest cruise ship from Macau to Phuket. Aboard, he meets a wistful single mother with the familiar name of Noi (Kang Hye-jung from 2003’s Oldboy); her baby’s named Nid. (Another connection to Last Life: a shady, karaoke-loving character who goes by Lizard, echoing a reptilian motif from that earlier film.)

Kyoji’s journey is complicated by his malfunctioning room, with its haywire shower head and temperamental front door. “I’m inside the room and I cannot get out,” the frustrated man explains over the phone to an unhelpful concierge. It’s clear long before he gets off the ship and begins fumbling around an unwelcoming Phuket, however, that the biggest trap Kyoji is caught in was set by his own dubious life choices. Not for nothing does someone dub him “the stupidest smart guy I ever met.”

Ratanaruang’s most recent film, 2011’s Headshot, makes its local debut as part of the Yerba Buena Center for the Arts’ “Thai Dreams: The Films of Pen-ek Ratanaruang.” Dubbed a “Buddhist neo-noir,” Headshot features a flashy poster and an even flashier tag line: “Bangkok’s most dangerous cop is about to have his world turned upside down.” This is meant literally; the film concerns cop-turned-assassin Tul (Nopporn Chaiyanam) who suffers an injury that inverts his eyesight. Thankfully, the film is shot right side up, for the most part — and in Ratanaruang’s hands, what could’ve been a cheap gimmick becomes an entry point into a surprisingly layered tale.

Ratanaruang will be at the YBCA in person — his first-ever visit to San Francisco — for screenings of Headshot (Thu/4) and 2009 ghost story Nymph (Sun/7), which both star Chaiyanam. The YBCA’s retrospective also includes Last Life and Invisible Waves, plus 2007’s Ploy, about an endangered marriage, and 1999’s loopy thriller 6ixtynin9.