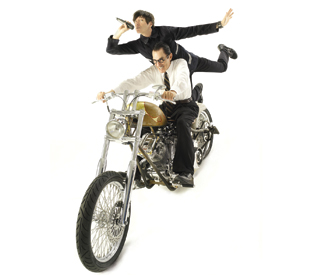 TOFU AND WHISKEY It’s the B-story scene that rules 1983’s Valley Girl. Popped collar-sporting Skip is nervously riding his bike to the suburban home of his preppy high school girlfriend, Suzi — but we the audience know he’s more interested in her young step-mom. (He met the feisty Valley mom when she served him sushi at a house party. Gross me out.) It’s a palpable moment of orgasmic anticipation — with a surprise twist — that bops along perfectly to the soundtrack: “Eaten By the Monster of Love,” by experimental pop duo, Sparks (www.allsparks.com).

“Well, it’s worse than war, it’s worse than death/There ain’t too many left who ain’t been/Eaten by the monster of love(Don’t let it get me),” Sparks vocalist Russell Mael opines with a wide-ranging, Broadway-ready bravado, as his brother Ron Mael tickles a bouncy new wave blast out of his keyboards and synthesizers.

This is just one iteration of Sparks — the flashy new wave version, proudly on display in ’82’s Angst in My Pants LP, two tracks of which were used in that early Nicolas Cage vehicle, Valley Girl. But that’s only a small snippet of the band’s robust timeline, which got a running start in ’71 at UCLA, and continues to this day, with 22 albums and counting.

Sparks has had countless rebirths since the first record was released in ’71, the band then known as Halfnelson. There have been landmark albums like ’74’s electric Kimono My House, with that iconic cover of two powdered and kimono-swathed ladies, along with ’83’s synth-heavy In Outer Space, ’02’s chamber pop Lil’ Beethoven, and most recently, ’09’s The Seduction of Ingmar Bergman, a radio musical commissioned by Sveriges Radio Radioteatern, the radio drama department of Sweden’s national radio broadcaster. (More on that later.)

“It seems like the people that stick with Sparks appreciate that the band doesn’t rest on its laurels,” says Russell, a lifelong Angeleno, speaking to me from his home “in the hills above Beverly Hills.”

“I think that’s why we’re really proud of what we’re doing now; it doesn’t sound like a band that’s necessary had 22 albums,” he says. “Someone can come in fresh — a person that’s maybe never heard of Sparks — and if they hear the latest thing, we would be just as happy as we would be for them to have heard the first album.”

Sparks will perform much of its extensive back catalog during its Two Hands, One Mouth (the hands on the keyboard, mouth at the mic) tour’s rare stop in San Francisco next week, April 9 and 10 at the Chapel, 777 Valencia, SF. www.thechapelsf.com. As of press time, only April 10 is sold out.

The brothers Mael have recorded with dozens of other musicians over the decades, and nearly always toured with a live backing band, so the Two Hands, One Mouth trip has been a unique challenge. “It’s kind of the ultimate expression of self-containment for the band,” Russell says. “We just thought that at this point, it might be an interesting challenge to see what would happen if we just played as the two of us, and without computers or backing tracks.”

He adds, as if reading my mind, “It sounds simple, but we also didn’t want it to read as oh, singer-songwriter, that kind of thing where it lulls you to sleep with an acoustic guitar. We wanted it to keep the power that Sparks has had with the recordings and live band.”

The process has been about choosing the appropriate songs from the duo’s rich recording history, and distilling it with just one keyboard, and vocals. So far, the tour’s been well-received in Europe and Japan, with fans commenting on how this format has brought the strong vocals and songwriting to the forefront.

And the Maels work hard to layer those lyrics with humor, depth, and a drop of speculation. “It’s important to us to have something that’s provocative, but in ways that maybe aren’t like, being a punk band with a stance that you know what it is in five minutes. The Sparks stance is a little bit hard to articulate and place. We kind of like that too, that there is an ambiguity to what we’re doing.”

Their most recent project is that The Seduction of Ingmar Bergman piece. The plot of the radio drama is a farcical situation imagining that Ingmar Bergman had been lured to Hollywood and got trapped in the LA film industry in his worst nightmare — a big-budget action film he can’t figure out how to escape. The Swedish radio spot went so well that Sparks was asked to perform it live at the LA Film Festival last year, where they did so with a cast of 14.

The brothers are currently working on turning it into an ongoing theatrical performance — and also a motion picture. They have the Canadian director Guy Madden on board to direct, but still need the financial backing, so they’ll be flying out to the Cannes Film Festival in May to look for funders.

But before Cannes, Sparks will first play the massive sweaty shitshow that is Coachella for the first time. And yes, they will do it as a stripped-down duo — still just Two Hands, One Mouth.

“We know the show works in our own context, so we thought we should be faithful to ourselves and do it there as well, even if it seems incongruous with what you might expect at a big festival,” Russell says. Do I detect a tiny smirk through the phone? Perhaps wishful thinking on my end.

“It’ll be received however it will be received — [but] it will be different from other things there,” he says. “You tend to get blinded by an assault of 160 indie bands doing their indie thing. We’ll be doing whatever we do, whatever you want to call it.”

ESBEN AND THE WITCH

With swelling crescendos, emotional lyrics, gothy undertones, and shimmering vocals in tow, UK post-rock trio Esben and the Witch comes across the pond for the first time in two years, on tour with newest record, Wash The Sins Not Only The Face (Matador). Should be a witchy one. With Heliotropes.

Lyrically gifted young Oakland rapper Glam.I.Rock — the first half an acronym for “Good Lyrics And Music” — will perform a free in-store during Art Murmur this Friday. If you want to be in on an artist at the tipping point, this would be your chance. The MC has that classic ’90s female-empowerment hip-hop vibe but with some different interests (check the “Who is Glam.I.Rock?” video of her tapping out the Rugrats theme), and a more modern style.

Though like her predecessors, she still very much reps her home-base, performing “Inspire Oakland” at Oakland Digital’s Inspiration Awards last December. Makes sense, she’s the daughter of Nic Nac — the only female member of the Mobb crew — and Dangerous Dame, a member of Too $hort’s Dangerous Crew. Glam.I.Rock’s debut EP, The Feel, recently dropped on Savvie1ent/The Olive Street Agency.