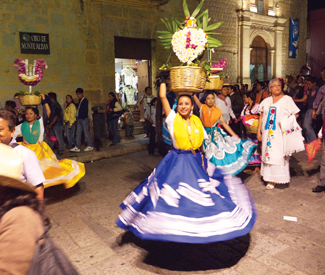 WORLD EATS The first thing you probably need to know about the magical Southern Mexican state of Oaxaca is that sensory overload is always on the menu.

Ancient sci-fi Zapotecan ruins, Technicolor one-story colonial buildings, and an endless stream of live music, whirling dance, outspoken political protest, and eye-popping art justify the eponymous capital city’s reputation as one of the most vibrant crucibles of human culture on the planet. (Seriously, there is live music and dancing, from traditional to punk, outdoors in multiple venues until 3am most nights. San Francisco, where you at?)

The soaring mountains of the countryside host innumerable villages, each with their own dazzling take on local customs and artistic expression. The beaches, like renowned global hippie-nudist beauty Zipolite, expand expectations by drawing a saucy mix of laidback locals, hard-partying city folk, and misfit spiritual wanderers from around the world who greet the golden waves with fire-twirling at sunset and impossible-looking naked yoga at dawn. And for any travelers worried that this land of UNESCO World Heritage Sites has been completely sanitized for first-world tourists, there’s plenty of everyday chaotic Mexican street life and colorful off-the-map adventures in which to satisfactorily immerse oneself.

But all that’s not even talking about the food. Any foodie explorer worth her rock salt knows that Oaxaca is the “land of the seven moles” — rich, fragrant sauces, traditionally poured over roasted turkey, made from a range of pulverized ingredients including chili peppers, chocolate, nuts, cloves, dried fruit, and tomatillos. (A great SF introduction to mole can still sometimes be found at the Mission’s La Oaxaqueña, which has unfortunately been seesawing lately between being one of the city’s best restaurants and a bacon-wrapped hot dog stand on random nights.)

But in an area where dozens of indigenous languages are still spoken and villages are separated by vertiginous, day-long hikes through spruce cloud forests dripping with blooming epiphytes and eerie Spanish moss — by all means take a couple days out of your stay for a eco hike with Expediciones Sierra Norte to blow your nature-loving mind — innovation and improvisation is a way of life. Hunky Beau and I hopped down there for a far-too-affordable March getaway, and here’s what we dug our forks into.

Mole gets all the press, but the backbone of Oaxacan street cuisine is the piping hot tlayuda, a very large grilled tortilla loaded with with bean sauce, guacamole, fresh and stringy Oaxacan cheese, and a hunk of grilled meat or scoop of zesty tinga de pollo stew that’s either served open-faced like a pizza or folded over like a crepe. The best ones we found in the city were at a pair of carts on Calle las Casas, conveniently located just down the street from the historic La Casa del Mezcal, opened in 1935. Ensconced in the Casa’s low light, you can slow-sip several kinds of maguey-derived liquor among baroquely carved wood fixtures, kitschy paintings of Zapotec warrior gods, and a motley assortment of fascinating locals. The mezcal flows until 3am, and the roughly $2.50 tlayudas even later, so you’re set for a good night out.

Or snatch a tlayuda for a perfect cheap dinner, paired with a steamy, meaty bowl of pozole from the carts down the block. (Fun fact: pozole is descended from the stew Zapotecs used to make of leftover human sacrifice parts. Now it’s mostly pork and corn.) Cheap breakfastwise, we were blown away by the scrumptious, hefty $2 morning chorizo- and omelet-filled tacquitos toasted on hot rocks by charming women on Calle García Vigil, near the Mercado 20 de Noviembre main market. Self-serve bakery Pan Bamby across from the huge, ever-bustling central zócalo serves a dizzying array of perfectly flaky empanadas for about 30 cents each, including several rare veggie options like creamed spinach and spiced vegetables. And, as always, the market is the best place to acquaint yourself cheaply with the local cuisine: witness the overflowing seafood cocktails at Mariscos Panchos and delectably overloaded roasted pork soft tacos, five for $3, at Carnitas Patlan.

Fascinating traditional drinks served at outdoor cart Nieves Cholito el Tule in the Plazuela de Carmen Alta include tejate (a crazy-sweet maize and cacao Zapotecan drink with a plasticky foam on top), chilacayote (made from a succulent squash with edible seeds as chewy treats), and syrupy tuna, a.k.a. cactus fruit.

Mole, of course, also served as an entry into the more experimental cuisine of this tastebud paradise. When you can get a three-course meal for two with a bottle of surprisingly satisfying Mexican wine (Casa Madero of Parras de la Fuente is producing a quality chenin blanc, and Baja’s Cavas Valmar a perky grenache) for around $50, we went and splurged a little.

Intimate and colorful La Olla, near the imposing Santa Domingo church, is where you go for regional authenticity with flair. Wide, thin slices of beef tongue soaked in a mole verde of almonds, raisins, tomatillo, and cilantro; mole negro de fandango, a fantasy-fulfilling 25-ingredient mole negro over roasted chicken; and mole amarillo con pitiona, lively and yellow with corn masa, three kinds of peppers, and lemon verbena vanished from our table in a mad scramble of sauce-sopping tortillas.

La Biznaga is the hip joint, a “very slow regional food” operation named for a portly flowering cactus, its large courtyard decked out in vibrant Cuban hues, with towering chalkboards announcing the fascinating menu and a globe-hopping clientele lapping up pulque cocktails. (Mixing with milky, beer-like pulque, derived from the maguey plant, is super-trendy in Mexico right now, and should hit here any minute.) An appetizer of yerba santa-wrapped bricks of Oaxacan cheese drizzled with citrus liqueur-infused crema came off a lot lighter than it sounds. “El Necio,” a large hunk of flank steak stewed in a mole-like sauce of smoked chili, plums, and mezcal submerged us in flavor world several fathoms deep, while a mushroom and goat cheese-spiked coloradito lifted a fleshy fish fillet to the top of our list.

If you’re looking for a true gourmet Oaxacan experience, though, the gorgeous Mission-style Casa Oaxaca, with its upstairs dining patio overlooking the kaleidoscopic downtown street hustle, is where you’ll find some of the most forward-thinking menu items that still pack an authentic local punch. Salsa is mixed and ground to tasted tableside in traditional molcajete mortar. Start with the exquisite, crunchy jicama taquitos filled with fried grasshoppers, cuitlacoche (corn smut), and quesillo cheese. Then, as the candlelight and atmosphere take hold, move on to absurdly tender venison bathed in ethereal mole amarillo and juicy slices of duck breast covered in nutty, deep orange mole almendrado.

Finally, for desert, slip back out into the captivating streets and share the refreshing carrot-apple-pecan ice cream flavor Beso Oaxaqueño, as the hypnotic local marimba music known as son istmeño drifts from the zócalo.