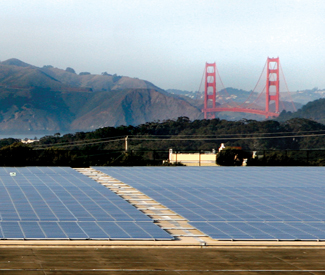 It was supposed to be part of Ed Harrington’s legacy, and the chief of the city’s Public Utilities Commission delayed his retirement to make sure it happened.

But six months after the Board of Supervisors voted 8-3 to move forward with CleanPowerSF, the plan is under attack from all sides. Pacific Gas & Electric Company’s house union is spending big chunks of money to shoot it down. The press is loaded with accounts of how expensive it’s going to be for customers. Advocates on the left are blasting it as too limited.

That’s left Sup. David Campos, City Hall’s chief proponent for CleanPowerSF, trying to move forward with a program that, for all its flaws, is the city’s best chance to put a crack in PG&E’s monopoly.

CleanPowerSF will offer San Franciscans a greener alternative to PG&E power, most of which comes from nonrenewable sources. The city will buy renewable power in bulk, through Shell Energy, and distribute it to customers along PG&E’s lines.

A similar system is working well in Marin County, and communities all over the state are looking to see if a city the size of San Francisco — where PG&E has kept out any hint of competition for a century — can pull it off.

Clean power is more expensive right now, and that’s one sticking point: City officials recognize that not all San Franciscans will be willing to pay a premium (of perhaps $10 to $20 a month) for the option. An SFPUC survey released March 25 showed that about 45 percent of the city’s customers would pay extra for clean power and stick with the new program. Earlier studies suggested that 90,000 customers will remain with CleanPowerSF — enough to make the system financially viable.

(Interestingly, the areas most likely to pay extra to avoid fossil fuels are not the wealthiest parts of town. Most of the customers would be on the Eastside, in communities like the Mission, Potrero Hill, the Haight, and Noe Valley.)

The bigger problem with the current debate is that advocates and city officials can’t agree how much money the city ought to spend, on what schedule, to build its own renewable generation system, which would eventually replace much of the power purchased by Shell.

“In the past we would have figures and claims from all sides, and Ed Harrington would look at the numbers and figure it all out, and everybody trusted him,” Campos said. “But we don’t have Ed any more, and Kelly doesn’t seem to be as strongly behind this.”

Building a green-power infrastructure was always a critical part of the CleanPowerSF plan. And once the city has a system up and running, it can use the revenue stream to float bonds to pay for building solar, wind, and cogeneration facilities.

Over time, the locally generated power would be far cheaper than what anyone can offer today, meaning rates would come down.

“We agreed to move the sales agreement forward to get the system started, then keep working on the build-out,” Campos explained.

But a campaign by International Brotherhood of Electrical Workers Local 1245, which represents PG&E employees and is historically allied with the company’s political goals, is trying to scare customers away with claims of high rates. And in fact, the first rate proposals were above what Campos and others were hoping for.

So the Local Agency Formation Commission, which oversees CleanPowerSF for the supervisors, and the SFPUC, have send staff back to try to find ways to cut rates.

Meanwhile, Kelly wants to de-couple the public build-out from the Shell agreement, in essence launching the program with the most expensive elements in place — and potentially undermining the future of a publicly owned energy infrastructure.

That has some clean-energy advocates furious — and they’ve threatened to withdraw their support for the program.

“Ever since Harlan Kelly took over, the PUC staff has been less supportive of a robust build-out,” Eric Brooks, who works with Our City has been a longtime supporter of CleanPowerSF, told us. “We’re not saying the city should stop moving forward with the Shell deal, but the city has to continue the planning work for the build-out. It can’t be a piecemeal thing.”

The SFPUC hired a Marin-based outfit called Local Power, led by longtime clean-energy advocate Paul Fenn, to do some preliminary work on how a build-out could proceed. Fenn’s conclusion: The city could create 1,500 to 3,000 jobs and build enough renewable energy to power much of the city, over a seven-year period — at a cost of about $1 billion.

That’s a huge tab — and almost certainly more ambitious than this SFPUC and Board of Supervisors could accept.

Fenn told us that his economic analysis, presented to the SFPUC’s Rate Fairness Board Feb. 18, indicates that the city’s cash flow from CleanPowerSF with a renewable build-out would more than cover the payments on the bonds. But he also agreed that he’s suggesting the best possible alternative — and he expects the city would go for a much smaller piece.

“The Board of Supervisors hasn’t made the decision to spend that kind of money,” he said.

Fenn’s contract expired April 1, and the SFPUC hasn’t renewed it. Instead, another consultant will review Local Power’s work, Campos said.

Part of the political challenge is that Local Power has proposed that much of the build-out include what’s known as “distributed generation” — small-scale solar, wind, and cogen projects on private houses and buildings.

Those installations would be “behind the meter” — that is, they would allow households and businesses to generate their own power without buying it through PG&E’s distribution system.

The build-out proposals that the SFPUC staff have discussed are primarily larger solar arrays, some on land the city owns in the East Bay.

“That’s the most expensive way to do this, and it allows PG&E to still control the transmission and distribution,” Brooks said.

Meanwhile, PG&E is preparing to roll out its own competing “green energy” plan — while IBEW ramps up it assault on CleanPowerSF.

The IBEW campaign includes robo-calls, mailers, and advertising, all aimed at convincing customers to opt out of the city program.

And now, with advocates from the Sierra Club to Our City criticizing the program on the left, and IBEW trying to undermine it before it gets going, there’s a real chance that a plan more than 10 years in the making could be in trouble.

That concerns Campos. “All I’m hearing from the advocates is negative,” he said. “I want more build-out, too, but unless we move forward with the program, we won’t be able to do that.”

In fact, he said, “you could wind up killing it and have nothing to show for it at all.”

That, of course, would be PG&E’s preferred alternative.