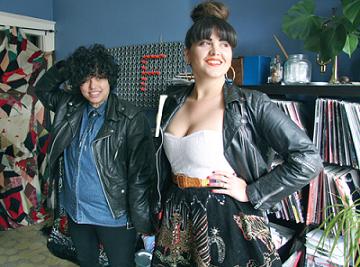 The 20-something duo behind the site and virtual gallery Konversation, Hawa Arsala and Tonia Beglari, parse trends like pros.

“We realized we could use our skills to help the people we actually care about,” says the Afghani American Arsala (Beglari’s family is from Iran), who is holed up with me in a FiDi cubicle showing off the photos of fresh female Bay style icons that I asked her to compile before Women’s History Month fades too far from pop culture consciousness.

Thanks to their vision of a strong, diverse Bay Area art-music-nightlife family, Arsala and Beglari are getting props on feminist media sites. Their idea to spread love for queers, people of color, and other faces underrepresented in mainstream media is in itself is nothing new, but what is fresh is the duo’s media savvy – they’re ready to take their social views into brave new binary code that packages radical artists in a fresh, viral-ready format. They spit tech knowledge, and use the apps that other culture workers will take years to learn.

What sparked their fire? Hat tip to the duo’s built-in bullshit meter, very essential when dealing with milieus in which “groupie” is the only recognized role for gorgeous women their age.

“The name Browntourage started as a joke to combat a really oppressive situation,” says Arsala. “A guy asked us to be part of his harem.”

Gross. But Arsala and Beglari’s hardcore eye for trend-spotting and Internet Age professionalism packs more pounds any deadweight. Future, anyone?