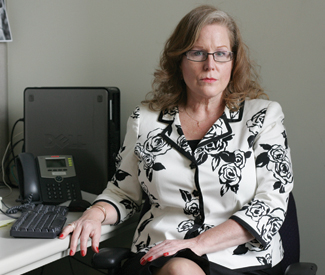 CAREERS AND ED All too often in the workplace, women fight to hide their sexuality. In Facebook chief operating officer Sheryl Sandberg’s Lean In, the controversial feminist-treatise-of-the-moment on combating sexism in the corporate world, Sandberg references a tech worker who goes so far as to remove her earrings before coming to work, so fervently does the employee wish to minimize her gender lest it distract her male cohorts.

Did her white board assertion consternate her coworkers? Tear rifts in officeland reality? Stonebanks says, to the contrary, it was a natural connection on her part that has led to increased office performance.

“The more domineering I became, the better the results,” she says, smiling. “If I could produce the numbers, they didn’t care about my tactics.”

Stonebanks, does, however, ken to Sandberg’s assertion in Lean In that women are expected to be likable in the workplace. In light of this, Stonebanks cites two different modes of operation: “credible,” a stern, enforcing office demeanor (“listen to me now, no you can’t check your Blackberry, repeat back to me what I just said,” she barks as an example of this) and “approachable,” a stance to be employed in times of negotiation.

But act credibly, and the hope is that people will see your gruff demeanor being to their benefit, if they’re working towards a common goal. “They’ll get that you’re not just a man or a woman,” Stonebanks says. “You’re a piece of the solution.”

This acronym is S.M.A.R.T. Its meaning: “specific, measurable, attainable, relevant, time-specific,” according to Stonebanks. In both the business and sex worlds, your scene will come off — and you’ll get off — much better if you establish certain parameters around the action. Once people know that what you’re proposing is doable, in various dimensions, they’ll be more open to coming to an agreement with you, or just coming.

Stonebanks tells me that though many of her clients are put off when she explicitly introduces S.M.A.R.T. into their office discussion, after time they themselves will point out when meetings veer from the S.M.A.R.T. principles. She’s even heard of the language persisting long after she’s left the room.

Another way to break down defenses, and pave the way to successful communication at work, is to let the person know what you find attractive about them. Stonebanks doesn’t shy from the fact that, at times, this means physical appearance. But when a person isn’t hot to you, that doesn’t mean you can’t get them to know that they’re appreciated. Compliment a recalcitrant coworker’s smarts, or their irreplacability on the project in which you’re working.

“When your sex hormones are activated, your defense mechanisms are not — and that’s what you need for sales,” says Stonebanks.

This last point may give pause to the HR directors among us. But Stonebanks says that she doesn’t interject overt sexuality into her business dealings — like her skirt, she keeps it family-friendly at the office. Her message is essentially the same for both men and women, although it should come as no surprise, given her background, she has a special place in her heart for a woman who can take charge.

“In every instance, when women are leading the company, profits go up,” she says. [Note: so far as I can tell, scientific conclusions on this point are inconclusive.]

If you’re not into the domineering type, she’s not offended. But don’t waste her time.

“I know what works. If you don’t want to hire me, next client.”