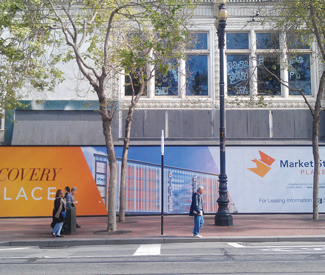 On a sunny Thursday afternoon, the sound of whirring power tools floats down to Market and Golden Gate as office renovations surge ahead in the building next to the Warfield, which looks as if it had been shrink-wrapped in white plastic to control the dust. Before long, several tech startups and a venture capital firm will occupy three floors there.

The newcomers will be following a trend: Twitter and Zendesk, beneficiaries of a payroll-tax exclusion zone created to attract growing businesses, already have offices nearby. Further down the street, a glossy sidewalk-level billboard walls off a stretch of empty storefronts. “This is the Place,” the message proclaims. “250,000 square feet of retail space, opening 2015.”

San Francisco’s Mid-Market neighborhood is changing fast. But this growth comes at a cost. It’s driving up rents for nonprofits and small businesses — and it may scuttle the long-promised ambitious plans to create an arts center with affordable space for small performance groups at 950 Market Street.

Mayor Ed Lee, who pushed for the tax breaks and lauds the changes in mid-Market, also wants the arts center, and has asked potential developers who are bidding on the site to consider that use. But it’s not the most profitable use — that would be tech offices — and there’s nothing mandating that a private company comply with the wishes of the mayor, at a potential loss of millions of dollars.

Instead, the city is discussing a possible incentive package — that is, special zoning or city financing schemes to help get developers interested in the project.

Mid-Market is still home to many people who are not bent on achieving tech millionaire status. Some are merely focused on finding their next meal, and might even dig through the trash for it. There are wheelchair-bound veterans, drug addicts, street merchants, and people living with AIDS. There are artists, actors, small business owners, serious sidewalk chess players, SRO dwellers, and nonprofit service providers. An economic development study determined that a full 31 percent of the households in the densely populated area earn less than $15,000 a year, making the neighborhood three times as poor as the citywide average.

The city’s been trying for years to formulate a strategy for the economically and racially diverse, centralized, transit-connected neighborhood, which is just a stone’s throw from City Hall. In recent years, community stakeholder meetings have been convened, email lists fired up, neighborhood surveys commissioned, pedestrian habits tracked, official reports generated. In November 2011, the Mayor’s Office of Economic and Workforce Development unveiled its Central Market Economic Strategy, which charted a course for the Market area stretch roughly bracketed by Fifth and Tenth streets.

The report opens with a set of “guiding principles” that residents said ought to inform any future revitalization efforts. Priority No. 1: “Promote the development of a healthy, economically functional low-income neighborhood.” Priority No. 2: “Prevent displacement of existing residents and businesses.”

A great deal of emphasis has also been placed on bolstering the area’s art scene, and the report acknowledges that efforts should be taken to “stabilize” low-income communities so they aren’t forced out through gentrification catalyzed by art. The strategy “also includes an action item for the creation of artist housing,” Christine Falvey, Mayor Lee’s press secretary, told us, but “community feedback on the strategy directed the city to prioritize non-housing arts space in the first year of implementation.”

The goals expressed in OEWD’s report hint at some of San Francisco’s most pressing issues — homeless families unable to sustain high housing costs are increasingly flocking to overwhelmed service providers in San Francisco; nonprofits are vanishing in the face of impossibly overpriced rents; artists are moving to Oakland.

And the fate of 950 Market could be a pivotal moment when the city learns if it’s actually possible to bring high-end economic development to the area without displacement.

The 950 Center for Art and Education represents a multi-layered community planning effort many months in the making. Described as “the first multi-tenant, multi-use arts and education center in San Francisco,” it came out of a desire to create a permanently affordable complex to house existing art, education and nonprofit organizations in Central Market and the Tenderloin, many of which are finding it harder to remain in San Francisco. In addition to dedicated arts facilities, the complex could provide 20,000 square feet of nonprofit office space.

“The mayor has been very clear with the development community that he thinks arts and cultural facilities are a good fit for this site,” Falvey noted. “He communicated this point at a breakfast meeting which he convened along with Supervisor Kim, to developers on Central Market and those looking at property in the area.”

Invitations to the breakfast, held Jan. 30, were extended to all interested bidders, as well as area developers. City officials treated the real-estate heavyweights to a power point presentation about local arts organizations, and representatives from a couple prominent foundations were on hand to show philanthropic support for the concept.

IT’S UP TO TEXAS

Lone Star, a Texas-based hedge fund, is selling the complex that would house the center, and was expected to receive final bids earlier this month. Sup. Jane Kim, whose District 6 includes mid-Market, said she was hopeful that the developer would go along with the vision for an arts space — but at this point, that’s not the city’s decision.

After all, city officials haven’t established binding requirements to use the space in a particular way, and turning it into commercial office space or market-rate housing would be far more lucrative. Lone Star declined to comment for this story.

Kim stressed that there are other shuttered properties in the area — the Hibernia Bank, for example — that could eventually house arts groups if this opportunity is lost. But that means going back to the drawing board, even as tech startups eagerly anticipate the completion of their own office renovations.

City officials have also been contemplating a way to sweeten the deal with “a package of incentives to make the project pencil out for the developers,” Kim said. This could take the form of an infrastructure finance district, or building height bonuses, she said.

But even with accommodations for wealthy real estate speculators on the table, the plans could still go up in smoke, given Mid-Market’s new identity as a tech hotspot. “I’m very concerned about that,” Kim said. “The last thing any of us hoped to see is just office space development.”

Plans for the 950 Center aim to support economic diversity by placing anchor tenants in long-term leases, then incorporating shared facilities at affordable rates for part-time users in need of lower rent. The idea is to promote stability by sharing resources.

Among those who’ve expressed interest in moving into the 950 Center is the Lorraine Hansberry Theater, a prominent African American theater group founded in 1981 that lost its performance space but still maintains an office in the neighborhood.

“As a community, we can’t allow ourselves to lose Lorraine Hansberry Theatre,” Tenderloin Economic Development Project executive director Elvin Padilla wrote in a recent blog post. “I can’t think of a more meaningful place for its historic name and presence to be seen and felt.” Padilla has been integral in crafting 950 Center plans, but did not return calls seeking an interview for this story.

Youth Speaks, an arts organization that exposes Bay Area youth to spoken word, theatre, and poetry with a focus on kids from disadvantaged neighborhoods, has also expressed interest. “Our rent just doubled,” explained James Kass, the organization’s executive director. “It’s a typical nonprofit thing. We move in and then Yelp, or Zynga, or Twitter moves in, and the rent goes up.”

Kass added, “A lot of us are fighting to stay in San Francisco … but rent is cheaper in Oakland.” While he was hopeful that Youth Speaks would get an opportunity to move into the 950 Center, he wasn’t convinced that it would come to pass. “With the rapid growth, all of a sudden it’s a hotspot for redevelopment. It’s too bad there wasn’t something put down on paper awhile ago,” guaranteeing an art use, he said.

Shortly after Kim and Lee hosted the breakfast for Mid-Market developers, they succeeded in convincing Lone Star to include language in its Offering Memorandum asking prospective buyers “to help provide input into possible developer incentives for arts uses.”

At the end of the day, longtime arts and community-oriented groups fighting to keep their toeholds in San Francisco haven’t been promised anything, despite years of stakeholder meetings convened by the city emphasizing art as a central focus. Yet Padilla, clearly keeping his eye on the prize, lauded Kim and Lee for inventing perks to entice developers to support art over profit. “While this is indeed a major victory, the mention of a ‘potential arts component’ does not translate into a done deal for the 950 Project,” he wrote in a blog post. “Speculative bidders with billions of dollars in their arsenal will still try to avoid addressing this issue and test the resolve of City Hall and the local community. This means the hard work of advocacy … must continue.”