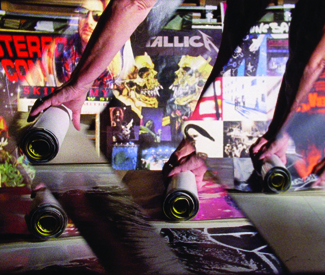 FILM At 52, the San Francisco Cinematheque is nearly the same age as the San Francisco International Film Festival, which kicks off its 56th incarnation later this month. And though there’s bound to be some filmmaker overlap between SFIFF and SF Cinematheque’s fourth annual Crossroads festival,

fans of avant-garde, experimental, and non-commercial films won’t want to miss the latter, a weekend packed with works by 48 artists across eight esoterically-titled programs.

Crossroads, which is curated by Cinematheque artistic director Steve Polta, boasts several world premieres, including a pair worthy of particular attention: Jodie Mack’s Dusty Stacks of Mom: The Poster Project, and Scott Stark’s The Realist. At 40-something minutes each, these are among the longer works included in the program; both make the most of their running times to achieve artistically innovative and thematically complex results.

A partially animated, fully musical chronicle of the rise and fall of her mother’s mail-order poster shop, Mack’s Dusty Stacks of Mom lifts its tunes and certain motifs from Dark Side of the Moon. (Though the connection is never explained, it’s likely the Dark Side poster was a best-seller for the store, which specialized in dorm-room classics.) “Come and tour with me/my mother’s poster factory,” Mack sings by way of narration, as her camera discovers piles of cardboard tubes, stacks of handwritten invoices (which hint at why the business faltered in the Internet age), and images of stars like Leonardo DiCaprio and Johnny Depp frozen in time as their 1990s selves.

Stop-motion animation and eye-candy collages bring these paper performers to life, with Mack’s good-sport mother appearing periodically alongside what’s left of her inventory. Though some of the Pink Floyd covers-with-new-lyrics can skew a bit twee, Dusty Stacks‘ visuals never falter; this was clearly a labor-intensive labor of love for Mack, who teaches animation at Dartmouth. A particularly inspired sequence flashes between the holy trinity of college-dude decor: Che, Bob Marley, and Tony Montana.

Dusty Stacks anchors Crossroads’ “Gigs in the Sky: Let There Be More Light!”, which contains films tied together by music and “this post-Kenneth Anger kind of colorful thing,” as Polta calls it. Unlike more mainstream fests, which curate shorts programs with an eye for obvious links between the works, Polta tapped into a more intuitive process.

“The program ‘on the beach (at night)’ has a really interesting film by Jim Drain and Ben Russell called Ponce de León. It’s got these really strange camera techniques in it, and the way it deals with visual space is really interesting, outside of what it’s saying about the way people spend their time and the way generations look back and forth at each other,” he says. “When I saw the opening film of that program, Danielle Short’s Lost Ambulation, it was like, ‘Oh yeah. There’s this sort of depth and flatness going on.’ At a certain level there’s a whole thread in the avant-garde world about these issues; it’s just like talking about painting when you talk about depth and flatness.”

The programs began to take shape early on, while he was looking at all 400-something Crossroads submissions. “You start to take notes: here are some trends. This film and that film would look really interesting back to back. They start to assemble in these little sort of gravitational groups,” he says. “That’s the fun, or the challenge, of curatorial work. It’s like cooking: how can you get a certain kind of flavor, and what can you do to bring that flavor out? Here’s a really interesting film, and putting this other film next to it will sort of change the way you look at it.”

However, he adds, “I also think it’s worth leaving these connections a little bit mysterious. It’s interesting to kind of put these ideas out there and let the viewers sort of pick up on them, or not.”

Local filmmaker Scott Stark is the only artist in this year’s Crossroads to command a solo program (save the inclusion of a 1947 short by Fernand Léger). Stark’s latest, The Realist, uses flickering images of mannequins and consumer goods to investigate themes of “loneliness, desire, and presenting yourself in a certain way,” Polta says; it’s a mesmerizing work. But Polta is quick to note that, again, a sense of mystery is key to the viewing experience. “Part of the fun of The Realist is discovering, as you’re watching it, that there’s some suggestion of a narrative.”

A program of sorta-family-related films, “(as if clinging could save us),” contains another of Polta’s standouts: Jonathan Schwartz’s Animals Moving to the Sound of Drums.

“The film resonates with a well-known classical avant-garde film, [Jack Chambers’ 1970] The Hart of London, which also has to do with repetition of generational experiences through time, and relationships between animals and humans,” Polta says. More than that, though, “[Schwartz] makes films that are really bold in the ways they reach out and embrace sentimentality and emotionalism. They have a faith in sincere emotion that hasn’t been really hip in the last decade. I’d like to think that there’s a balance of that in this festival, between a certain kind of irony and a certain kind of sincerity. People are trying to work that out right now in the avant-garde world right now, whether to be sincere or ironic.”

Another emerging avant-garde star, Michael Robinson, has addressed this dichotomy in his work. His dreamy, glimmering 45-minute Circle in the Sand closes out Crossroads’ last program, “Slaves of Sleep”/”Destroy, She Said.”

“[Robinson has] made a lot of short films using found footage, stuff from video games, and music you’d hear on the radio — but in a way that sort of dares you to squeeze some real, serious emotion out of pop culture that most people would treat as this kind of ironic thing,” Polta says. “Circle in the Sand is mostly, if not completely, footage that he shot. It’s a science fiction film with a vague narrative; it feels like it’s set at a certain point in human evolution where the mundane world that we live in now isn’t going to matter anymore. It’s got a lot of mystery in it about what’s going to happen next to the human race — which is what we’re sort of leaving you with in the final program.” *