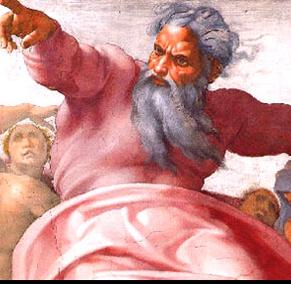 Reflecting the growing political acceptance of same-sex marriage around the world, Pope Francis has unexpectedly announced that God’s position on the issue is “evolving.”

Speaking to reporters in the Vatican following Easter services, the recently installed Pope acknowledged his own personal history of expressing opposition to same-sex marriage as Archbishop of Buenos Aires Jorge Mario Bergoglio.

But as Pope, which church doctrine indicates has a direct line to God, Francis said he intends to carry out the new edict once God finalizes His decision, which He is expected to do in the coming weeks.

“God is all-knowing and all-powerful, and He has the right to change His mind,” Pope Francis said. “Even when it comes to evolution.“

God’s apparent newfound openness to sanctifying same-sex marriage follows a similar position that President Barack Obama took last year when he announced his own “evolving” position on the issue and decided not to have the federal government continue defending the Defense of Marriage Act.

But unlike Obama, who has opted not to have the federal government proactively enforce the rights of people to marry whomever they choose, sources in the Vatican say that God and Pope Francis are considering a more aggressive stance on the issue. They say the Duo is considering allowing same-sex marriages in Catholic churches even in states and countries where it is now illegal.

“That would be big, the kind of move that only God could really make, politically speaking,” said the source, who asked to remain anonymous because he not authorized to speak to the press.

Pope Francis would not speculate on what may have changed God’s mind on the issue, although He is said be increasingly embarrassed by the intolerant statements of top Catholic officials and he’s worried about losing popular support among younger churchgoers who are more open to same-sex unions.

“Listen, the Book of Deuteronomy was written, what, almost 3,000 years ago?” our source said. “That’s a long time, positions have changed, and I think God recognizes that.”