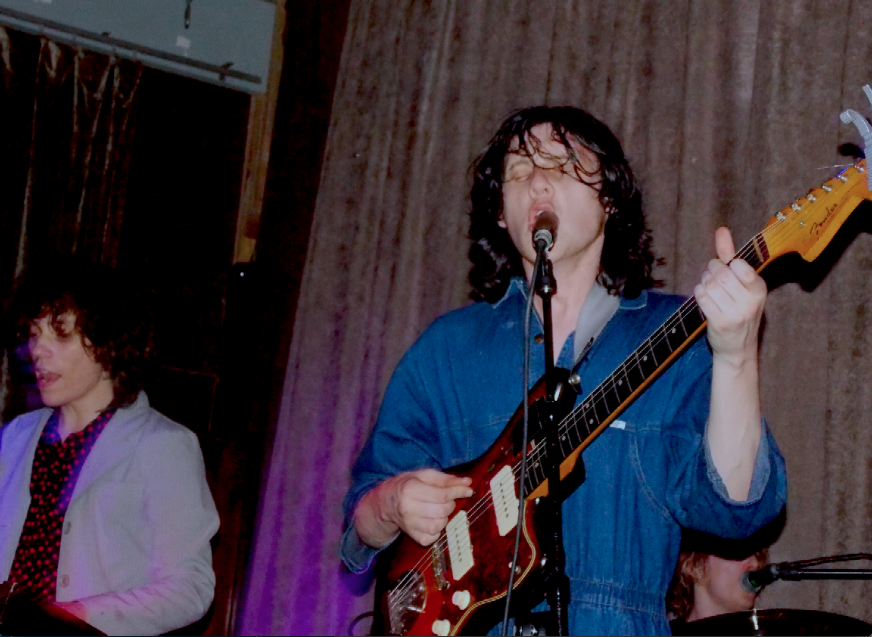 I experienced a strange phenomenon in the few days leading up to Tuesday’s sold out concert at Brick and Mortar Music Hall. The first in a series of strange events occurred in a coffee shop. I overheard one barista say to another, “Put on that Foxygen song.”

The next day, one of my favorite websites listed Foxygen’s “Shuggie” as the “Song of the Day,” and later that evening, a friend mentioned the band in a conversation that had very little to do with music.

These coincidences probably mean nothing other than the fact that the band, whose second album, We Are the 21st Century Ambassadors of Peace & Magic, came out in January, are taking off. But I found something strange in the repetitions, maybe a reflection of the fact that there seems to be a certain uncanniness to Foxygen in the first place.

At first listen, the band struck me as an almost unsettling echo of classic psychedelic rock. Even the album title bears striking resemblance to the names of 45-year-old concept albums such as The Kinks are the Village Green Preservation Society and Sgt. Pepper’s Lonely Hearts Club Band. And the parallels to the Kinks and the Beatles do not stop there. “San Francisco,” with its sparkling circus instrumentals and soft tinny vocals sounds like any song off of Village Green, and a line about introductions in the album opener “In The Darkness” feels like a direct nod to the album opener of Sgt. Pepper’s.

And while this makes for a pleasant listening experience – who doesn’t want more of the Kinks and the Beatles? – I found the derivativeness slightly problematic.

As soon as the band came onto the small stage at Brick and Mortar, though, that didn’t matter. Wearing embroidered frocks, suede coats, and ruffled blouses, costumes to complement the sound, the band played through a long set that, for all of its performative aspects, never felt forced. Each tune, from the feverishly noisy title track to the wistful “No Destruction,” poured out of the five-member band with ease.

Sam France, the diminutive frontperson, is a rockstar from a bygone era. Within the first few songs he had descended into the audience, shed his fur-lined coat to reveal a jean jumpsuit, and invited us all bowling. With beady eyes that shifted their focus in a manner reminiscent of the quietly plotting villain in any psychological thriller and fingers that moved as if he was casting a spell, he exhibited an oddly magnetic breed of charisma. And he had done all this while showing expert vocal range and control. He had the unique ability to sound both like Lou Reed to Nico.

And although the band’s music and style would seemingly make them untouchable, the venue and the familiarity on stage gave the performance an air of intimacy. While France’s swagger commanded the show, Jonathan Rado, with whom France formed the first incarnation of the band at age 15 (seven years ago – these guys are young), played a quietly endearing counterpart. Their interactions, including Rado muttering “asshole” into his mic, reminded us that though they perform like rock stars, they’re also kids that want to have a good time. And that kind of fun is contagious.

At the end of the night, Rado thanked the audience. “We have so many friends here,” he said and then corrected himself. “I mean, you’re all our friends.” And, with the help of that uncanny magic that seems to characterize the group, that felt true; for reasons that go beyond its restitching of classic rock, Foxygen feels like a band you’ve known and loved for a long time.