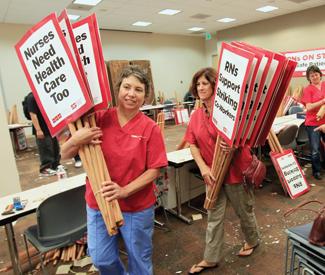 Ending a long and contentious labor impasse and setting the stage for the city to approve the pair of new hospitals that Sutter Health and its California Pacific Medical Center affiliate want to build in San Francisco, the California Nurses Association today announced that it has reached a tentative contract agreement with the hospital corporations.

As we’ve reported, reaching a deal with its nurses seemed to be the last major hurdle for Sutter/CPMC to overcome before the community-labor coalition would fully support the compromise hospital deal that a city-CPMC negotiating team announced on March 5. The nurses helped force that hard-won deal in part by aggressively advocating for St. Luke’s Hospital to remain financially viable and open to the low-income community it serves.

“We are delighted to finally reach a contract deal. It’s been six years of a very contentious relationship,” Eileen Prendiville, a registered nurse who works at CPMC’s California Campus, told the Guardian. She said that the nurses are thrilled to have attained good job security and patient advocacy standards while ensuring St. Luke’s stays open. “Working with a coalition of labor and community, we were successful at changing the face of healthcare in San Francisco.”

Under a previous agreement reached last year between CPMC and the Mayor’s Office, St. Luke’s would have had just 80 beds and could have been closed if the corporations revenues sagged. But activists and the Board of Supervisors were able to kill it and force the corporations back to the bargaining table.

In today’s print edition of the Guardian, I cover the movement to value caregiving in our uncaring economic system and the key role that CNA has played has in that growing movement. In San Francisco, CNA has faced down lawsuits, lock-outs, and harsh union-busting tactics as it pushed for contracts with strong patient advocacy protections.

Sup. David Campos, who help negotiate the latest hospital deal, said he was “thrilled” to hear Sutter/CPMC reached a deal with CNA. “We’ve always said it’s really important as we finalize the agreement that there is protection for the workers,” Campos told us.

Board President David Chiu, another key negotiator in the recent deal, told us, “I’m tremendously excited that there’s finally an agreement between oru nurses and CPMC, and thank the parties for their hard work in reaching this point. Along with the agreement we recently arrived at for the new Cathedral Hill and St. Luke’s campuses, this is an important moment for our city’s health care futue.”

CPMC spokespersons didn’t immediately respond to our calls for comment, but we’ll update this post if and when we hear back. The CNA press release announcing the deal and its details follows:

The agreement expands patient protections, strengthens the nurses’ bargaining and job security rights, and provides for economic gains. It must still be ratified by CPMC and St. Luke’s nurses who will vote on the pact in membership meetings soon.

The RNs emphasized that they are especially pleased with the overall political and community framework, announced earlier this month, that preserves St. Luke’s after years of uncertainly and threats of closure for the historic hospital that serves a medically underserved community in San Francisco.

CNA Executive Director RoseAnn DeMoro praised the unity of the nurses over the long contract fight and the broad public support for nurses as critical to protecting St. Luke’s and winning a new agreement for the nurses.

“San Francisco nurses have worked extremely hard, with the widespread support of a very broad community coalition and the support of a number of community leaders, including members of the Board of Supervisors, to protect this vital community resource. We are proud of the efforts of everyone who has held the line for maintaining St. Luke’s,” DeMoro said.

For the first time, the RNs at both hospitals will be under one contract with equal job security and seniority rights. The pact includes safe patient handling provisions to stem patient falls and injuries to patients and nurses. Additionally it obligates the employer to provide for meal and rest breaks and stipulates that new technology not supplant RN professional judgment.

On economics, all the RNs will receive across the board pay increases of 6 percent over the next 34 months, as well as additional pay based on years of service in the San Francisco hospitals, at other Sutter facilities, and foreign nursing experience.

“We are delighted to finally reach a contract settlement with Sutter/CPMC,” said California Pacific campus RN Susan Blaschak RN.  “Our contract provides for continued patient advocacy and will keep our professional nursing standards high for years to come.”

“The process has been tumultuous but in the end we had a vision and we were successful in performing the ultimate in patient advocacy – saving St Luke’s,” said Jane Sandoval, a St. Luke’s RN and CNA board member. “In addition, with our collective bargaining agreement we have preserved patient care standards, having a voice in that and in our professional integrity.”

“Working with a coalition of labor and community groups, we have been successful in changing the face of healthcare for San Francisco’s future. St Luke’s will not only remain open it will offer more healthcare services to residents in the community south of Market,” said Eileen Prendiville RN at the California Pacific campus of CPMC.

“Our contract settlement was also made possible by the strong support for the nurses by San Franciscans for Healthcare, Housing, Jobs and Justice as well as elected leaders who knew San Franciscans overall would be best served by a fair collective bargaining agreement,” said Sandoval.

CNA also calls on Sutter officials in its headquarters in Sacramento, and other Sutter regions to view the San Francisco agreement as a new opportunity to resolve outstanding contract fights with RNs in the East Bay and North Bay.

Nurses have now reached agreement with CNA-represented Sutter hospitals in the past nine months at Mills-Peninsula in Burlingame and San Mateo, Sutter Santa Rosa, Sutter Lakeside in Lakeport, and Sutter VNA in Santa Cruz.

“Every one of those disputes could also be resolved if those hospital’s officials would approach negotiations with a desire to stop the war on their nurses, remove unwarranted and punitive concessions demands, and show the community served by their hospitals that they desire a cooperative relationship with nurses based on therapeutic healing for their patients,” said Sandoval.