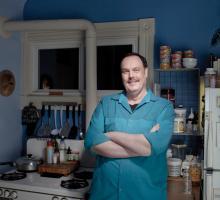 According to studies, queer seniors are poorer than their straight counterparts. They’re half as likely to have health insurance, and two-thirds as likely to live alone. Not to mention facing discrimination in medical and social services, retirement homes, and nursing care facilities. So much for the “golden years.”
Here in San Francisco, LGBT seniors face another grave threat: evictions. Many of our elderly live in rent-controlled apartments that are targeted by real-estate speculators and investors out to make big bucks turning them into tenancies-in-common.

With median rents close to $3,000 a month and vacancy rates low, the odds are pretty good that an evicted senior won’t find an affordable place in the city. For a senior with AIDS, an eviction is especially threatening since our city offers the best treatment and services. Studies show that people with AIDS who lose their apartments tend to die sooner, especially if they become homeless.

The only LGBT organization that actually addresses the housing needs of queer seniors is Open House. Its 110 units at 55 Laguna will be the first affordable queer senior housing development in the city. I hope it’s not the last. As for seniors with AIDS, there’s only one AIDS organization in the vast list of groups and services — the AIDS Housing Alliance — that actually finds housing for its clients. It was started by Brian Basinger, a gay man with AIDS, after he was evicted and his apartment was sold as a TIC.

No one knows how many LGBT seniors have been, and are being, evicted. Ditto for how many seniors with AIDS end up on the streets. We also don’t have stats on how many transgender seniors are victims of real estate greed or live in absolute terror of losing their homes.

The Rent Board doesn’t break down its eviction stats by sexual orientation or even age. The city’s homeless count doesn’t mention if someone’s queer or transgender. There is no way to determine how many LGBT seniors live in SROs or with life-threatening conditions such as mold or lack of heat. Or how many live in homes that have been — or are being — foreclosed.

That’s why the housing subcommittee of the city’s LGBT Aging Policy Task Force is holding a hearing into the housing needs and concerns of queer seniors. Information is power.

All LGBT seniors — housed and homeless — are invited to come testify about their housing issues. Whether they live in an SRO or a home that they own, whether they sleep in a shelter or a rent-controlled apartment, whether they’re in a subsidized unit or an illegal in-law, the subcommittee wants to hear from them about their concerns and needs.

The subcommittee will ultimately be making recommendations that will be included in a task force report on what the city can do to address LGBT issues.
LGBT seniors deserve their golden years.

The hearing is Monday, April 1, 9am to 12 noon, room 416, City Hall. Written testimony accepted. For more info, call Tommi at 415-703-8634.
Tommi Avicolli Mecca is a longtime queer and tenants rights/affordable housing activist who works for Housing Rights Committee. He is a member of the LGBT Aging Policy Task Force.