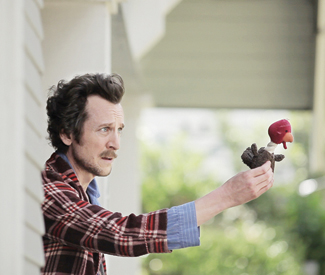 FILM Poor Dolph Springer. His life’s already oozing downhill — he’s been unemployed for months and yet continues to show up at his old job, to the white-hot annoyance of his former co-workers — when his beloved dog, Paul, goes missing. His favorite backyard palm tree is suddenly a pine tree. His alarm clock flips from 7:59 to 7:60 every morning. Pretty much everyone he meets, from a pretty pizza-restaurant cashier to a traffic cop to the “top-level detective” who gets drawn into the search for Paul, behaves precisely the opposite of whatever normal would seem to be. What’s a lonely man living in a permanent state of mindfuck to do?

Wrong is the latest surreal-absurdist-subversive comedy from writer-director-cinematographer-editor Quentin Dupieux, who rightly earned a cult following for 2010’s wickedly funny Rubber (about a tire that goes rogue after summoning Carrie-like powers of destruction). The French filmmaker — also known by his musical pseudonym, Mr. Oizo — attempts a slightly more conventional tale with Wrong; Rubber‘s Jack Plotnick stars as the hapless Dolph. Unfortunately, for all its deadpan weirdness, Wrong contains nothing so genius as that diabolical tire.

However, few movies do, and for every element that telegraphs forced quirk (rain pours down indoors at Dolph’s office, because … why?), there are several that actually do work. As Dolph’s gardener, Victor, French comedian Eric Judor mixes his thick accent with hilariously dry line readings, and the detective character (Eastbound & Down‘s Steve Little) dresses exactly like Indiana Jones for reasons unknown — which is just as nonsensical as the rain thing, but funnier for being more subtle.

The lost-pet narrative that propels the story is nothing original, though Dolph’s quest is perhaps more existential than, say, Diane Keaton’s in last year’s not-dissimilar (but much warm-fuzzier) Darling Companion. Both films put forth the idea that humans and dogs can communicate telepathically — though in Wrong, it’s made out to be hilariously literal. Soon after Paul vanishes, Dolph learns he’s been pooch-napped by one Master Chang (William Fichtner, sporting a rat tail), a Zen-ish self-help guru who steals other peoples’ pets at random to make sure they’re being properly appreciated. Traditionally, he returns the animals once everyone’s attitude has been properly realigned, but there’s been, uh, a complication with Paul, who is now well and truly MIA.

As Dolph rightfully freaks out — amid even more bad news, like when his boss (who already fired him once) tells him he really needs to stop hanging around, or when the pizza clerk turns shrill and decides that Dolph is her destiny — the Master tries to soothe him. See, he happens to be the author of a two-volume series, My Life, My Dog, My Strength, featuring clip-art illustrations (“Diagram 13-D: Mind Link”) that instruct humans on making psychic connections with their canines. Just mind-link with Paul, and he’ll be found!

If that sounds like a lot to take in, it is. I didn’t even get to the subplot about Dolph’s neighbor who goes jogging every morning, but has a mental block against admitting it. (This “joke” is made more than once.) Though Wrong is a mere 90-something minutes, its deliberately slow pace and frustratingly even keel can be off-putting. Clever touches, like the use of ominous sound flourishes at seemingly innocuous moments, enhance the film’s overall bizarro-world milieu. But its overall success likely depends not on Dupieux’s artistic choices, but on the individual viewing it — and whether or not he or she finds its details tedious, twee, or transcendent. Me, I miss the tire. *

WRONG opens Fri/29 at the Roxie.