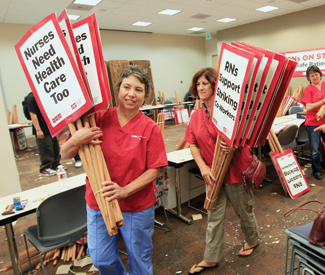 It’s no coincidence that the California Nurses Association has been the most active and effective union in fighting for a broad social and economic justice agenda, one that seeks to give greater value to caring and caregiving. Unlike many unions that fight mostly for their members’ interests, CNA is an extension of the nursing ethos itself.

“It’s not enough to advocate for patients at the bedside. We take it out into the streets and the community. That’s what nursing is,” Zenei Cortez, an RN of 33 years and co-president of CNA, told us. The CNA agenda has included support for increasing taxes on the wealthy to restore cuts to social services, advocacy for a single-payer healthcare system, affordable housing, and some of the best and sharpest opposition to the gubernatorial ambitions of Meg Whitman, who proposed deep cuts to state spending on education and other essential programs.

“We have a health care system that only cares about profits and nothing else,” said Chuck Idelson, who heads the communications staff that works for the nurses, “which is why you need people who value care over profit.”

And that’s the nurses, who have been growing in both numbers and political strength just as the healthcare profession has increasingly fallen under the sway of Wall Street and its values, making CNA an important political force.

“When I first started in nursing, we had a lot of time with our patients at the bedside,” Cortez told us. “But now, that human factor has disappeared.”

Nurses first began to flex their power early in Cortez’s career when “nurses were thought to be the handmaidens of doctors. But we were able to change that mentality,” one that was rooted in sexism and old domination-based models.

After the doctors, the nurses stood up to the healthcare corporations, winning statewide minimum patient care staffing ratios and contracts for themselves that gave them a stronger voice in patient care. As the Occupy Wall Street movement took root two years ago, CNA and its larger National Nurses United launched its Main Street Campaign to push people’s interests over those of the wealthiest 1 percent of Americans. “We have to have partnerships with our patients,” Cortez said. “The companies only care about the bottom line…We are not afraid to fight, particularly because we know it’s not for our own jobs, but for the good of our communities.”