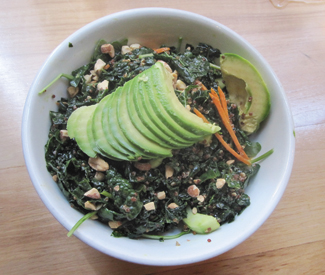 What to do when printing the news and raising hell leaves you with an appetite for healthy greens? Let the Guardian staff guide your salad steps.

Can a salad be declared a cult classic? Mention the Slanted Door to a veggie-loving type and inevitably, the grapefruit and jicama Salad is the first thing off his or her lips. It’s so popular it’s on the lunch menu, the dinner menu, and is offered for takeaway or casual noshing at Out the Door, next to the Ferry Building restaurant. Since when do people go to a fancy, critically-beloved restaurant serving all manner of Vietnamese cuisine and walk out raving about a humble salad? And maybe go back the next day ’round noon for the to-go version? Since Chef Charles Phan created this mélange of grapefruit, jicama, red cabbage, pickled carrots, and candied pecans, apparently. (Cheryl Eddy)

Peruse the soul food offerings at San Francisco’s mouthwatering Hard Knox Cafe and you will likely be tempted to go all-in. Three-piece fried chicken? BBQ pork spareribs? Mac ‘n’ cheese? You could go there. Or, you could exit this delightful Southern homestyle-cooking establishment without plunging into a food coma directly afterward. Go with the blackened shrimp salad and you won’t be disappointed. The shrimp is cooked to tender perfection and coated in delicious Cajun seasoning with just enough bite. Paired with mixed greens, iceberg lettuce, tomatoes, mushrooms, red onions, and slivers of pepperoncini, we recommend trying it with the vinaigrette dressing. The waitress told us the salad has changed up a bit from the way they used to make it, so you may have to adjust if it’s already an old favorite. (Rebecca Bowe)

This isn’t the salad to order when you’re looking to cut back on calories, but goddamn it is good. Pretty much all of Cha Cha Cha’s New World cuisine gets five stars in my book, but just the thought of its warm spinach salad is enough to make me drool. The dish consists of thick bacon chunks, bits of mushroom, and green onion tossed in a warm Dijon mustard-sherry wine cream dressing. The dressing is cool enough to keep the leaves from wilting and warm enough to encourage you to dig in while it’s hot. (Cortney Clift)

Dino kale is all the rage. And why shouldn’t it be? It’s a hearty, richly-vitamin-packed dark leafy green. Plus, it has the word “dino” in it, which gives it a super cool edge. Likewise, the Plant Cafe, with locations at the Embarcadero, Financial District, and Marina, is known for a more decadent, and thus more exciting, take on the healthier side of lunch. Put those together, and you get the delicious, vegan, and gluten-free dino kale salad, with the aforementioned leafy green, avocado, red quinoa, almonds, cucumbers, tomato, and a fresh and tangy lemon cumin vinaigrette — that cumin packs the wallop. It’s the dish a Yelper recently described as the “best salad on earth.” I’m not about to disagree. (Emily Savage)