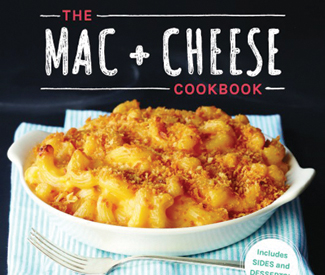 FEAST If that joint’s got you jonesin’ for some serious grub, look no further. We’ve rolled up the latest and greatest in stoner cookbooks, perfect for any discerning bud lover’s taste test. No, we didn’t include any weed-infused recipes in this list, but hey, feel free to augment the recipes in the brownie cookbook. Whether you’re a marathon midnight toker or a one hitter-and-quitter, we understand your need for accessibility, availability, and general ease in eating after that smoke sesh. But move beyond Pop Tarts — even the most gourmand of pot heads could use some guidelines for grilling up goodies every once in awhile.

THE MAC AND CHEESE COOKBOOK BY ALLISON AREVALO AND ERIN WADE

Get your mac on. Allison Areval and Erin Wade, co-owners and authors of The Mac and Cheese Cookbook dish out 117 pages dedicated to one of America’s most beloved dishes, based on the crowd pleasing specialties dished up in their Oakland restaurant Homeroom. The book is an homage to Homeroom’s endless variations on the classic orange variety. That’s good news if your cravings leave you hankering for a variety of tastes. Basic bechamel sauces figure on the pages alongside smoky bacon, blue cheese, sriracha, and jalapeno poppers. There’s even a section on desserts suitable for your post-mac munch.

FIFTY SHADES OF BACON BY JENNA JOHNSON AND BEN MYHRE

This self-proclaimed “erotic” cookbook sinks its teeth into all things bacon. Bacon au gratin, bacon-wrapped asparagus, bacon Alfredo (just to name a few) — this pork-inspired parody cookbook has all the seductive appeal of its sexy, silly source material. But instead of a half baked S&M narrative, Johnson and Myhre’s book gets you off with five different carnivorous sections of easy-to-follow recipes. A seductive succession of events unfolds with chapters entitled “Foreplay,” “Multiple Orgasms,” “Morning Wood,” and “Bondage”, where bacon bits, bacon jam, bacon martinis, and bacon peanut stoke your stoner flames. And even if pig parts don’t get you off, they’ll almost certainly taste better when you’re high.

TRY THIS AT HOME: RECIPES FROM MY HEAD TO YOUR PLATE BY RICHARD BLAIS

We’ve all done it. Remember that time when you were so high, you thought putting chocolate sauce on canned jalapeños was the most genius concept ever? Until, of course, you made that dream reality and were left with a wounded mouth and sobering regret. It turns out, however, that unlikely pairings aren’t always painful. Top Chef: All Stars winner Richard Blais proves it to us in this cookbook. From root-beer basted lamb-shanks to coffee butter pancakes, the chef’s recipes do flavor exploration the right way — 125 right ways, to be precise. Go forth and concoct creatively.

Lucinda Scala Quinn takes on take-out. Her mission in Mad Hungry Cravings is to reconcile the almost unbeatable deliciousness of fast food with the nourishment and nutrition that a home kitchen can produce, without a lot of work. Can good for you also be good for munchies? Damn straight. While raising three boys in NYC, where street food beats about anything found in the fridge (particularly if you’re a ravenous adolescent), Quinn had to create home-cooked meals capable of competition with street dogs and shawarmas.

Stoners, perhaps more than most, know that not all brownies are created equal. If you have ever tried to make a batch of brownies with your favorite herb, you know it requires a careful balance of elements and timing. This book’s sugary-sweet offerings are winners, and recipes are composed with chocolate and without for more innovative pastry pleasure. The pages start with the standards and segue into non-traditional options, like cocoa-avocado, pumpkin pie, and nonpareil brownies. If you’d rather stick to the classics, try whipping up chocolate walnut brownies or Cooking Penguin’s ace pecan blondies.