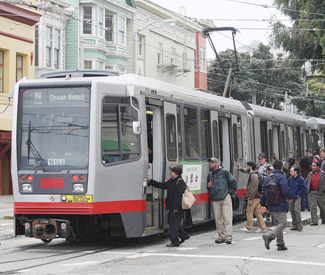 Muni switchbacks — that annoying practice where trains force all the passengers off well before the end of the line — have been in the news lately, with new Supervisor Katy Tang making switchbacks her first political priority.

But when you zero in on who bears the brunt of these service disruptions, it becomes clear that not all transit passengers are created equal. In fact, Muni data shows that the vast majority of switchbacks were concentrated in just three locations this past January.

San Francisco Municipal Transportation Agency reports shows that the top three stations hit by switchbacks in January were the T Third stop at Third Street and Carroll Avenue; the N Judah stop at Judah Street and Sunset Boulevard; and the J Church stop at Glen Park Station, in that order. While the January data provides only a snapshot, annual figures show that the T and J lines each averaged around 36 switchbacks per month since February of 2012, while the N averaged 49.

This map displays the top five locations where switchbacks occurred in January 2013.

Muni defends the switchbacks, saying that trains sometimes have to be rerouted to fill service gaps elsewhere. But for passengers, it’s a huge inconvenience — they’re left with little choice but to sit tight until the next train arrives, which in some cases can be as long as 30 minutes.

Switchbacks can happen in foul weather, and at night. They can impact elderly transit riders with few other transportation options. For weary Muni customers headed to the outskirts of the city after a long workday — or trying to get to a job or child-care responsibilities on time — a switchback can be the proverbial last straw.

The SFMTA data was included in a February memo to Sup. Carmen Chu, predecessor to newly minted District 4 Sup. Tang, who did not return Guardian calls seeking comment.

The 39 switchbacks that left southbound passengers waiting at the T Third Carroll stop, near Armstrong Ave, accounted for almost a third of all switchbacks recorded in January. Since they happen more frequently during off-peak hours, passengers are more likely to be left standing out on the platforms at night, when there are longer gaps between train arrivals.

That’s a public-safety issue: Police Department data accessed on San Francisco’s Open Data Portal shows multiple car break-ins, a robbery with force, and a meth possession charge all occurring nearby that train stop over the past three months.

According to the SFMTA memo, “Vehicle maintenance issues and automatic train control system issues accounted for most delays in which switchbacks were used to rebalance and restore scheduled service.” There were more disruptions on the K/T and N lines, Transit Director John Haley wrote, because they are “longer than the other lines and, as a result, have more opportunity to fall behind schedule.” The memo added that upgrades are underway to improve reliability and reduce breakdowns.

“SFMTA needs to prioritize providing reliable transit service to all San Franciscans,” Sup. Malia Cohen, who represents the Bayview, told us. “While I understand that systems need to be flexible to adjust to accidents or other issues, the data tells us that there is a pattern of these switchbacks in our outer neighborhoods in District 10 and District 4, disproportionately impacting low income transit riders, seniors and families.”

San Francisco’s Transit First policy, which appears in the City Charter, states: “The primary objective of the transportation system must be the safe and efficient movement of people and goods.” But Muni regularly boots three specific groups of train passengers off the trains, even though they have the farthest to travel. They’re left out on the platforms during off-peak hours, sometimes after dark, when there are longer wait times between trains. Does anyone actually believe that’s safe and efficient?