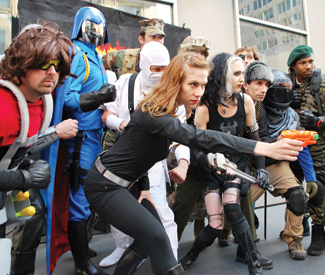 STREET SEEN The St. Patrick’s Day drunk bus cruising down Howard Street last Saturday didn’t quite know what to make of the group striking martial poses on the sidewalk in front of the Cartoon Art Museum.

Maybe the red-nosed boobs were suffering outfit envy — those tiny green hats bobbing precariously between stop lights, the sparkly temporary tattoos proclaiming allegiance to various alcohol brands, even the strobing shamrocks that bobbed on semi-erect springs and rigid plastic headbands were no match for the sartorial fireworks amassed that day by the Bay Area’s very own Cobra 1st Legion (www.cobra1stlegion.com), a year-old G.I. Joe cosplay group.

“A lot of this is about being a role model.”

I had pulled aside Ciera Johnson, who was attired in army green and arrows to portray the military cartoon’s covert operations specialist Lady Jaye, in the middle of Cobra 1st Legion’s appearance at the museum.

Around her, in an appearance partially geared toward hyping this month’s new 3D G.I. Joe: Retaliation, the Legion was collecting books for its favorite charity Operation Paperback, a nonprofit that sends reading material to deployed members of the military. Operation Paperback is championed by Larry Hama, who wrote the early G.I. Joe Marvel cartoons.

Johnson says that, despite the cartoon’s martial bent, service comes first and foremost for the men and women of G.I. Joe. “Their whole thing was to go against Cobra [Commander, head bad guy, duh]. They are all about trying to protect people.”

She apologized that she wasn’t in full regalia. Some of her pins, she explained, were in the van of a fellow Legion member who hadn’t yet penetrated the St. Patty’s Day parade traffic.

“I understand G.I. Joe is very jingoistic,” the gentle Holdaway told me somewhat apologetically. “For me, it’s what meant the most to me when I was eight.”

A long-time skeptic when it came to nerds dressing up as their favorite characters, worlds realigned for the radio host and musician the first time he saw someone dressed up as a G.I. Joe character. Suddenly, “to see it in real life was a dream come true.” Holdaway put out a call on Facebook to find like-minded fans, and in no time was convincing staff at the U.S.S. Hornet aircraft carrier docked in Alameda to let the group shoot a photography version of a comic book on deck.

Check the group’s Facebook page for the gleeful results. “When you go to our photo shoots, it’s just exactly like kids in a playground,” Holdaway smiles, inviting me to Cobra 1st Legion’s next outing. “If you find it perfectly acceptable to be an adult and go out in public like this, you should join us.”

At first, Holdaway admits the group existed purely for the photo shoots and the glory of sporting a top-notch Destro amulet atop an entirely accurate thatch of chest hair. But then, inspiration struck him: “If we can come together for hedonism, can we come together for charity?”

They could. Holdaway tells me Cobra 1st Legion has helped build a kids’ library in Kabul and a sci-fi library in a Virginia veterans’ hospital through Operation Paperback.

But — not that there’s anything wrong with this — the clothes are what I’ll remember from my time with the Legion. Mid-interview with Holdaway, a tall personage strides into the room wearing a blue suit, matching cape lined with red satin, white belt, black leather gloves, and yellow braided aiguillette affixed to one shoulder. Cobra Commander is in the house.

“Lookin’ good!” Holdaway hoots, before returning to our talk.