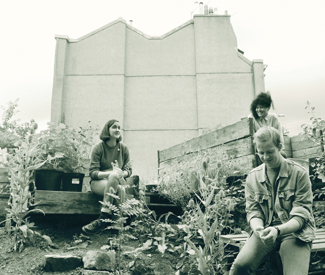 TOFU AND WHISKEY I was in the back of a tour van in a suburban parking lot once, on a warm summer night, with a dictionary splayed open on my lap. It was still hot enough outside that the back doors of the van were swung open out onto the asphalt, and some of the band members stood outside while the rest of us faced them on the back bench. We were all doing Bible drops into the dictionary, squeezing our eyes shut and trying to let our fingers pick random words to be shoved together into a shiny new band name. Whatever we came up with that night, they scrapped it.

Sometimes, the title matters. As much as we like to make-believe it’s always, always about the music, first and foremost, in this deeply saturated world of sound, a band can stand out simply with a clever nom de plume. This is not to say a group of musicians can rest on a cool moniker alone — there must be solid skill, passion, bursts of ingenuity, that certain unspecified spark, and aesthetic connected with that gift. They need to know how to play their damn instruments.

This is the case of Golden Grrrls (goldengrrrls.tumblr.com), a.k.a, the Glasgow and London based indie-pop group with the world’s greatest band name. That wordplay drew me in (and judging from the Twitter comments about it, it excited a lot of other people on social media as well). But it was the songs on their debut, self-titled full-length — which came out Feb. 25/26, 2013 on Slumberland Records (US) and Night School (UK) — that kept us listening. The band will make its first San Francisco appearance this Tues/26 at the Rickshaw Stop, opening for Veronica Falls.

I’m talking to Golden Grrrls guitarist Ruari MacLean between the album release and the Veronica Falls tour as he cooks dinner before heading out to a party on a Friday night. When I ask him about the connotations of including the three Rs à la riot grrrls, he says, surprisingly, “it never really occurred to me that people would think we were a riot grrrl band. I think over here in the UK, it just doesn’t seem to flag up much of a reaction, positive or negative, but in the US it’s been a different case.” I’ll say.

“Some people think it’s the worst name of all time, some people think it’s amazing. It was just a joke name for some music I recorded on my own over the course of a few weeks, when I was unemployed,” says the guitarist, who now works at a school. “I didn’t expect to play any shows, never mind have lots of people read about it on the Internet. I’d definitely have chosen something better if I’d thought things would pan out like this.”

The trio, made up of MacLean, drummer Eilidh Rodgers, and guitarist Rachel Aggs — all in their mid-20s, all three of whom provide vocals — breaks out with pop hooks and harmonies, but there’s a scrappy DIY charm, and an underlying punk energy. It began with seven-inches and splits, put out on UK labels like Night School; this full-length debut is the first Slumberland Records release.

And the band is neatly nestled in the Slumberland roster, with threads back to standout bands on the label such as Black Tambourine and Sea Lions (with whom the group toured and put out a split seven-inch), along with the shifting tempos of late ’80s/early ’90s acts like Throwing Muses, the dream pop early K Records roster, and fellow Glasgow natives, the Vaselines. In the past, Golden Grrrls have also been quoted as being influenced by classic American indie music (see above) as well as Australian and New Zealand underground music, like “a lot of Flying Nun/Kiwi pop stuff.”

As I mentioned to MacLean during our chat from his London flat, the best part about their releases so far is the initial confusion of not being able to immediately identify inspirations. The first three tracks on the new album, “New Pop,” “Past Tense,” and “Paul Simon,” all follow disparate patterns, and they expand and contract as the album deepens, like a mixtape of just one band.

“The number of awful indie bands in the UK that still, in this day and age, sound like Oasis is testament to that.”

While the trio was recording the debut record, MacLean says he was listening a lot to the reissue of David Kilgour’s Here Comes the Cars (Flying Nun), Arthur Russell’s band, the Necessaries, the Feelies, and early REM. It’s possible he was also listening to Slumberland labelmates, Veronica Falls (www.veronicafalls.com), who again, are headlining that Rickshaw show.

The two groups know each other well. They’ve played a smattering of shows together, and a few members of each band worked at a bar-cafe-venue in Glasgow called Mono. (There’s a record shop in there too, called Monorail, where Golden Grrrl’s Rodgers still works.)

Veronica Falls, often described as “goth pop,” also recently released a new record, Waiting for Something to Happen — the follow up to 2011’s emotional rollercoaster self-titled debut. That first record, which opened with deliciously moody “Found Love In A Graveyard” was a melancholy pop masterpiece.

Recently, the four piece — lead by vocalist-guitarist Roxanne Clifford — has caught some heat for straightaway repeating its winning formula, to which I say, so? If it works, and it makes me feel something deep, something uneasy and fidgety and romantic, why fight it?

In a more positive review, Waiting for Something to Happen was described as “the work of an undead ’60s girl group,” which stood out to me as the ideal combination, like if the Angels’ ’63 song “My Boyfriend’s Back” had instead been about a zombie lover in a leather jacket, revving up his motorcycle (as with the schlocky ’90s film of the same name, which I had completely forgotten about until this idea popped up).

Like your deepest, darkest fears and nightmares bubbling to the surface, encased in industrial noise and bleeding from the ears, grave-wave Bay Area act Moira Scar has released a new record, Scarred for Life, on SF label Resipiscent Records. Like Babyland meets the Locust meets some operatic singers of the post-apocalypse, Moira Scar will celebrate the release of said record at Cafe Du Nord’s monthly Dark Room night, a “queer and straight-friendly dance party” geared toward dark electro, industrial, punk, and goth bands. With Lady Bear and Her Dark Dolls, DJ Necromos, Le Perv, Omar Perez.

Aimee Mann has been showing up in weird places lately, right? As a pitch-perfect version of herself as a housecleaner on Portlandia, in that so-called Postal Service lost audition tape. Mann and her fellow musician Ted Leo are both known for idiosyncratic takes on storytelling (she of the quiet, folkier persuasion, he of verbose punk), and have forged a friendship on the road as solo artists. Recently, the pair announced a joint project, new band #BOTH, and for the duo’s first visit to SF, it naturally is playing Bottom of the Hill (otherwise known as BOTH). Even better, our own John Vanderslice — who recently released Kickstarter-funded new LP, Dagger Beach — opens. It’s like the brainy songwriter Olympics up in here.