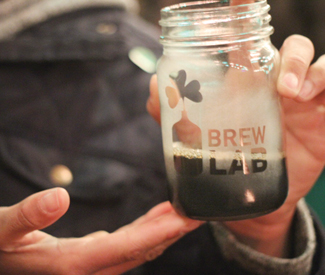 BEER My cab pulled up to an unassuming house on a quiet street in the Mission. An etched sign on the front porch bearing the words “Brewlab San Francisco” was my first greeting to the space. I entered, and after checking me in, a man in a green vintage Adidas tracksuit handed me a customized Mason jar and said, “Enjoy.” It was time for a tasting at Brewlab (www.brewlabsf.com).

This wasn’t my first time at the quickly growing hackerspace for homebrewers. What brings me back is not the brew found at its invite-only tasting events, but the community that produces those pints. It’s a community that is thriving with Brewlab as its hub.

The mission behind Brewlab is very simple: to create a space for home beer makers to gather together, share their creations, and get feedback from each other and beer enthusiasts. Brewlab will soon offer classes, and currently provides equipment-sharing opportunities for aspiring home brewers. It hosts tasting events and competitions where ale makers gain feedback on their work from their community.

“There wasn’t an organization supporting homebrewers at the time, so I decided to start one with my friend Emily Ford,” Sam Gilbert says via email. As Brewlab’s co-founder, he operates the organization with Matt Smith, who joined up when Ford left the group early on in its existence.

“At the time, I was really inspired by what ForageSF was doing for people making food at home, and so [I] wanted to try to do the same thing for home brewers,” Gilbert explains.

In a move that sprang from his interest in cooking, Gilbert started brewing about five years ago while living in Boston. Enticed by the complexities of hops and fermentation, he hasn’t looked back since: “There’s a lot of biology and chemistry to learn about, as well as equipment to build and maintain.” He came to San Francisco to work in the tech industry and started Brewlab soon after, in the spring of 2011.

“I quickly started craving that feeling of community you get from making stuff with like-minded people,” he says. “Home-brewing tends to attract people who are really passionate about the craft, but who also like to have fun. Drinking is built right into the hobby, after all.”

To say that Gilbert’s project has become a presence in the brewing community would be an understatement. Every time I’ve set foot in the Brewlab headquarters, I’ve been bowled over by the sense of friendliness and camaraderie — not to mention by the plain ol’ good times to be had there. People know my face, they know my name, they remember our last conversations — and I don’t even make beer. “There’s nothing like being in the middle of a growing community,” Gilbert writes, and surely he’s in a good position to judge.

“It’s been the most thrilling, exhausting, nerve-wracking, inspiring thing I’ve ever done,” he continues. “Brewlab sits at the intersection of what are probably San Francisco’s three favorite things: beer, tech, and local craftsmanship. So from a very early stage it felt like we had hit a nerve.”

Now in its second year of operation, Brewlab is working on ways to serve the homebrew community. From what I can see, the future is very exciting. At its last tasting event, sensors were placed at the bottom of each taster’s glass. They recorded how many times each beer was ordered. iPad stations in Brewlab’s garage allowed visitors to submit detailed feedback on the flavor profiles of the various pours.

In addition to its tasting events (which are now invite-only to deal with the unexpectedly high level of demand for these rad happenings) Brewlab is currently collaborating with nearly a dozen brewers to make a Belgian tripel that will age for six months in a wine barrel.

Perhaps most exciting of all, the group will be offering basic classes for people like me: wannabes who observe and admire the homebrewing craft but have no idea how to start making their own beer. The classes will be free to the public. No experience is necessary, and Brewlab’s equipment sharing program can help ease you into brewerdom on the cheap.

Throughout my conversations with Gilbert and Smith, it seemed clear that while they’re excited about expanding the Brewlab community and continuing to expand its programming, their primary goal is to nurture a small and strong community that stays true to the craft.

“So many awesome people have come through our doors, tasted our beers, and worked hard to support the organization at this point,” Gilbert writes. Thanks to Brewlab, it’s a good time to be a little guy in the brewing game in San Francisco.