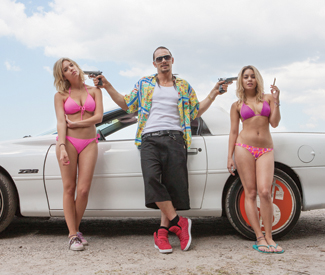 FILM Ten years after its release (and more than 15 years since Jim Van Bebber started working on it), the legendary cult film The Manson Family returns for special theatrical screenings in conjunction with a remastered Blu-ray release. Also on the bill: short film Gator Green, Van Bebber’s most recent project.

Personal circumstances have the Ohio native living in Florida these days. “I’m like, goddammit, I’m down here — I gotta make a movie! So that’s what I’m up to with Gator Green,” he drawls over the phone. “It’s about a Vietnam veteran who swindles his way into this alligator farm from the Seminole Indians in 1973, and abuses every right. It’s the worst portrait of America I can think of.”

Strong words coming from the guy who made The Manson Family, maybe the most gruesomely realistic study of the hippie cult, crafted with an eye for detail that speaks to true-crime scholarship of the highest order. His fascination with Charles Manson is a long-standing one, having begun in the late 1970s when the Helter Skelter miniseries aired.

“It was a big fuckin’ deal,” he remembers. He was still in elementary school at the time. “This is back in the day when you only had three channels. I was not allowed to watch the film, so I had to ask my friends on the playground, ‘What was that about?’ It kind of haunted me.”

Unlike Helter Skelter, which is based on the best-seller written by Manson prosecutor Vincent Bugliosi, Van Bebber’s film focuses on the months of drug-fueled delirium (“a crazy, psychotic rush to absolute zero”) prior to the Family’s crime spree.

“How can you touch Helter Skelter, which is basically a great depiction of the trial? I decided to do everything leading up to that. If you watched them together, it would be a great double feature — Manson 101.”

He began The Manson Family after finding underground success with 1988’s Deadbeat at Dawn, which he wrote, produced, directed, and starred in. (He has a similar stack of credits on Manson, too.) At the time, he’d recently seen Geraldo Rivera’s infamous jailhouse interview with a ranting, tongue-twisting Manson.

“I flipped out,” he chuckles. “I mean, are you kidding me?” Conveniently, he already had a friend who resembled Manson; the rest of the cast — many of whom appear fully nude and/or screaming, covered in blood, etc. — came from the theater department at Wright State University, where he was a student.

“I was very up-front with everybody. I was like, this is gonna be freaky,” he says. “We dove into it without the entire budget in place, and it became this ongoing thing. Thankfully we wrapped the photography within, like, four years. But then it was an eternal struggle to see it fully realized. I got plenty of offers, ‘Ok, let’s just slam this into the DVD market. But first, we gotta cut out this one scene …'”

Determined to stay true to his vision — dark and nightmarish though it was — Van Bebber held out until he met producers David Gregory and Carl Daft. “They got it done the right way. They’re warriors. And I’m pleased that it’s finding its Blu-ray home.”

Looking ahead, he hopes to expand Gator Green into a feature. “I’m just gonna keep going. I was born to make films, and that’s just what I do. Sometimes it takes me a long time, but it’s always worth it.”

Another sordid tale from the Sunshine State beckons in Harmony Korine’s Spring Breakers. The idea of enfant terrible emeritus Korine — 1997’s Gummo, 2007’s Mister Lonely, 2009’s Trash Humpers — directing something so utterly common as a spring break movie is head-scratching enough, even more so compounded by the casting of teen dreams Vanessa Hudgens, Selena Gomez, and Ashley Benson as bikini-clad girls gone wild. James Franco co-stars as drug dealer Alien, all platinum teeth and cornrows and shitty tattoos, who befriends the lasses after they’re busted by the fun police.

“Are you being serious?” Gomez’s character asks Alien, soon after meeting him. “What do you think?” he grins back. Unschooled filmgoers who stumble into the theater to see their favorite starlets might be shocked by Breakers‘ hard-R hijinks. But Korine fans will understand that this neon-lit, Skrillex-scored tale of debauchery and dirty menace is not to be taken at face value. The subject matter, the casting, the Britney Spears songs, the deliberately lurid camerawork — all are carefully-constructed elements in a film that takes not-taking-itself-seriously, very seriously indeed. Korine has said he prefers his films to make “perfect nonsense” instead of perfect sense. Spring Breakers makes perfect nonsense, and it also makes nonsense perfect.

After a slo-mo opening sequence of generic partying stuffed with the three Bs (boobs, beer, beach), Spring Breakers shifts to a crummy town in Southern Nowheresville, home to bored college students Brit (Benson), Candy (Hudgens), Cotty (Rachel Korine, wife of the director), and Faith (Gomez). (Can you guess which one is the Christian?) The friends moan about the spring break they’re being denied due to lack of funds, until a plan to rob a fast-food restaurant emerges, and Spring Breakers’ prevailing visual motif — ski mask-wearing hot chicks with guns — is born. It’s one of the film’s many “jokes without a punch line” (another favorite Korine pursuit) that the girls’ college life already resembles one big party — they’re already kinda living spraaaannng braaakkke forevaa, as Alien is fond of saying.

That’s important, because there’s a reason spring break is typically just a one-week affair. For most, full-tilt crazy is only a safe state of being when there’s a clearly-defined endpoint. School begins again; as your liver starts to repair itself, you’re left with a peeling sunburn, stories to tell, maybe a questionable new tattoo. For these girls, spring break is elevated into a chance to “find ourselves, to find out who we are,” according to one of Faith’s dreamy voice-overs. For certain among the group, it’s a quest that leads to some very dark places. Is that a good idea? What do you think? But don’t think too hard, now: to quote Alien again, “Bikinis and big booties, y’all … that’s what life is about.”