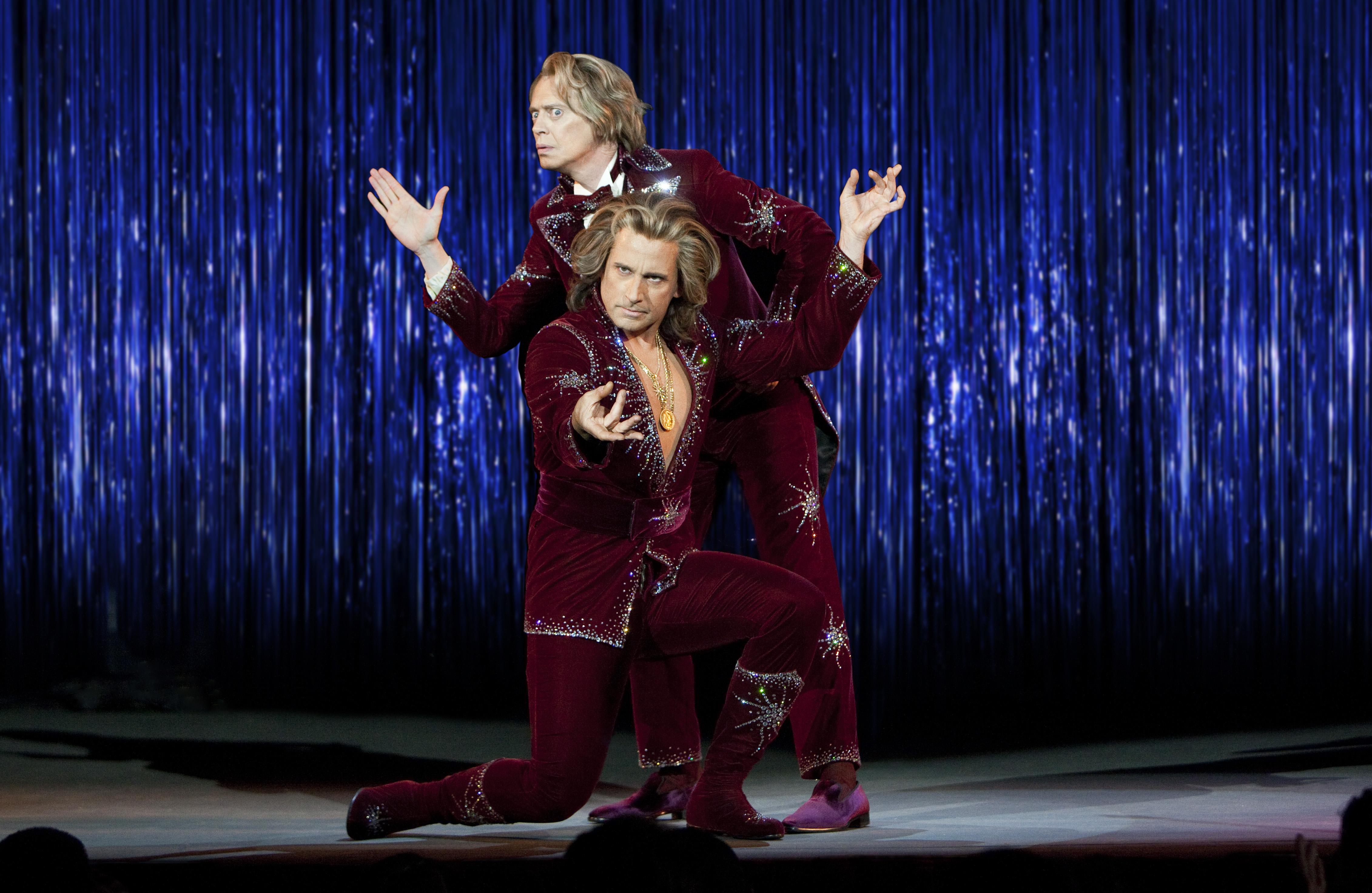 The newly-renamed CAAMfest (the film festival formerly known as the San Francisco International Asian American Film Festival) opens tonight with its own slice of March Madness: basketball-themed doc Linsanity. For more on that film and other CAAMfest documentaries, go here. You’ll find a rundown of films focusing on troubled family ties here.

Also this week: Park Chan-wook’s first English-language film, Stoker, opens tomorrow — it’s a creepy delight, and I spoke with Park about Hitchcock and more in this interview.

For those so inclined, Hollywood rolls out Halle Berry thriller The Call (make your own “phoning in her performance” joke here) and Steves Carell and Buscemi, plus Jim Carrey, as battling magicians in comedy The Incredible Burt Wonderstone.

The ABCs of Death Variety is the spice of life, yet this international omnibus with 26 directors contributing elaborate micro-shorts on various methods of death — one per alphabetical letter — is like eating dried dill or cilantro for two-plus hours. It’s pungent, but what might color a complex stew proves insufferable in this narrow one. Just why it seems narrow is anyone’s guess — this should have been a genius idea. Yet there are almost no outstanding or memorable contributions, despite the wide-open invitation to extreme content. Filmmakers include Jorge Michel Grau (2010’s We Are What We Are), Simon Rumley (of brilliant 2006 feature The Living and the Dead), Srdjan Spasojevic (2010’s A Serbian Film), cult-favorite actress Angela Bettis, and many more. Nearly all seem to have spent far more than their allotted $5000 budget. There are segments parodying exploitation cinema and video games; offering hyperbolic Terminator-style sci-fi; line-drawing and claymation segments; plus plenty of gross-out narratives. Yet it’s all surprisingly crappy (not least an episode called “Toilet”), with precious few more than halfway decent episodes. The sum impact is of a mean-spirited project that brings out the vacuously shock-value prone worst in everyone involved. (2:03) (Dennis Harvey)

Beyond the Hills Cristian Mungiu — one of the main reasons everyone’s all excited about the Romanian New Wave — follows up his Palme d’Or winner, 2007’s 4 Months, 3 Weeks and 2 Days, with another stark look at a troubled friendship between two women. Beyond the Hills‘ Voichita and Alina (Cosmina Stratan and Cristina Flutur, who shared the Best Actress prize at the 2012 Cannes Film Festival; for his part, Mungiu won Best Screenplay) were BFFs and, we slowly realize, lovers while growing up at a Romanian orphanage. When they aged out of the facility, the reserved Voichita moved to a rural monastery to become a nun, and the outburst-prone Alina pinballed around, doing a stint as a barmaid in Germany before turning up in Voichita’s village, lugging emotional baggage of the jealous, needy, possibly mentally ill, and definitely misunderstood variety. It can’t end well for anyone, as all involved — dismissive local doctors, Alina’s no-longer-accomodating foster family, the priest (Valeriu Andriuta), and the other nuns —  would rather not spend any time or energy caring for a troubled, destitute outsider. Even Voichita can only look on helplessly as an exorcism, a brutal and cruel procedure, is decided upon as Alina’s last, best hope. Based on a real 2005 incident in Moldavia, Mungiu’s unsettling film is a masterpiece of exquisitely composed shots, harsh themes, and naturalistic performances. Check out an interview with Mungiu here. (2:30) (Cheryl Eddy)

Don’t Stop Believin’: Everyman’s Journey The director of 2003’s Imelda returns with this portrait of a way more sympathetic Filipino celebrity: Arnel Pineda, plucked from obscurity via YouTube after Journey’s Neil Schon spotted him singing with a Manila-based cover band. Don’t Stop Believin’ follows Pineda, who openly admits past struggles with homelessness and addiction, from audition to 20,000-seat arena success as Journey’s charismatic new frontman (he faces insta-success with an endearing combination of nervousness and fanboy thrill). He’s also up-front about feeling homesick, and the pressures that come with replacing one of the most famous voices in rock (Steve Perry doesn’t appear in the film, other than in vintage footage). Especially fun to see is how Pineda invigorates the rest of Journey; as the tour progresses, all involved — even the band’s veteran members, who’ve no doubt played “Open Arms” ten million times — radiate with excitement. (1:45) (Cheryl Eddy)

A Fierce Green Fire: The Battle for a Living Planet San Franciscan Mark Kitchell (1990’s Berkeley in the Sixties) directs this thorough, gracefully-edited history of the environmental movement, beginning with the earliest stirrings of the Audubon Society and Aldo Leopold. Pretty much every major cause and group gets the vintage-footage, contemporary-interview treatment: the Sierra Club, Earth Day, Silent Spring, Love Canal, the pursuit of alternative energy, Greenpeace, Chico Mendes and the Amazon rainforests, the greenhouse effect and climate change, the pursuit of sustainable living, and so on. But if its scope is perhaps overly broad, A Fierce Green Fire still offers a valuable overview of a movement that’s remained determined for decades, even as governments and corporations do their best to stomp it out. Celebrity narrators Robert Redford, Ashley Judd, and Meryl Streep add additional heft to the message, though the raw material condensed here would be powerful enough without them. (1:50) (Cheryl Eddy)

Reincarnated Reinvention is the name of the game for some mercurial, inventive pop artists, but for rapper Snoop Dogg, now going by the moniker Snoop Lion — you get the scoop on the name change in this doc — transformation turns out to be unexpectedly serious, earnest business. Flirting with Cheech and Chong travelogue comedy, Reincarnated ostensibly spins off the making of the hip-hop artist’s forthcoming 12th album of the same name in Jamaica, with smokin’ production help from Diplo’s Major Lazer gang. The camera is there for many standard behind-the-music moments — sessions with family and adulation in the musical-fertile Trenchtown — along with many not-quite-ready-for-prime-times spent lighting up with other musicians, growers up in the mountains, and reggae forebears like Bunny Wailer. But there’s more going on beneath the billowing smoke: providing the context for today’s high times and ultimately chronicling the rhyme-slinger’s life and times and his path to Jamaica, reggae, and Rastafari spirituality and culture, Vice Films director Andy Capper lays the foundation for Snoop’s shift from rap to Rastafari by revisiting his gangster youth, the rise and fall of Death Row Records, the passing of 2Pac and Nate Dogg, and the music that made the man’s name —and continues to give us a reason to care. The easy, sexy charisma that made Snoop a star is on full display here, and doubtless his latest experiences on reality TV have made Capp’s job that much easier when it came to digging deeper, while the clouds of herb, Cali and Jamaican alike, give viewers a taste of the fun, and possibly healing, attendant with life with the Doggfather. (1:36) (Kimberly Chun)

Upside Down This sci-fi romance from Argentine-French director Juan Solanas is one of those movies that would look brilliant as a coffee-table photo book — nearly every shot is some striking mix of production design, CGI, color grading, and whatnot. Too bad, though, that it has to open its mouth and ruin everything. Jim Sturgess and Kirsten Dunst play star-crossed lovers who live on adjacent twin planets with their own opposing gravitational forces. Nonetheless, they somehow manage to groove on one another until the authorities — miscegenation between the prosperous residents of “Up Top” and the exploited peasants of “Down Below” being forbidden — interfere, resulting in a ten-year separation and one case of amnesia. But the course of true love cannot be stopped by evil energy conglomerates, at least in the movies. Sturgess’ breathless narration starts things off with “The universe…full of wonders!” and ends with “Our love would change the entire course of history,” so you know Solanas has absolutely no cliché-detecting skills. He does have a great eye — but after a certain point, that isn’t enough to compensate for his awful dialogue, flat pacing, and disinterest in exploring any nuances of plot or character. Dunst is stuck playing a part that might as well simply be called the Girl; Sturgess is encouraged to overact, but his ham is prosciutto beside the thick-cut slabs of thespian pigmeat offered by Timothy Spall as the designated excruciating comic relief. If the fact that our lovers are called “Adam” and “Eden” doesn’t make you groan, you just might buy this ostentatiously gorgeous but grey-matter-challenged eye candy. If you think Tarsem is a genius and 1998’s What Dreams May Come one of the great movie romances, you will love, love, love Upside Down. (1:53) (Dennis Harvey)

War Witch They should give out second-place Oscars. Like, made of silver instead of gold. In that alternate-universe scenario, Canadian writer-director Kim Nguyen’s vivid, Democratic Republic of the Congo-shot drama might’ve picked up some hardware (beyond its many film-fest accolades) to go with its Best Foreign Language Film nomination. War Witch couldn’t stop the march of Amour, but it’s deeply moving in its own way — the story of Komona (played by first-time actor Rachel Mwanza), kidnapped from her village at 12 and forced to join the rebel army that roams the forests of her unnamed African country. Her first task: machine-gunning her own parents. Her ability to see ghosts (portrayed by actors in eerie body paint) elevates her to the status of “war witch,” and she’s tasked with using her sixth sense to aid the rebel general’s attacks against the government army. But even this elevated position can’t quell the physical and spiritual unease of her situation; idyllic love with a fellow teenage soldier (Serge Kanyinda) proves all too brief, and as months pass, Komona remains haunted by her past. The end result is a brutal yet poetic film, elevated by Mwanza’s thoughtful performance. (1:30) (Cheryl Eddy)