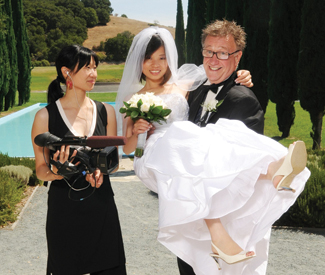 FILM Rebellious Chinese bloggers, women crusading against domestic violence in Southern India, basketball sensation Jeremy Lin, and a high-energy Thai cheerleading team: if you seek inspiration, head straight to the documentary films of CAAMFest, formerly the San Francisco International Asian American Film Festival. The Center for Asian American Media rolls out its newly revamped festival March 14-24, with an array of films, music, and food-themed programs. Though the fest does typically boast a noteworthy selection of docs, the 2013 slate is particularly strong.

North Korea is never really out of the news, but it’s been spotlighted recently thanks to pop-culture punch line Dennis Rodman’s recent visit. Publicity stunts have no place in either Memory of Forgotten War or Seeking Haven, both of which offer wrenching stories of families separated by the troubled country’s tightly-controlled borders. Memory centers on now-elderly survivors of the Korean War, which “ended” 60 years ago with no formal peace agreement. Deann Borshay Liem and Ramsay Liem’s sensitive portrait mixes old photos, newsreel footage, and present-day interviews to piece together the devastating effects of the civil war — especially the pain of not being able to contact relatives living mere miles away in the north, due to the threat of harsh repercussions on both sides.

A younger protagonist faces a similar struggle in Seeking Haven. Hein S. Seok, Lee Hark-joon, and Ko Dong-kyun’s film follows Young-soon, a North Korean refugee whose successful escape to China and then South Korea (a perilous journey through jungles and across rivers, amazingly documented here) is tainted by worries about the family she left behind. In particular, she fears for a sister who may be near death in a prison hospital — and there’s not enough bribe money in the world that can free her. The film’s most striking sequence occurs when the filmmakers drive Young-soon along the border and up a mountain in China overlooking the village where she grew up. Her reaction to being so close to a place she can never return to is a mix of excitement, fear, nostalgia, and longing — and relief, too.

Borders also figure prominently in Stephen Maing’s engaging High Tech, Low Life, about two pioneering Chinese bloggers, or “citizen journalists” — although here, the invisible line refers mostly to the “Great Firewall,” which controls and censors much of China’s internet content. Both men are constantly under threat of arrest thanks to the stories they report, though they otherwise couldn’t be more different. “Zola” is a young, Twitter-addicted upstart who enjoys his online fame (“I used to be a nobody, until I discovered the internet”) as much as he enjoys exposing illegal evictions and corrupt murder investigations. Older, wiser “Tiger Temple” uses his blog as a force for real change, cycling hundreds of miles to talk with struggling farmers, and taking an active role in helping their situation.

Also from China, When Night Falls is not strictly a documentary, but it’s closely drawn from real-life events. It concerns a high-profile, notoriously complex case in which a Shanghai man slashed his way through a police station, killing six cops as revenge for an alleged beating he’d been administered earlier for the crime of riding an unlicensed bicycle. The film, which focuses on the man’s quiet but determined mother (played by Nai An), is less notable for its cinematic merits than its political ones; needless to say, Chinese authorities are neither fans of the film nor its director, Ying Liang.

An ultimately more uplifting tale can be found in Invoking Justice, Deepa Dhanraj’s revealing examination of women’s rights in Tamil Nadu, South India (spoiler alert: there ain’t many, violence against women is sadly common, and many cases go unpunished). Hope comes in the form of Muslim wives, mothers, and daughters who form the first-ever Women’s Jamaat, assertively working to change the way divorces, abuse cases, rapes, and worse are handled in their communities. “If we talk about our problems openly, we will be able to overcome them,” one member reasons, and the film does indeed chart some baby-steps of progress as a result of their efforts.

Bay Area filmmaker Evan Jackson Leong’s highly enjoyable Linsanity is the perfect fit for CAAMFest’s opening-night celebration. It follows Palo Alto’s own Jeremy Lin, a hugely charismatic documentary subject, as he rises from Harvard standout to struggling NBA rookie, giving plenty of context to his apparent insta-fame while considering how his Asian American-ness both helped and hindered his career. Also from the Bay Area is Debbie Lum’s remarkably all-access — often uncomfortably so — Seeking Asian Female, look at the relationship between sixtysomething white guy Steve and the half-his-age Sandy, a Chinese woman who agrees to marry him after meeting him online. Neither partner is as stereotypical as they first appear, and as Lum herself is reluctantly drawn into the story, a complicated, frustratingly human (but always compelling) drama emerges.

One more plug: Luke Cassady-Dorion’s The Cheer Ambassadors, about Bangkok University’s internationally acclaimed cheerleading team. The kids are guided through their high-flying, hip-thrusting routines by a dynamo of a coach, equal parts sparkle and steel, who speaks only in quotable declarations (“I was born to be a cheerleader!”) and motivational phrases (“Dreams are what make your life better”). This has gotta be the feel-good movie of the festival; insert your own “stand up and cheer” joke here.