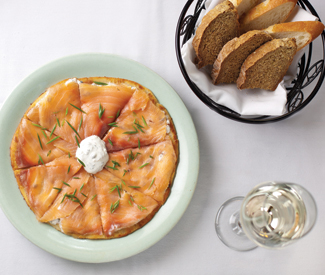 IRISH It’s early, even for me, to be in a pub. But cookbook author and Irish chef Larry Doyle requested that I make the trek to meet him at his Taraval and 29th Avenue Parkside Tavern at 9am so we can talk about his kitchens’ plans for St. Patrick’s Day. Sagely, he begins by proposing Americanos and telling me about latchkey kid dinners from growing up in Dublin.

“Whoever got home first in the evening would cook dinner,” he says. That was often Doyle. Starting at 11 years of age, he would work off of the food Mom prepped before leaving for work (she always made dessert first, he remembers), eventually creating the dinners from scratch. “Irish food is rustic, simple,” Doyle tells me, reminiscing about the kitchen gardens from which the family pulled each night’s veggies.

The country’s “Fourth of July,” as Doyle describes St. Patty’s Day celebrations back home, has been adopted by the world as much as its Guinness and Jameson. Dublin hosts a parade akin to the New York City Macy’s Thanksgiving processional and shamrocks and leprechauns rule the day in Eire, just as they decorate tiny hats and novelty t-shirts here in the States.

The only difference between the celebrations, Doyle says, is a slightly less fratty attitude in Ireland towards celebratory green beer bonging.

“Which I don’t have any complaints about,” the bar owner clarifies. Doyle not only owns the four-year-old Parkside, a well-appointed tavern positioned among Korean restaurants, dancewear suppliers, and single family Sunset homes, but works as chef at Johnny Foley’s in Union Square. Both spots get packed out, he says, over the holiday.

But it is at the Parkside where his smoked salmon boxty (a potato pancake topped with a dill sauce made of sour cream and shallots, and fish) “causes riots” when left off the menu and his Irish soda bread-and-butter pudding, which has been known to incorporate banana and feature a Bailey’s sauce, remains the most-ordered dessert. Should you doubt Doyle’s chops, do know that he wrote the book on Irish cooking (Irish Pub Cooking, Bristol Publishing Enterprises 2006, 139pp, $8.95).

Both boxty and pudding will be available at Parkside this weekend, as well as oysters, a stew made of simmered lamb cubes, and the traditional St. Patrick’s gut bomb of corned beef, white parsley cream sauce, and cabbage. Vegetarians can take solace in the regular menu’s wild mushroom penne, or Dubliner cheddar cheese plate.

Irish breakfast featuring black and white pudding topped with tomato and the starring role sweet, chewy imported bacon is served Friday through Sunday all year long, but Doyle pledges that brunch will be a particularly nice scene during this weekend’s festivities (he counsels coming close to the Fri.-Sat. 11am, Sun. 10am opening of the doors to ensure a spot to sit.)

So eat something in between shot-with-stout-chasers, dammit. There’s hardly an SF neighborhood — side eye, Castro — without an authentic spot that’ll be rolling out the orange-white-and-green flags.

LARRY DOYLE’S TOP PLACES TO REST YOUR PINT THIS WEEKEND