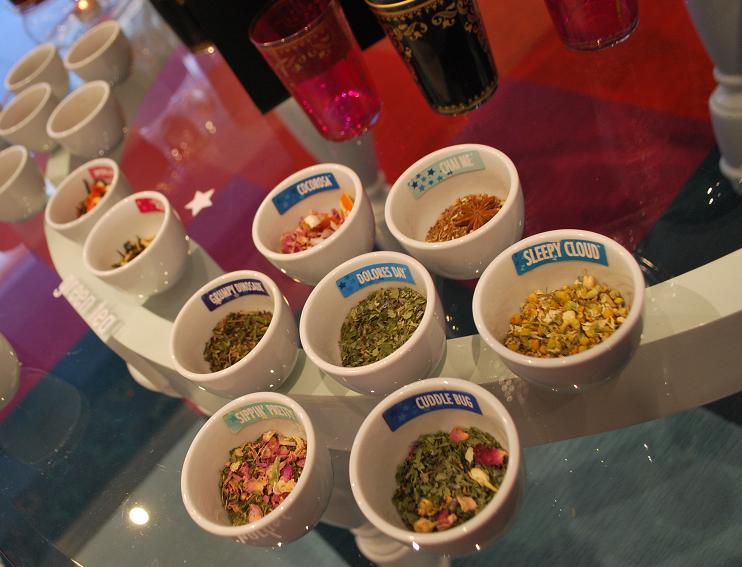 STREET SEEN The fact that that our conversation is taking place to beat of Carly Rae Jepsen’s 2012 seminal classic “Call Me Maybe” leads me to believe that T-We Tea owner Christopher Coccagna is being real when he says he’ll be holding 12:30pm dance parties for the FiDi lunch set in the darling tea shop he just opened in the neighborhood.

It also leads me to believe that Crocker Galleria may be downtown’s most fun mall — or at least, that it’s on the way.

“I was totally down on having a retail store,” Coccagna tells me as we ship cups of his “Chai Me” blend in his small shop’s kiki parlor. For years he sold at events like the Renegade Craft Fair, consterning regulars who often ran out of his cheekily-titled single origin teas (“Bicurious George,” “Sexpot,” and “Hipsters in Wonderland”) before the next sales opportunity. But the five-year lease contracts often associated with renting commercial space scared the young business owner away.

In contrast, Crocker Galleria is offering him a much more flexible agreement and he’s been presiding over his space, lovingly decorated in fuchsias and Moroccan poufs since February. “I’m going for Euro pop, eclectic, and adorable,” Coccagna says.

That craft-fair-over-corporate-chic aesthetic may speak to Cushman and Wakeman retail manager Sabrina Goris’ plans for Crocker. In the past few years, Versaces and Dolce and Gabbanas have been vacating the center. At the moment, Ralph Lauren’s shuttered doors make a great visual metaphor for this sea change, although not as good as the expensive tiling floor work that Versace left behind for new tenant VIP Luggage. The turnover has made way for a mix of tenants who count 85 percent local owners among them.

Goris partners with local business nonprofits like La Cocina and Renaissance Entrepreneurship Center to attract new entrepreneurs to their first brick-and-mortar location. La Luna Cupcakes, a La Cocina grad, is set to open in Crocker this spring and Tomboy Tailors, the city’s best genderqueer place for a butch dandy to get a perfectly tailored three-piece, went through the Renaissance program and also opened at Crocker this year.

The challenge with the space is figuring how to make the robust lunch crowd that comes for the mall’s top floor food court stay to shop. Every Thursday from 11am to 3pm a year-round farmer’s market sets up on the first floor, opening on Tuesdays during the summer as well. The mall even hosts a concert series to get shoppers in the glass doors.

Like the rest of the universe, Crocker is experimenting with pop-ups, too. On the first floor, a quartet of small local clothing and accessory companies opened a single storefront in February. Surf brand After Eleven and its irreverent pizza cross t-shirts, Topshelf Boutique, kids shirts and zoo-themed tees from Animal Instinct, and Embergrass Jewelry bring a fresher fashion tone to the mall. Their pop-up run’s was recently extended — it’ll now be open until the end of March.

Christina Ruiz, who opened Topshelf Boutique originally in a van that traveled about, bringing gauzy, bright dresses, studded button-downs, cat-eye sunglasses, and the occasional vintage piece to shoppers, has had a lot of luck in the pop-up space. She admits that originally, she wasn’t sure if the Topshelf’s club casual style would sell to the big-money downtown types.

“I was surprised that I sold so well,” she says. “I worked as a bartender for a long time when I didn’t have to dress up for anything.” She’s grown to appreciate the day job schedule, though. “I really like it here because [customers come through] Monday to Friday, 10am to 6pm. That’s so not traditional for retail.”

Office workers who wear studs, tea shop kikis, a mall that could be kind of cool — sounds like a different kind of commercial community is being built. Says Coccagna of this mall magic: “you can feel the shift here.”