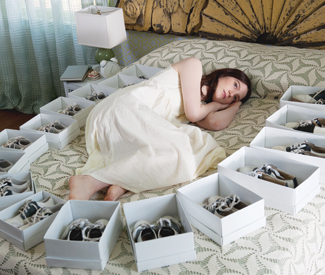 FILM None of the characters in Park Chan-wook’s English-language debut, Stoker, devour a full plate of still-squirming octopus. (For that, see Park’s international breakthrough, 2003’s Oldboy; chances are the meal won’t be duplicated in the Spike Lee remake due later this year.)

But that’s not to say Stoker — with its Hitchcockian script by Wentworth Miller — isn’t full of unsettling, cringe-inducing moments, as the titular family (Nicole Kidman as Evelyn, the dotty mom; Mia Wasikowska as India, the moody high-schooler) faces the sudden death of husband-father Richard (Dermot Mulroney, glimpsed in flashbacks) and the equally sudden arrival of sleek, sinister Uncle Charles (Matthew Goode). With a translator’s help, I recently spoke to Park about his latest thriller.

San Francisco Bay Guardian Especially with Stoker, it’s clear that Hitchcock has influenced you as a director. Do you have a favorite of his films?

Park Chan-wook Vertigo (1958) was a big film in my life. Before Vertigo, I wanted to be a filmmaker, but I had only thought about it. After seeing it, I decided that I must become a filmmaker. It’s my favorite Hitchcock film. But ever since that first time I saw it, I’m scared of seeing it again, out of fear that it might be less than I remember it.

SFBG Stoker also reminded me of The Bad Seed (1956) — particularly when a voice-over suggests “we are not responsible for what we come to be.” What are your thoughts on that? Is evil hereditary?

PCW I saw Bad Seed when I was little, with my parents on TV. But it was such a long time ago that I can’t really recall any of the details from it. So I wasn’t consciously bringing anything from it here. Maybe subconsciously I was influenced by it, though — if I see it again, I might realize that.

As far as evil being hereditary, I want to leave Stoker open to different interpretations. That’s part of the joy I want to give to the audience. That’s why I don’t really want to define it in any way. But if I was to give you one possible interpretation of what [that voice-over means], perhaps I intended the opposite, which is to say, does India not feel any responsibility about her actions? No, actually — maybe she feels acutely responsible. She knows it very well, but she doesn’t want to admit it. But there are many other interpretations of this.

SFBG A lot of your films, including Stoker, are about families with unusual dynamics. What attracts you to these kinds of stories?

PCW Family relationships are something that every audience member can identify with, and can understand. But a happy family is a boring story to tell!

SFBG Due to the costumes and the production design, I was convinced at first that Stoker was taking place in the 1950s or 60s — but then it’s revealed that India was born in the 1990s, and this is in fact a very contemporary story. Was this a deliberate choice to make the story feel even more otherworldly than it already does? It kind of felt like the whole thing was taking place in a parallel reality.

PCW The moment you see a cell phone, you realize this is a contemporary story — but even then, if you go back and look at the film from the beginning again, you may actually realize that the clothes they wear, and the way the house is decorated, are actually not completely anachronistic. They are still modern-day.

However, I do admit that it’s one of the first things I talked about with the producer after I read the script: the timelessness of this film. And the same goes for the location as well. It was deliberate in how I didn’t tie the story down to any particular location in America; you can’t really tell where the story takes place. That was intentional, and the reason I was trying to achieve this was that I was trying to create a more archetypical story.

SFBG I have to ask: Harmony Korine has a cameo as India’s art teacher. How did that come about?