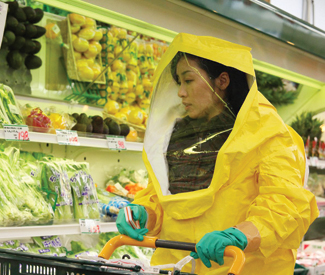 FILM Even Fukushima Daiichi-style nuclear meltdowns can’t sever the blood ties that bind a brood of CAAMFest films that focus on family. Modernity nevertheless ushers in a set of unique struggles in these films, not exactly family-friendly fare, though most are fulsome with empathy for these clans under pressure and in the viewfinder.

Throwing the lid back on the Mosuo Chinese ethnic minority, while unveiling the economic and cultural stressors weighing on families struggling to keep up in the soon-to-be world’s largest economy, The Mosuo Sisters documents the lives of two young women from a small village in the Himalayan foothills. Eldest sibling Juma is trying to maintain her role as family breadwinner — she sings in big-city clubs that trot her out like an exotic specimen — while the younger Latso is rooming with her, studying accounting and embracing urban life. It takes a global downturn to tear the two apart, as Latso is encouraged to help out on the farm and Juma finds it harder to remain the de facto matriarch-at-large, while the Mosuos’ way of life — in which “walking marriages” place the power and offspring in the hands of women and their households — is chipped away from afar by the draw of neon-dappled cities, rendered as eloquent, inexorable rivers of headlights by director-cinematographer Marlo Poras.

Two families — one far from home and the other navigating a thicket of cultural, political, and product safety issues — feel the pain of Xmas Without China in Alicia Dwyer and Tom Xia’s gently humorous and humane doc. Chinese-born, California-raised Xia is by all respects American (apart from his green card), but as a firestorm ignites over the lead in Chinese-made toys and the threat of Chinese industrial might, he comes up with the genius plan of finding out just how deeply China and its goods have rooted itself in the US, despite Americans misgivings. He finds a family, the Joneses, who are willing to go without anything made in China through the Christmas season — just to see if they can.

Meanwhile, Xia’s parents, who have set themselves up in their own American dream, a colonial McMansion, are also put under the lens as they struggle to keep up with their own neighboring Joneses, plotting the biggest Christmas-lights display on the block — and coping with homesickness for family back in the old country. As dad Tim Jones sneaks into the stash of verboten Chinese goods for his beloved Xbox, Xia uncovers his own insecurities, as he finds himself lying to the Joneses about his citizenship and hiding behind a facade of assimilation.

Taking the kin out on a pulpy, not-for-youngsters thrill ride, director-writer Ron Morales’ Graceland uncovers a lurid Manila of child sex workers, corrupt politicians and cops, and trash mountains. Chauffeur Marlon (Arnold Reyes) is tasked with enabling the dirty work of his politico boss, Changho (Menggie Cobarrubias), including packing up and paying off the little girls he drugs and rapes. The switch comes when kidnappers come for both their daughters, and the once-powerless servant becomes inextricably embroiled in the crime. Though occasionally threatening to topple over into scene-chomping territory and finally revealing drive-through gaps in its plot, the full-frontal Graceland is still capable of inspiring admiration for its sheer gusto, refusing to flinch at the brutality wrought on young girls’ bodies and likewise daring you to tear your eyes away in complicity.

Blood — whether it pulls a family unit together or rips them apart with fears of radiation contamination — underlies the apocalyptic scenes of The Land of Hope, the first feature film to grapple with the 2011 Fukushima disaster. Life in fictional Nagashima seems idyllic until the arrival of an earthquake and tsunami that ushers in a largely unseen nuclear disaster. Dairy farmer Yasuhiko (Isao Natsuyagi) forces his son Yoichi (Jun Murakami) and daughter-in-law Izumi (Megumi Kagurazaka) to leave him behind, along with wife Chieko (Naoko Ohtani), who suffers from dementia; it’s a sacrificial gesture that evokes 1983’s The Ballad of Narayama‘s mash-up of filial piety and noble embrace of death.

Yoichi denies reality as vigorously as he can, until Izumi becomes pregnant and learns that their new home also reads high in radiation. Writ with an eye to psychological trauma rather than physical dangers, Sion Sono (2002’s Suicide Club) has likely made his most ambitious film to date with Hope. It makes stirring use of exquisitely subtle images that imbue empty towns and blowing wind with dread; eerily surreal sights of a mother-to-be puttering around town in a Hazmat suit; and symbolism made literal, as when Ugetsu-like child phantoms materialize in wreckage from the waves.

Set in a country that prizes purity and conformity — and has a legacy of dealing with the aftermath of nuclear disaster — Hope may not leave you with hope, exactly. But it certainly imparts the expected horrors and unpredicted highs when the safe family home finds itself under siege, leaving on your mind’s eye the shadowy imprint of a woman, dressed in her finest kimono, dancing to festival music only she can hear, in the snow near a contaminated town reduced to tinder.