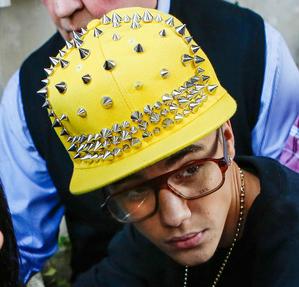 In the midst of Justin Bieber’s spectacular burn-out last week — in which the popthrob appears to ruined his 18th birthday sneaking minors into a club, been two hours late for a concert, collapsed at another concert, sworn at paparazzi, and generally become what we’d expect from an 18 year old whose life has been micromanaged ever since 2007 when YouTube got a hold of his DIY R&B covers — I had the distinct feeling that I’d read it all before.

And I had, kind of. The Love Song of Jonny Valentine by Teddy Wayne is a nice opportunity to tap into what Beeb’s inner monologue could sound like, should one dare.

On the phone this morning, I spoke with Wayne about whether others had picked up on the plot’s similarity to this week in Bieber. “People are starting to see the strange paralells,” he tells me.

But, Wayne says Biebs was merely a starting point for the book’s plot. “I read his own little memoir, I watched his documentary. But after that i deviated.” He read up on Jackie Coogan — one of the country’s first child stars who rose to fame in the Charlie Chaplin movie The Kid — plus Tatum O’Neil, Drew Barrymore, Michael Jackson.

But there’s no denying that the Jonny Valentine-Justin Bieber similarities are striking. The Love Song of Jonny Valentine is an entirely claustrophobic account of the titular, 11 year old (the age that Bieber’s career took off) top-tier moppet with adorably floppy bangs who sells out arenas, manages relationships via asinine interviews with schlock celeb gossip magazines, and is on, ON, onnnn unless obsessively playing video games. Valentine deals with an overbearing, flawed mother-manager and a troubling relationship with prescription drugs. He hooks up with groupies, terribly.

The book opens with this quote from a profile on the real Bieber in Interview magazine:

“I wanted to write about entrepernal narcissism,” Wayne tells me. “Meaning not just actual celebrities, but the way we all celebrate ourselves, posting about our vacations on Facebook, posting about the glamourous life we have.” The Internet is a boon to the self-absorbed, though it has had a disastrous effect on the lives of today’s child stars.

“The worst part is social media and digital photography means [young performers] can be busted for anything,” says Wayne. Although he notes that the Internet can certainly accelerate careers, “no one knew when Drew Barrymore was doing cocaine in nightclubs.”

In Wayne’s novel, Valentine eventually and not very lucidly realizes that he is being treated as a commodity. The realization, coupled with his extremely grueling schedule and horrific family situation pushes him over the edge. Perhaps it doesn’t take a genius to know that many child stars will end up this way, but The Love Song of Jonny Valentine goes beyond rubbernecking.

Its narrator is vapid (Says Valentine: “You can only control yourself, so it’s not how they act that matters, it’s how you react. The most successful celebs never lose control.”) but the story is not. The dissonance of an overly-adult situation narrated by a preteen gives the reader’s mind some time on the emotional playground. It’s also reminiscent of the way the endless barrage of “Stars: They’re Just Like Us!” features and tweets fake intimacy — with famous people, but also with our own emotions.

Oh dear, now Bieb’s gone and canceled Lisbon. Will Bieber pull through in one piece? I put the question to Wayne.

“I think he’ll probably be fine,” Wayne replies, unperturbed. “This seems like a bump in the road for him. He’s come this far, it looks like he has good management. I think Bieber will continue his world dominance.”

Maybe next year will be the best birthday ever? #takeabreakjustin