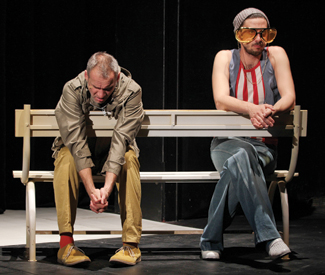 THEATER On two old VHS tapes in the collection of San Francisco’s Museum of Performance and Design you can watch the Eureka Theater’s 1991 world premiere of Tony Kushner’s Angels in America, a response to the AIDS epidemic and the reactionary politics of the Reagan era. It’s a low-fi document, with poor sound quality, but it’s completely riveting. Something more than the play’s words and images, as striking as they are, cling to that worn magnetic tape: there’s the electric excitement of a work of art cracking open its historical moment.

A similar frisson passed through the main auditorium of the National Theatre of Budapest last week, where I joined a group of international guests and a local audience for Romanian-born American director Andrei Serban’s production of Angels in America, starring as Prior Walter the National’s celebrated yet politically embattled artistic director, Robert Alföldi, an award-winning international director in his own right and one of the country’s most famous actors.

The production was the capstone of an impressive weeklong festival featuring some of the best work in contemporary Hungarian independent and state-sponsored repertory theater. Presented by the Hungarian Critics Association, in international partnership with Philip Arnoult’s Center for International Theatre Development and the Trust for Mutual Understanding, the Hungarian Showcase (March 2–9) encompassed a revelatory range of styles and talents. It also highlighted a theater actively responding to a rising tide of reactionary politics — reminiscent (especially in its overt anti-Semitism, homophobia, and anti-Roma racism) of the ultra-nationalism of the 1930s — even as the arts in general and theater in particular reel under the economic strain of the conservative government’s neoliberal agenda and attempted curbs on free expression.

The National’s production of Angels is just one instance of theater’s critical role in public dialogue in Hungary today, but in many ways it was the most poignant instance encountered. That’s in large part owed to Alföldi’s powerhouse performance in the lead — a muscular, charismatic performance, extremely witty and wrenching by turns — and simultaneously to his history as artistic director over the last five years. Since Alföldi’s government appointment in 2008, something extraordinary has been underway at the country’s premier stage. Previously, Budapest’s National Theatre had been better known for its kitschy postmodern edifice (opened in 2002 and made to resemble a rather gaudy ship aimed vaguely at the nearby Danube) than for the unexceptional productions on display inside. Under Alföldi’s brilliant and maverick leadership, the theater has come to be widely regarded as one of the best — if not the best — in the country, and attendance has grown dramatically, including among younger audiences.

Alföldi’s attempts to make the theater a place of inclusion and dialogue, meanwhile, as well as his lively and provocative interpretations of classic Hungarian nationalist texts like The Tragedy of Man and John the Valliant, have earned the disfavor of rightwing politicians — including members of the ultra nationalist Jobbik party, who were not above demonstrating noisily outside the theater to demand his ouster, and slandering Alföldi on the floor of the Parliament. Alföldi, popular and unprecedentedly successful in the post, has managed to stay on for his five-year term, but the government denied his application for a second term in favor of a well-known director with conservative political opinions.

In Serban’s considerably pared down version, Millennium Approaches and Perestroika together come in at just under four hours, separated by a short intermission. There are naturally some sacrifices entailed. The subplot involving Roy Cohn (played by the National’s brilliant János Kulka), for example, takes a big hit in terms of stage time. But whatever the faults of the production, the exuberant, ironical tone feels aptly knowing, as does the rotating stage set up like a cross between a dance floor and a merry-go-round.

In just one example of the production’s winking conversation with the audience, an announcement over the PA system at the outset of Part II reminds patrons in this former Soviet bloc country that the play is set in a far off land bearing little resemblance to anything close by — only to be followed by the familiar twang of an electric guitar as the Beatles’ “Back in the USSR” creates a musical bridge to a speech by the Oldest Living Bolshevik. Like Prior’s heavenly counselors, the Bolshevik urges a halt to history. The significance of the theme is unlikely to be lost on an audience facing the atavistic return to authoritarian models of the past.

While this isn’t the first time a Hungarian theater has essayed Kushner’s play, enough has changed politically in Hungary in the last few years to make this production, in which Alföldi assumes the role of the play’s cross-dressing openly gay hero, an act of brazen defiance as well as solidarity with all “outsiders” in the right wing’s narrow compass of nationhood.

“The world only spins forward. We will be citizens. The time has come,” says Alföldi as Prior. “The great work begins.” In its own call for “more life,” the National’s production captures something of the original life of the play all over again — defining the nation and its theater as a place of empathy and inclusion, of harmony in difference.

Meanwhile, tickets for Angels in America, widely seen as Alföldi’s farewell bow, are completely sold out.