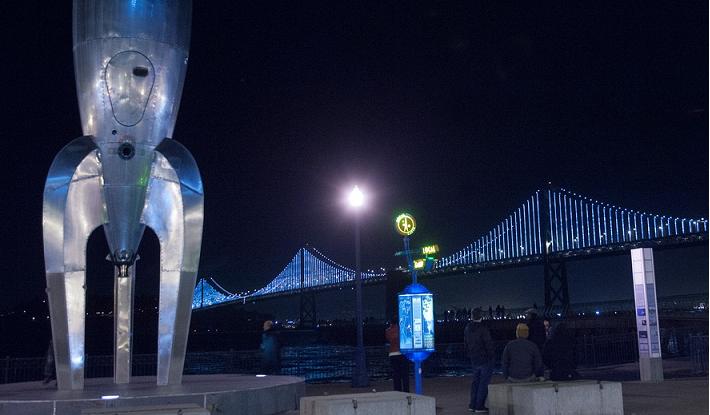 In the wake of The Bay Lights coming on to rave reviews and mesmerized gazes last week, next weekend the Raygun Gothic Rocketship will be taken down from the Pier 14 launch pad it’s occupied since 2010, the latest transitions in San Francisco’s trend of using temporary public art placements to bypass the protracted, emotional, and expensive battles that once defined the siting of sculptures on public lands in San Francisco.

By partnering with private arts organizations and calling the pieces “temporary” – even though almost all of them have been extended past their initial removal deadlines, sometimes by years – the San Francisco Arts Commission, the Port of San Francisco, and other local entities have allowed public art to flourish in the City.

The commission’s longtime public art director Jill Manton told us that temporary public art placements go back to the early ’90s, usually involving smaller pieces while big, years-long controversies continued to rage on over bigger pieces such as “the foot” that never went in on the Embarcadero, the Cupid’s Span piece that Don Fisher did finally place on the waterfront (and which many critics wish had been only a temporary placement), and a big, ill-fated peace sign in Golden Gate Park.

“It’s not as threatening to the public, not as imposing, so it doesn’t seem like a life-or-death decision,” Manton said of the trend toward temporary placements.

But the real turning point came in 2005 when then-Mayor Gavin Newsom, Manton, and other city officials began to embrace the Burning Man art world by bringing a David Best temple into Patricia Green in Hayes Valley, Michael Christian’s Flock into Civic Center Plaza, and Passage by Karen Cusolito and Dan Das Mann onto Pier 14 (a transition point that I chronicle in my book, The Tribes of Burning Man).

Each piece was well-received and had its initial removal deadlines extended. Since then, temporary placements of both original art and pieces that returned from the playa – including Cusolito’s dandelion in UN Plaza, the rocketship, Kate Raudenbush’s Future’s Past in Hayes Valley, and Marco Cochrane’s Bliss Dance on Treasure Island, which is now undergoing a renovation to better protect it against the elements during its longer-than-expected and now open-ended run – have enlivened The City.

“They get to rotate art and people get excited about what’s next,” said Tomas McCabe, director of the Black Rock Arts Foundation, a Burning Man offshoot organization that has helped with fundraising and logistics for most of the burner-built placements.

We spoke by phone on the afternoon of March 8 as he was working with Christian to install The Bike Bridge – a sculpture using recycled bicycle parts that local at-risk teens helped Christian build thanks to a grant from the National Endowment for the Arts – at the intersection of Telegraph and 19th in Oakland as a temporary placement.

The Bike Bridge will officially be unveiled on April 5 during the increasingly popular monthly Art Murmur, and the party will get extra pep from a conference of Burning Man regional representatives that is being held just down the block that day.

McCabe said the connection between Burning Man and the temporary art trend doesn’t just derive from the fact that Bay Area warehouses are filled with cool artwork built for the playa that is now just sitting in storage. It’s also about an artistic style and sensibility that burners have helped to foster.

“We try to help the art pieces have a life after Burning Man, but it’s more the style of community-based art that we promote,” McCabe said, noting that BRAF also helps with fundraising and other tasks needed to support these local art collectives. “We like to see the artists get paid for their work, we’re funny like that.”

Manton said there are currently discussions underway with San Francisco Grants for the Arts (which is funded by the city’s hotel tax) and other parties to put several large pieces built for Burning Man on display in either UN Plaza or Civic Center Plaza, a proposal Manton called UN Playa. “We bring the best of Burning Man to the city,” she said.

Most of the art placements in San Francisco have been labors of love more than anything, and a chance to win over new audiences. When the Five-Ton Crane crew and other artists placed the Raygun Gothic Rocketship on the waterfront in 2010, they had permission from the Port to be there for a year. Then it got extended for another year, and then another six months, and it will finally come down this weekend.

There will be final reception for the Rocketship this Friday evening (with music from the fellow burners in the Space Cowboys’ Unimog) and then the crane will come up on Sunday morning to remove it, in case any Earthlings want to come say hello-goodbye.

“The Rocketship and its crew have had a fantastic 2.5 years on display at Pier 14. Maintenance days were always a pleasure, giving us a chance to talk to people – and see the smiles and joy people got from the installation,” one of its artists, David Shulman, told us. “We’ve had tremendous support from, and would like to thank, the people of San Francisco, the Port of San Francisco, and the Black Rock Arts Foundation. But Pier 14 is intended for rotating displays, and we’re excited to see what comes next.”

Dan Hodapp, a senior waterfront planner for the Port district, said they don’t currently have plans for the site, although he said it will include more temporary art in the future. “The Port Commission and the public are supportive of public art at that location,” Hodapp told us. “But right now, we’re just reveling in the new Bay Lights and we’re not in a hurry to replace the Rocketship.”

Manton said The Bay Lights – the Bay Bridge light sculpture by art Leo Villareal that began what is supposed to be a two-year run (but which Mayor Ed Lee is already publicly talking about extending) on March 5 – has already received overwhelming international media attention and is expected to draw 55 million visitors and $97 million of additional revenue to the city annually.

“It is public art as spectacle. It’s amazing,” Manton said of the piece, which the commission and BRAF played only a small roles in bringing about. “It’s so good for the field of public art.”

She that the success of recent temporary art placements and the role that private foundations have played in funding them have not only caused San Franciscans to finally, truly embrace public art, but it has ended the divisive old debates about whether particular artworks were worth the tradeoff with other city needs and expenditures. And it has allowed the Hayes Valley Neighborhood Association and other neighborhood organizations to curate the art in their public parks.

Meanwhile, even as the Port gives Pier 14 a rest, Hodapp said another temporary artwork will be going up this fall at Pier 92, where old grain silos will be transformed into visual artworks, and that Pier 27 will be turned into a spot for a rotating series of temporary artworks once the Port regains possession of the spot from the America’s Cup in November.

As he told us, “The public really enjoys art on the waterfront, and they’re most supportive when we do temporary art, so there’s a freshness to it.”