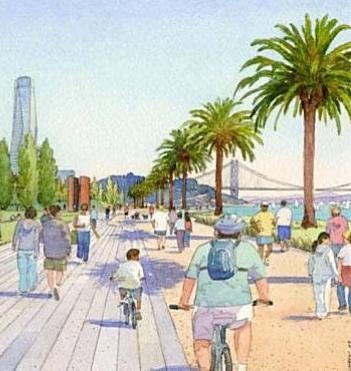 Now that he’s done such a bang-up job negotiating a deal for the CMPC hospital, leaving the supervisors to clean up the mess, does anyone think that the hurry-up-and-finish-in-time-for-a-China-trip talks with Rose Pak and Willie Brown (who has his own interests here, too) will have a good outcome for San Francisco?

Nothing the mayor has directly negotiated with private interests has been anything but a disaster for the city. America’s Cup, the Warriors arena, CPMC … the guy just can’t seem to say No. And you really don’t want someone who gives away the story to be representing the city when there are billions of dollars and the future of a huge new neighborhood (on a sinking island in the middle of a rising bay) at stake.

I still don’t see how intense residential and commercial development works on TI, when there’s only one overcrowded artery on and off the island. In New York, people who live on Staten Island are used to using the (free, heavily subsidized)  ferry — 60,000 a day take the boats into Manhattan. That’s going to be a huge stretch for people who live on TI, where there will be limited shopping (even for things like groceries) — and at this point, I don’t see the developer, or the city, purchasing and paying for enough cheap ferry service to make it an effective form of transportation.

That said, if we can make it work as a transit-first community, I have no problem with developing Treasure Island — but I don’t see Lee getting the level of civic benefits out of Lennar and the China Development Corporation that San Francisco needs to make this pencil out. Hasn’t happened yet.