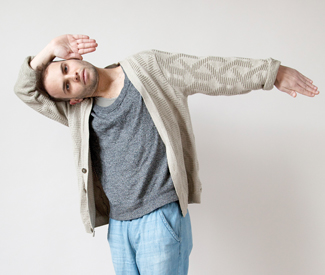 MUSIC Someone shared a song, with the caption “I’m pretty sure this is what the future sounds like.” At first I scoffed at the hyperbole, and idea that progress meant New Age-y Enya harmonies, speedy trap hi-hats, and stomping chant-along choruses all fitted into a progressive, genre blurring R&B/electronic package. But a little piece of the track, “Counting,” stuck with me, a familiar sounding free-jazz squonk of atonal saxophone, and I soon found myself starting a conversation with Autre Ne Veut, a.k.a Arthur Ashin, to identify the sample, and find out more about his sophomore album Anxiety.

“I actually don’t use any samples at all in my music,” the response came (surprising, since I’d seen Autre Ne Veut filed under electronic). “Not just a party line, but actually because I don’t have the slightest idea of how to build songs around them. Al Carlson, who engineered the bulk of the record, is also a very fine jazz sax player. Plus there is some extremely dry atonal guitar that I played mixed in with the baritone sax. Obviously, it was cut up a bit, but we both just played along to the whole track, and then stripped the bulk of it away.”

This refining, reductive process differs from Autre Ne Veut’s 2010 self-titled debut. “My previous record was kind of the opposite,” Ashin said “I would keep globbing more on in different places to kind of create song dynamics. With this I tried to create a big slab and kind of chip away at it, and the sound was kind of defined by that.” It’s a contrast that’s led Autre Ne Veut to be at times labeled as both minimalist and maximalist, although he shrugs at the categories. “Somebody compared me to Hudson Mohawke and Rustie, which I felt a little uncomfortable about just because I seem really different to me than that. But what do I know?”

Regardless of process, the result is an album of stark emotion, conveyed primarily through Ashin’s dynamic diva-esque falsetto. This is obvious on the album opener “Play By Play,” where a potentially repetitive chorus is carried beyond expectations to become irresistibly catchy. On “Gonna Die” the singer goes well into Whitney Houston ballad territory over the most open, airy track on the record, while somehow getting existential over seemingly little more than looking in a bathroom mirror.

Musically there’s a tendency to lump Autre Ne Veut in the latest wave of R&B, but the instrumentation (when it’s familiar) recalls Ratatat (“Don’t Ever Look Back”) as much as Prince (“Warning”), while the disparate, layered production puts Ashin in league with the aforementioned maximalist company. As a result of everything going on, the mix of elements occasionally threatens confusion or invites alternate interpretations. The husky singing and banging rhythm on “Counting” lends it a sensual tone that without context could be surprising: Ashin was inspired by the difficulty he had making a phone call to his aging grandmother, fearing it might be the last time they talk.

It didn’t help that prior to this album, Ashin insisted on embargoing his real name and only using the Autre Ne Veut moniker in the press, hoping to maintain a clean Google record, separate from his academic life, where he studied Clinical Psychology. Now he’s putting himself out into the open. “I basically for this record realized that if I was gonna end up doing music — if that ever became a legitimate problem than I would have done pretty well for myself, and there’d be no way to fight that if I decide to have a second career in Clinical Psychology.”

The new stance is a better fit; given the personal quality of Autre Ne Veut’s new record, there’s now an actual person to associate with the experience. (Although Ashin is fine with not being the final authority, saying “I’m not gonna sit down and tell somebody who’s sure ‘Counting’ is a sex jam to stop having sex to ‘Counting.'”)

If a second album is a chance to refine not only the music, but also the image, and Ashin seems to be doing the latter with unexpectedly little apprehension or nervousness. The press release accompanying the new album has the following heady quote: “Anxiety in children is originally nothing other than an expression of the fact they are feeling the loss of the person they love.” Freud is alright, but I think this one is more appropriate: “To feel anxiety is to be blessed by the full wash of existence in its ripest chancre.”