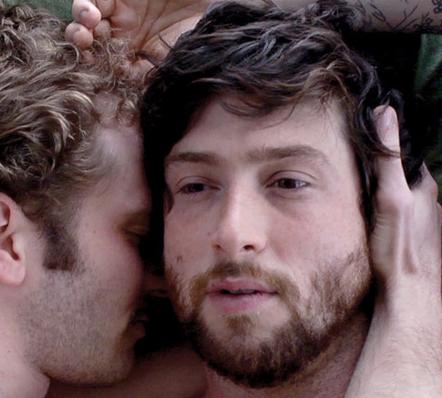 Look, James Franco is sad too. “This seems really silly,” the actor says, wearing an absolutely interestingly patterned t-shirt and blonde head of hair in the video statement below. “I don’t think we’d be having this conversation if he’d made a very violent film.” Franco and Mathews recently collaborated on the film Interior. Leather Bar., inspired by the 40 minutes of S&M footage excised from the 1980 Al Pacino film Cruising:

Just as it did in 2010 with Bruce LaBruce’s gay bloodbath LA Zombie, the Classification Board deemed I Want Your Love‘s sexual content “gratuitous.” The term struck a chord with I Want Your Love‘s supporters, who may fail to see the connection between their film’s depictions of real-life gay sex and LaBruce’s necrophiliac plotline/erect zombie prosthetics.

You can check out I Want Your Love on the Naked Sword website. Here’s Marke B.’s review of the flick from when it screened at the 2012 Frameline Fest:

I Want Your Love (Travis Mathews, US, 2011) Local director Travis Mathews’ first full-length feature — produced by porn impresario Jack Shamama and the good, pervy folks at Naked Sword — is so beautifully shot, edited, paced, and true to life for a certain young, scruffy, artsy fag demographic (not to mention brimming with explicit sex scenes) that you probably won’t notice that hardly anything happens plotwise. A cute performance artist named Jesse, played by one of our top performance artists also named Jesse, is getting ready to move back to Ohio due to those all-too-familiar San Franciscan money woes, but maybe also to forge some deeper connection to life. That’s about it. The true joy here is seeing most of the Bay Area’s gay underground arts scene nailing peripheral roles: Brontez Purnell hilariously steals the movie, cute naked gay boys abound, and the whole thing really does come off as a lovely West Coast boho version of last year’s UK indie hit Weekend, with more fog and condoms.