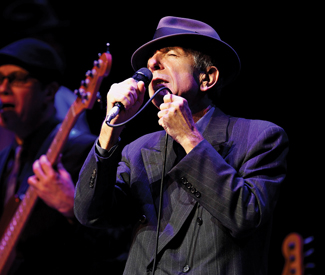 MUSIC Like most love affairs, there was little indication on our first encounter that it would turn into a lifelong infatuation. I was 17, methodically singing my way through a book of folk tunes, one of which was his first real hit, “Suzanne”. Though I admired it for its lyrical content, it weighed heavy on my range, and I soon moved on to other songs.

When I stumbled across him again, years later, it was as if we had never met. He was older, rougher, seemingly more jaded. His brutal ode “The Future” was dominating the indie-radio airwaves, hot on the heels of its appearance in Oliver Stone’s bombastic Natural Born Killers. When my then-roomie confessed a fondness for his music, it turned that single song on the radio into a sort of clarion call — the key, perhaps, to winning my flatmate’s frustratingly platonic heart. From that time, Leonard Cohen became a constant presence in my life, hovering at the periphery of countless triumphs, challenges, and betrayals, a companionship of almost 20 years that has spanned the globe, and almost every kind of circumstance.

There’s no one song or phase of Cohen’s music that seems to universally predicate the shift from uninitiated or fair-weather fan to true believer. For some it is the Cohen of the 1960s, whose laborious finger-picking and reedy, untrained voice lent equal gravitas to meticulously-plotted stories of resistance fighters and blowjobs, transcendence and squalor. For others it’s the synth-infused litanies to the naked body and the painful futility of the excess of the ’80s, or the flintier, world-weary renegade poised for flight of the early ’90s. Even the most contemporary of Cohen’s “masks,” the “lazy bastard in a suit,” currently rides a wave of almost unprecedented popularity, particularly in the US where he has mostly languished on the fringes of recognition until the last few years.

Underpinned by the spare minimalism of poetry written by a man for whom silence has played a pivotal role as much as language has (including a five-year long retreat at the Mt. Baldy Zen Center), his 2012 album Old Ideas brims over with themes that have appeared in almost every Cohen album over the last 40 years — bittersweet entanglement, elevation of the spirit, the struggles of the flesh — and marks a decided turning point in Cohen’s life, both personal and professional. An old Zen master of the music business arguably at the height of his powers: depression vanquished and horizons expanding exponentially.

Local author, rock journalist, and Leonard Cohen biographer (I’m Your Man, Ecco, 2012), Sylvie Simmons had her first encounter with Cohen in her adolescence as well, but for her the attraction was more immediate.

“The day I hit puberty was the day I heard my first Leonard Cohen record,” she confides over the phone when I call to get her side of her most famous subject. And though “it was outside my usual taste,” she found herself listening to his songs again and again, even today. Now deeply immersed in her own exhaustive world book tour, she’s even found a new thing to be impressed by: Cohen’s unflinching dedication to the road. “He’s got the kind of schedule that would kill an 18-year-old,” she says with a laugh. “He’s definitely a better man than I!”

Seeing Leonard Cohen perform at the Montreal Jazz Festival in ’08, after years of worshiping from afar, will always remain one of my most luminous memories. The prodigal son gone good, working the hometown crowd for an epic three-and-a-half hours, holding his hat over his heart as we applauded each song until our hands were sore, bowing his head humbly again and again, prophet as fellow supplicant. By a twist of good fortune, I managed to see him twice more on that tour — in Oakland and in Paris — and each time, though the controlled orchestration of the event revealed itself more and more, so did the sense of sheer joy emanating from both the stage and the audience, an orgy of admiration, and, a real rarity in the business, of gratitude.

Simmons has an explanation for this gracious humility as well. “He just loves life on the road,” Simmons explains. “He told me it was wonderful…’for a man my age to have a feeling of full employment’.” I rather suspect that this weekend’s events will be just as wonderful for us as they will be for him. Thank you, Leonard Cohen, for being our man.

“THE NIGHT BEFORE LEONARD” WITH SYLVIE SIMMONS