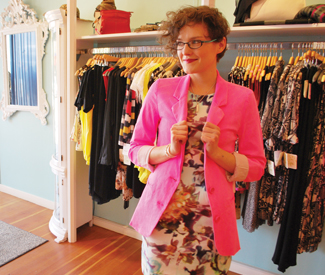 STREET SEEN As the author of a style column, I spend time trawling the city for innovative new local designers. Clothes that are made here, cute ones. Let me hear about them, I’ll put it in print, swear down.

But there’s not… that much of them. Speaking historically, of course. In the heyday of garment manufacturing, San Francisco churned out mountains of readywear — more than any other city in the country besides New York and Los Angeles.

Then we started to export our business overseas. You’ve heard about how Levi-Strauss used to have a factory on Valencia Street — not just the artsy pop-up shop they opened in 2010? Your jeans aren’t made here anymore guys, unless you’re copping from newbie “Kickstarter brand” Gustin (www.weargustin.com), Holy Stitch (www.juliandash.com), Self Edge (www.selfedge.com), or one of the other small local lines that have popped up in the denim giant’s wake.

These companies cater to locavore customers who “expect their clothing labels to read like restaurant menus,” as Modern Luxury put it in a 2011 article about the state of the SF garment industry. Making clothes locally means less turnaround time, less environmental impact — not to mention the sweet San Francisco cache that locally made palazzo pants hold.

Problem is, the garment factories that the industry needs have been greatly reduced in number.

In a Hayes Valley cafe, Gail Baugh sits at her laptop, shutting it with a morning-time, capable air when I sit at her table. Her outfit says boardroom, accented with exceptions. A beautifully-patterned scarf, and large brooch-like earrings suit this no-nonsense type with a degree in chemistry of textiles, 35 years of experience in the garment industry, and a byline on the book on fashion. Really, Baugh’s The Fashion Designer’s Textile Directory is a best-seller in its particular category on Amazon, she tells me.

She is the president and one of five founding members of PeopleWearSF (www.peoplewearsf.org), a Bay Area garment industry trade association that was formed in 2011 to fill the vacuum left by SF Fashion Industries, which played the role for 75 years before the garment industry collapse. PeopleWearSF’s members flip up to $25 million in yearly sales volume, though it also includes rank beginners in the clothes game.

“If you want a vibrant economy, you have to make stuff,” Baugh tells me matter-of-factly. Her organization — and SFMade (www.sfmade.org), the no-fee membership group who represents local producers and whose cheery stickers adorn a host of local retailers’ windows and product labels here in the city — provide networking opportunities to their members. These include 40-some brands, including outdoor label Triple Aught, longtime Mission District purveyor of pretty Weston Wear, and Babette, the flowing line of neutral-toned women’s wear based out of an Oakland warehouse. Those three manufacture locally, but not all PeopleWearSF members do.

Both trade associations work with public policy — specifically, through the Mayor’s FashionSF Economic Development Initiative — to provide more resources to the garment factories that were once much more prevalent in San Francisco. Efforts to keep the sew-shops open have to operate through a multi-pronged approach. It’s not just soaring rents that close the factories’ doors, but a dwindling high-skilled workforce pool that’s willing to work for the wages typically offered by the factories.

“Sharing resources, communicating issues — it’s a good business policy,” says Steven Pinksy, whose wife started Babette in 1968 and who was also a founding member of PeopleWearSF. Joiners, in other words, are welcome.