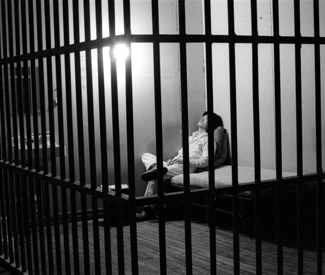 VISUAL ART “Silence,” the large new thematic show at Berkeley Art Museum and Pacific Film Archive, might have been titled in the plural, since it approaches silence from various angles phenomenological, political, and cultural. Co-curated by BAM/PFA and the Menil Collection, “Silence” takes its inspiration from one of the most famous 20th-century artworks in any medium, John Cage’s 4’33” (1952).

As you almost certainly already know, Cage’s 4’33” entails having the audience listen to ambient and accidental sounds of the auditorium while a pianist closes and opens a piano keyboard cover three times at set intervals but without touching the keys, both performing the difference between silence and quiet, and demonstrating the omnipresence of music wherever attentiveness is present. Cage’s work anchors the tone and scope of the show, and so from all possible kinds of silences, the exhibition limits to works by some 30 artists wherein silences are productive, pregnant, or impossible. Cage here is represented by scores for the performance as well as by several works that served as inspirations, descendants and tangents of his work.

Most directly, the show includes Robert Rauschenberg’s monochrome White Painting (Two Panel) (1951), which Cage cited as partial inspiration for 4’33” next to Ad Reinhardt’s all-black Abstract Painting (1965). If you know a bit of art history, then you get the curatorial statement here: aside from standing in for all sorts of minimalist silences, the yin and yang of Rauschenberg’s pregnant meditation juxtaposed with Reinhardt’s zero-degree absolutism are the boundaries for the gamut of representational possibilities that Cage and subsequent modernists have been sifting through. Of all Cage’s descendents, nobody gets that as well as Steve Roden, represented here by several conceptual and generative works based on 4’33”. Roden, who lives in Pasadena, crosses freely between sound and visual art in works that map, translate, and draw attention to the structures of sounds and the activity of listening. Alongside paintings and sculptures that take their generative cues from the text that accompanies the Cage piece, Roden is also exhibiting 365 x 433, (2011) three books of text that document and reflect on his daily performance of 4’33” over the course of a year.

Several other artists make explicit reference to silence and its relationship to listening, especially in social context. Brooklyn artist Jennie C. Jones uses materials commonly found in recording studios to make paintings that absorb and quench sounds in the spaces where they hang. Sustained Black with Broken Time and Undertone (2011) wraps around the corner on two walls of the gallery space, drawing attention to silence’s active relationship to architecture. Kurt Mueller’s Cenotaph (2011–13), a 100-CD jukebox filled with recordings of moments of silence called for by public figures, lays bare the thorny absurdity of state-imposed silence as ritual. On one jukebox panel, for example, you can choose between playing the moments of silence called for (from top to bottom) trapped miners, Michael Jackson, Corey Haim, or Ted Kennedy. Represented here by letters and photographs, Tehching Hsieh’s One Year Performance 1978–1979 (1979) casts silence as a form of cultural askesis. In that performance Hsieh locked himself in a cell inside his New York City loft for a year without talking, reading, writing, or entertainment.

Overlapping existential and cultural silences, the first gallery in the exhibition features several of Andy Warhol’s electric chair silkscreens (1965 and 1967), interspersed with Christian Marclay’s Silence paintings (all 2006), which appropriate a cropping from Warhol’s source photographs of the execution chamber and the “Silence” sign above the door that illuminated to alert attendees that the execution was about to take place. Also shown are extensive sketches from Marclay, showing his ongoing interest in these particular Warhols. As a framing device for the show, the pairing of Warhol and Marclay helps illustrate the pregnant potentials within Warhol’s bleak, lovely fascination with death imagery, and inverts the pairing of Rauschenberg and Reinhardt. Warhol’s particular silence, the attenuation and emptying of visual meanings through repetition, is taken up again by Marclay as productive fodder for an entire body of investigations.

Throughout February, film screenings addressing various kinds of cinematic and personal silences accompany the show. February 27, short experimental works that incorporate complications on sound and silence will include Darrin Martin’s Monograph in Stereo (2005), which addresses silence via hearing loss. *