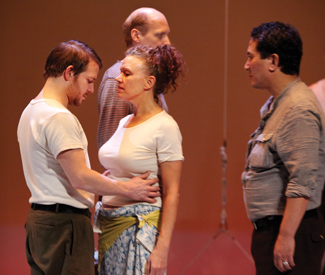 THEATER In a deceptively low-key but major theatrical event, Yerba Buena Center for the Arts last weekend presented the local debuts of both the Wooster Group and the New York City Players, in their collaborative take on three of Eugene O’Neill’s seafaring “Glencairn plays.”

It’s striking and not a little frustrating that San Francisco has never before been a port of call for either of these two world-famous and globetrotting experimental theater companies. Moreover, because this was a first-time collaboration between the two influential groups, Early Plays (as the O’Neill program is titled) was not really representative of either one of them. Rather, it was an intriguing, at times euphoric, at times baffling exploration fusing actors from both companies with relatively bare-bones Wooster design elements — all under the signature directorial style of NYC Players’ playwright-director, Richard Maxwell. Even so, it was a stimulating evening in which the attentive, open curiosity of the audience was palpable.

The triplet of early O’Neill one-acts — all written between 1913 and 1916 and featuring polyglot crew members of the British tramp steamer Glencairn —included, in order of presentation, The Moon of the Caribbees, Bound East for Cardiff, and The Long Voyage Home. In these short and atmospheric plays, O’Neill explores the hard, often brutal lives of sailors and other working-class people swept along by the winds of trade. But in paying attention to their distinct cadences, relationships, and dreams, the playwright also points to the lyrical nature of their lonely yet social lives, as well as flickering moments of transcendent experience amid coarse routines and unruly bursts of energy.

In this sense, they are not all that different from (and nearly as contemporary as) Maxwell’s own plays (like House, Burger King, Boxing 2000, or People Without History), which often delve into the mundane musicality of ordinary, inconsequential lives sideswiped by half-understood forces, churned by bumptious pretentions and bumpy social interactions, bewildered by quiet epiphanies. Indeed, Maxwell’s work comes shaded by his own original songs in which the banal takes unexpected flight.

But whatever their resonances, their plays remain a fat century apart in theatrical worldviews. O’Neill, learning from Europe and especially Stindberg, was inventing an American theatrical vocabulary still not entirely free of a certain melodramatic tradition. Maxwell and the New York City Players, on the other hand, represent a distinct and sustained attack on the stifling affects of the theatrical artifice that has accrued since then. And the Wooster Group has maintained a visionary re-imagining of the stage, its strengths and capacities, for nearly four decades (a project whose power and scope was clearly visible even on video in the three-weekend series of Wooster Group work screened at YBCA in the lead-up to the Early Plays premiere).

And so, what audiences encountered last weekend was a purposively monotone rendering of O’Neill’s rather overwrought dialogue, laden with a variety of archaic-sounding dialects that the actors dutifully articulated as written but, for the most part, without further embellishment or affectation. The action, meanwhile, unfolded with a deliberately subdued, knowing amateurishness on a Wooster-like set (designed by Jim Clayburgh and Wooster leader Elizabeth LeCompte) whose exposed gray-planed design featured a floating stage floor, supported by thin vertical cables, on which a skeletal framework of piping, bulging light bulbs, ropes, and pulleys combined in vaguely nautical abstraction.

Not that theatricality per se was absent: three of Maxwell’s workmanlike yet stirring ditties, for example, stitch together the O’Neill plays with simple, poignant, uninflected harmonies and rhythms as the actors smoothly reconfigure the stage. During Bound East for Cardiff, moreover, the stage was plunged into semi-darkness, sculpted by the warm glow of a few lantern lamps and the looming, slowly dissipating clouds blasted at intervals from a smoke machine, as main characters Yank and Driscoll (played respectively by NYC Players’ Brian Mendes and Wooster veteran Ari Fliakos) conferred at the former’s deathbed in a recessed, beautifully haunted corner of the stage. And in The Long Voyage Home, NYC Players stalwart Jim Fletcher (a riveting presence who is perhaps the quintessence of Maxwell’s forthright aesthetic, deflating and commanding at once) donned a too-tight barman’s vest and a toupee that looked like an animal roosting rump-forward on his head; while beside him Wooster’s luminous Kate Valk burst into and out of tears with a kind of blank perfection.

But it was precisely the melding of the clumsy and the graceful — and the volatile tension that arose between the purposely anti-theatrical and the inescapable pull of the plays themselves — that marked the production’s dissonant, quasi-Brechtian approach. In eschewing the usual cohesion, the production gave itself over to an admittedly not entirely successful but fascinating pursuit of what is much more rare: a sense of raw immediacy and authenticity, and a poetic capacity for unexpected instants of reflection. It’s an approach that wrestled with itself as much as the material or the audience, but it led to a refreshing sense of possibility and inquiry, and in it too there were moments when the lyrical and transcendent were given new life.